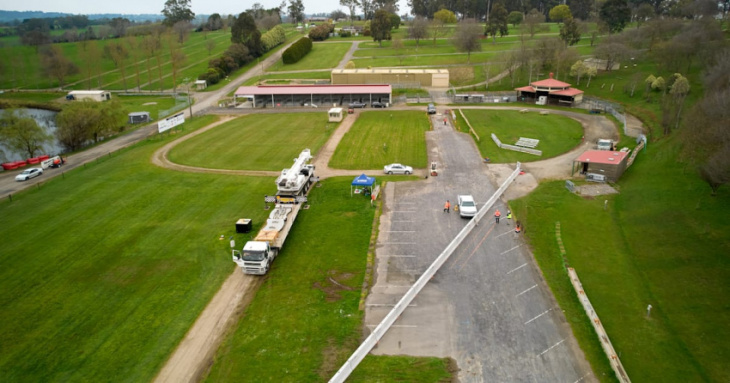 Tyre Stewardship Australia has announced that an experimental new road barrier has passed a 100km/h crash test, an achievement that brings it one step closer to market.

The barrier is constructed with rubberised concrete, which uses rubber crumb gathered from spent tyres, providing a means to reduce waste winding up in landfill.

The barrier, named Rubber T-Lok, is the result of work by the University of Melbourne’s Advanced Protective Technologies of Engineering Structures (APTES) Research Group, with funding and support from Tyre Stewardship Australia (TSA).

The barrier boasts safety benefits and longer lifespan, along with providing an economical solution for the various sectors that would use them, such as traffic management, event management, construction and mining.

The rubber crumb comprises four per cent of the concrete mixture, and according to the test results provided a 10 per cent higher total energy absorption compared to conventional concrete barriers. The test was conducted at Victoria’s Lardner Park facility, and involved launching a Chevrolet Silverado at the barrier to assess its impact.

Professor Tuan Ngo of the University of Melbourne said: “Road users are the winners here. The test showed that designed rubberised concrete road barriers will help reduce the force of impact thereby reducing the likelihood of injury and death, as well as being less damaging to the barrier itself. Debris emanating from shattered concrete road barriers, which may create another safety hazard after a crash takes place, is substantially reduced.”

According to Lina Goodman, CEO of Tyre Stewardship Australia, the organisation has already invested $8 million in 56 projects such as this that increase consumption of the 140,000 tonnes of used tyres which go to waste in stockpiles and landfill each year.

Darren Hotchkin, CEO of Saferoads, added: “This new product will enable Australia to recover 115 tonnes of used tyres for every 10 kilometres of the Rubber T-Lok road safety barrier produced.”

The barrier’s passing of this test is another step toward it reaching the market, but regulatory hurdles remain. “The next step for us now is to support the team from the University of Melbourne and Saferoads, in calling on regulators to expand infrastructure specifications to include this new product,” Goodman added.