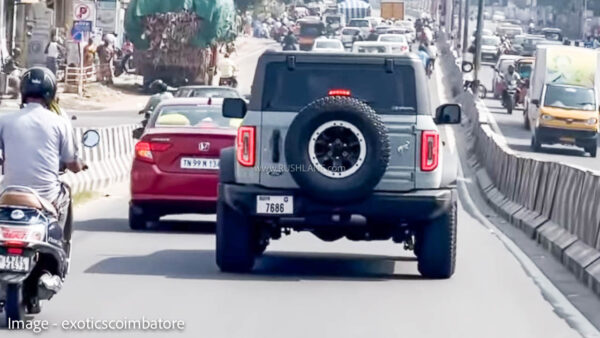 We all crave for a lifestyle off-roader, don’t we? It tickles the fancy of most people around the world. Some of the most iconic premium neo-retro lifestyle off-roaders include Jeep Wrangler, Ford Bronco, Mercedes-Benz G-Class, Land Rover Defender and more.

Although they are considered a niche and generally don’t really attract a lot of buyers unlike luxury vehicle buyers do. That said, this niche seems to be profitable as they are very popular and are gaining a lot more traction with new additions. In India, we get G-Class, Defender, Wrangler and more.

Since its absence from Indian market, Ford was rumoured to import CBU cars like Mustang Mach-E and more. It hasn’t materialised till now. Chances of Ford Bronco being brought to India via CBU route were meek. It hasn’t stopped Indians from getting one anyway. We now have a Ford Bronco on Indian soil. Let’s take a look.

To kick things off, this is not a Ford Bronco Sport. The one spotted in India, is the real deal. Ford launched two versions of Bronco on home turf. One is Bronco, which is a hardcore version offered with both 2-door and 4-door options. Secondly, we have the Ford Bronco Sport. This is less hardcore, doesn’t get a removable roof, gets a different design language and is visibly smaller.

The horse on a Bronco is galloping while it is sprinting on a Mustang. It is pretty evident the reason behind it. One is built for straight-line speed and the other is built for taking on the rough stuff. The galloping horse is found on its tailgate. Speaking of tailgate, Bronco gets a tailgate-mounted spare wheel while Bronco Sport has it tucked under its boot.

Ford Bronco Sport is not offered in the 2-door version. Americans call it a 2-door as they don’t consider the tailgate as a door as we do. Due to a darker tint on the glass area, it was not possible to see if it was an LHD or RHD vehicle. It was brought into India from Dubai via Carnet and was spotted somewhere in Coimbatore. Due to its massive size, it had an immense road presence. 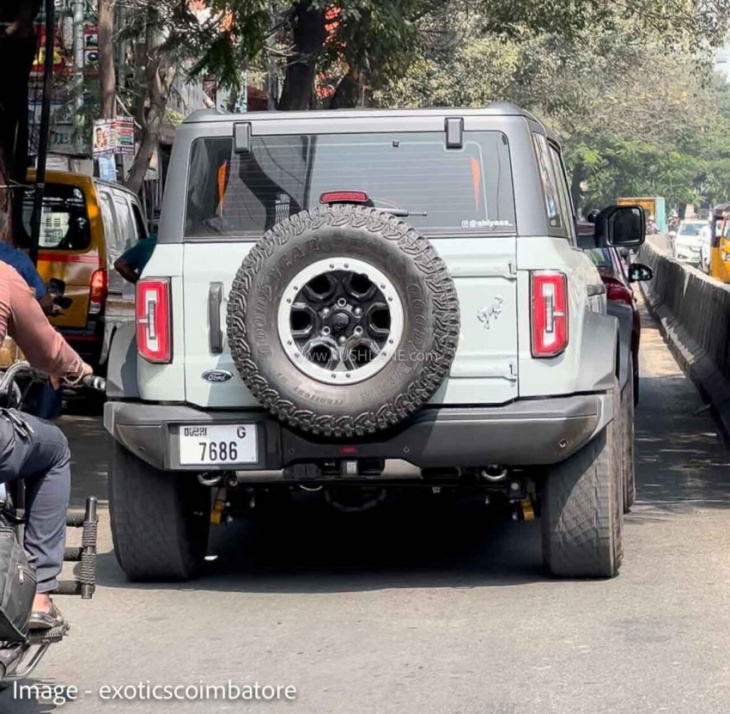 The 2022 Ford Bronco Is a Daily Driving Off-Roader

Battle of the Off-Road Oriented Base Models: The Budget-Minded Ford Bronco Two-Door vs Jeep Wrangler Two-Door

Tested: 2022 Ford Bronco Everglades Is Ready to Get Wet