Even though it is called Innova Kijang Zenix in Indonesia, India-spec Innova Hycross name rumoured, is retained 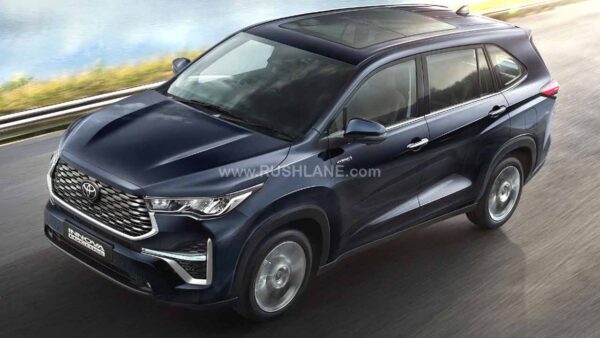 Toyota has launched its much-hyped India-spec Innova Hycross in the country. It ditched the Crysta suffix unlike in Indonesia, where Kijang suffix is included. It is a good-looking MPV-SUV crossover that is likely to be launched at a premium. Prices are not yet known. That said, one can generally expect prices to start upwards of Rs. 20 lakh (ex-sh).

Hycross is underpinned by a modern TNGA platform which is a monocoque chassis and gets an FWD layout that is lighter and more efficient. Unlike Innova Crysta which was underpinned by a ladder-frame chassis with RWD layout. With a modern platform, we also get modern features. India-spec Innova Hycross is launched in G, GX, VX, ZX and ZX (O) trims. Let’s take a detailed variant-wise breakdown to see what kit is offered with what trim.

Kicking things off, we have two different powertrain options to choose from, petrol and hybrid. Base G-SLF and GX models are only offered with petrol engine options. It is a 2.0-litre petrol motor (M20A-FKS), capable of delivering 174 hp of max power and 197 Nm peak torque. It is mated to a CVT gearbox only.

Base spec G-SLF trim doesn’t get alloy wheels, LED headlights, automatic climate control and more. It is offered in both 7-seater and 8-seater options. All four disc brakes are standard across the range along with ABS and EBD. A gun metal finish adorns G-SLF trim’s front grille. Base G trim in Indonesia is a lot more feature-rich and costs Rs. 25 lakh (approximate, on-road). 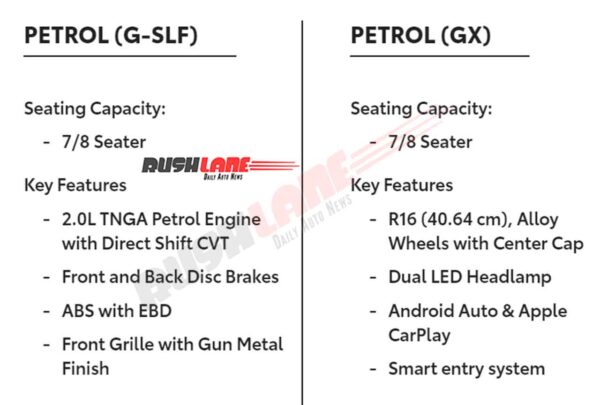 With the electric motor, combined power output is 186 hp and promises a fuel efficiency of 21 km/l. VX trim is the first one to get automatic climate control. Additionally, it gets paddle shifters, triple LED headlights instead of dual LED on GX trim, LED DRLs and LED taillights. To create a distinction, Toyota offers some chrome ornamentation with VX trim.

Until VX trim, Toyota offered an option between 7-seater or 8-seater layouts. ZX and ZX (O) trims only get 7-seater option with 2nd row being captain seats. ZX trim gets a powered tailgate and a larger 10” infotainment screen with wireless Apple CarPlay support. Audio system gets a big boost in the form of 9 JBL speakers which includes a subwoofer as well. ZX also gets powered driver seats with a memory function.

Now comes the top-spec ZX (O) trim which gets creme de la creme features. All the features that were present in the teasers or press material are only found on this ZX (O) trim. For starters, it gets the hyped panoramic sunroof, mood lighting, powered ottoman function which aids passenger comfort, 6 airbags, ventilated seats and Toyota Safety Sense suite.

Toyota should have made 6 airbags as standard in a car of this segment, but that might be a reality when 6 airbags mandate is brought into the picture. Toyota Safety Sense 3.0, has features such as lane keep assist and adaptive cruise control. India-spec Innova Hycross gets 7 colour options, Blackish Ageha Glass Flake, Super White, Platinum White Pearl, Silver Metallic, Attitude Black Mica, Sparkling Black Pearl Crystal Shine, and Avant Garde Bronze Metallic.


View more: How to Charge Your EV Without Being a Jerk

Midsize Two-Row SUVs With the Most Cargo Space

3. 2022 Ford Bronco Raptor 2. 2021 Genesis GV80 Prestige 1. 2021 Hyundai Santa Fe Calligraphy The most cargo space in midsize two-row SUVs When buying any vehicle, you’ll want to know how many things can fit inside. For SUV buyers especially, cargo space is essential. Who wants to buy a ...


View more: Midsize Two-Row SUVs With the Most Cargo Space

Prior to its June 2023 Australian arrival, local pricing and specifications for the 2023 Mazda CX-60 have finally been confirmed. Priced from $59,800 plus on-road costs and offering three models with three different drivetrains, the CX-60 is the first step of Mazda’s premium push in Australia, with other new ...

Three CX-60 grades will be offered initially, including the Evolve, GT and Azami, pictured here. Mazda has revealed official pricing for its first foray into premium territory, the CX-60, and the new SUV has high-end high-riding wagons in its crosshairs. Mazda has opened the order books for the CX-60 ...


View more: It's official! Mazda CX-60 official pricing confirmed, but how much is it compared with premium SUV rivals?

MG5 review: New, improved electric estate is better than ever

5 SUVs With the Best Gas Mileage You Must Consider

How Much Does a Fully Loaded 2023 Chevy Equinox Cost?

What Midsize Truck Has the Best Gas Mileage?