AUSTRALIAN Peugeot and Citroen importer Inchcape has had a difficult time of it in the last twelve months, with sales falling on all but a couple of French-branded models, but next year is looking up due to improved supply and new models such as the Peugeot 308 launched this week.

Some Peugeot and Citroen models have endured sales declines into double digits, at a time when the entire industry is struggling to get back on its feet after the seemingly never-ending waves of global and geopolitical drama.

Kate Gillis returned to Peugeot Citroen Australia as managing director in December 2020 after a previous stint as its GM of marketing. At the time, Peugeot was looking forward to launching the new 2008, facelifted 3008 and 5008 and the 308 in Australia.

As with many businesses, Ms Gillis suddenly had to deal with her workforce being banished to their homes, product supply all but dry up and buyers themselves sent home.

Two models least-affected by the fall in the figures are the 508 and the Partner van. Asked whether the brand was struggling due to market positioning or it was down to supply, Ms Gillis was emphatic that it was the latter.

“It’s definitely semiconductors and supply, we can see that all throughout the industry. So we’re looking forward to the time when this normalises,” she told GoAuto at the recent 308 launch in New South Wales.

“I think that we’ll start to see that improvement throughout every part of our business, so I’ve no doubt that with a new line-up, with the new 308 in our range, we’ll see that starting to take effect more or less as soon as it gets to market.”

Perhaps the most surprising performer is the 508 large sedan and hatchback, a market segment that has virtually evaporated over the past decade.

“I think it really comes down to what other options there are in the market,” said Ms Gillis of the 508.

“Arguably if someone is looking for a vehicle like that in terms of the sporting sort of style of a sedan and the fastback (then) that is appealing to some people so it’s placed very well within the market.”

Peugeot and its sister brand Citroen survive on volumes in Australia that would make other car companies give up. Cars like the 508 and more recently the C5 X have launched into a market with very low interest in these types of vehicles.

“Ideally, yes, we’d like to be growing within our market. There’s no doubt about that. But we match what we’ve got with what we need, and vice versa.”

While Peugeot got the 2008 and the facelifts out the door, the 308’s arrival was delayed until October 2022. The car itself has enjoyed critical and sales success in Peugeot’s traditional markets, which has meant a longer wait to secure supply.

However, Ms Gillis said customer communication about runout of the previous 308, followed by the announcement of a successor, has reduced the impact of delayed introduction.

The new 308 starts at a fairly stiff $43,990 before on-road costs in two highly specified trim levels. With the economy once again facing darker times with rising interest rates and the threat of a looming global recession, Ms Gillis did not rule out the reintroduction of cheaper Active and Allure variants.

“I think when an opportunity exists, we’ll certainly look at it. I don’t think we’re in a position where we say absolutely never,” she said.

“There are so many dynamics, which are currently at play. You never know what’s going to take hold and have an effect on the market. So it’s really for us best foot forward each and every time irrespective of what some of those external forces may bring us.”

Peugeot offers a range of three 308s in Australia, the most affordable being the GT Hatch, while stretching the budget an extra $5000 to $48,990 (before on-road costs) secures a GT Premium hatch. Another $1500 on top of that buys the wagon, in GT Premium spec only.

The wagon, in lieu of the premium audio, has a powered and gesture-activated tailgate.

Asked whether the lack of a halo performance model to rival popular hot hatches like Volkswagen’s Golf GTI would hurt the 308, Peugeot and Citroen national corporate affairs and public relations manager Chloe Fraser said that it was not part of the strategy.

“I think the GTI was certainly a model that was loved and admired and respected at its point in time, but it’s not something that’s part of the direction forward for the Peugeot brand, they’ve been quite clear on that,” she said. And I think what customers are looking for from the Peugeot brand, particularly in this market, is innovation, striking design and technology advancements,” she said.

“Of course, when the 308 range expands with the addition of the plug-in hybrid next year, that obviously is going to deliver a little bit more pep in its step and I think that will create its own unique appeal that will only enhance the overall appeal of the 308 range as it stands today.” 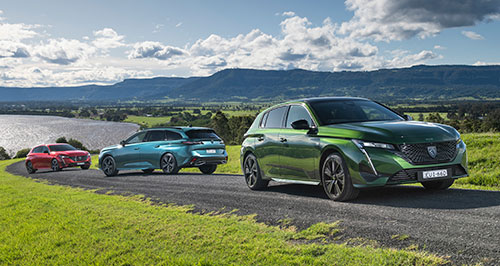