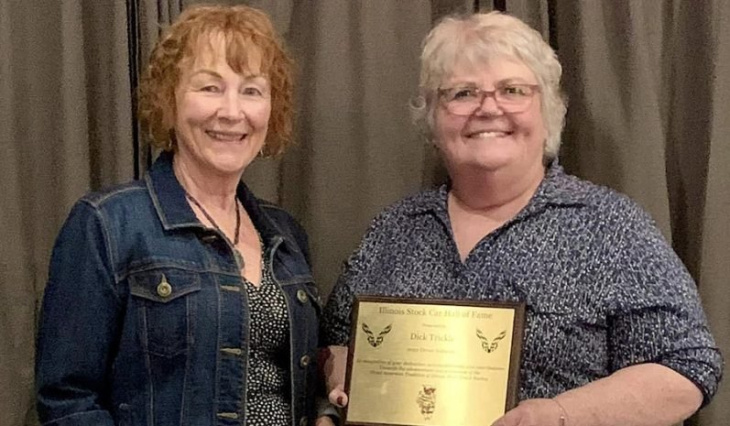 ROCKFORD, Ill. — With more than 200 in attendance, the annual Illinois Stock Car Hall of Fame banquet was held Saturday at the Hoffman House Restaurant with eight new inductees being honored.

Dick Trickle, the legendary racer from Wisconsin Rapids, Wis., won countless races throughout the country during his star-studded career, including many in the State of Illinois.  Wins at the Grundy County Speedway in Morris and at the Rockford Speedway during both Tri-R Racing and ARTGO Challenge Series competition in addition to his three wins in Rockford’s annual National Short Track Championships 200 were among main events won in the Illini State.  These were among Trickle’s estimated career total of over 1,000 short track victories.

Frank Reaber won three late model track championships at Chicagoland’s Santa Fe Speedway.  His final one was in 1995 – the final year of operation for the “Track of Clay.”  With his “home track” closed, Reaber continued his track championship-winning ways – winning titles at LaSalle Speedway in 1999, 2000 and 2004 and capturing the title at Kankakee County Speedway, also in 2000.  A sportsman division champion at Santa Fe before embarking on his late model career, Reaber attributed much of his success in racing to his dad, Pat.

Bob Dotter was a three-time champion with the Automobile Racing Club of America (ARCA), winning the titles in 1980, 1983 and 1984, driving for three different car owners.  Dotter finished in the “top 10” in the ARCA standings 13 consecutive years. He also competed on the old USAC stock car circuit.  Despite losing his right hand/arm in an industrial accident, Dotter began his speed career, first as a car owner, and later as a driver at O’Hare Stadium which was located in the shadows of Chicago’s O’Hare International Airport.  He began his late model driving career at O’Hare in 1964 and was voted the track’s “most popular driver” in 1965.

Joe Ross Sr. was a stock car winner on the dirt short tracks of Central and Southern Illinois.  Ross started his racing career in the mid 1960s and was a feature winner by the end of the decade, capturing his first feature win at Farmer City Raceway in 1968.  He was a three-time track champion at Joe Shaheen’s Springfield Speedway, winning the titles in 1977, 1978 and 1984 to go along with track championship honors at Farmer City, Macon Speedway and Jacksonville Speedway.  Ross scored his last feature win 1987.

Joe Fabrizius was the owner and promoter of the Sycamore Speedway until his untimely death in 2001.  He and his brother-in-law, Bob Oksas and other family members built the Bob-Jo Speedway, first for go-kart racing and later, in 1963, for stock car racing.  A motorcycle racer earlier in his life and a farmer his whole life, Fabrizius developed and nurtured his dirt track facility, which is located a few miles east of Sycamore, Ill., with family members still operating it today.

Roger Smith joined his dad, “Smokey” Smith as a member of the Hall of Fame.  Both were officials at Blue Island’s Raceway where “Smokey” handled the assistant starter and later the official starter duties at the speedway.  When “Smokey” suffered a mini-stroke in the early 1970s, Roger Smith took over the starter’s job at the track and was part of the officiating team until the track closed after the 2000 racing season.  Going to the stock car races when he was a kid in the 1950s, Roger Smith was even a driver himself, racing quarter midgets with the Midwest Motor Mites.  Roger and “Smokey” Smith became the first son and father combination to be inducted into the Hall of Fame.

Bob Novy was a top-notch car builder and mechanic after racing midgets and stock cars himself.  Later, he was a midget car owner before turning his attention to late model stock cars, primarily at Chicagoland’s Santa Fe Speedway.  Novy had drivers like Arnie Gardner and Larry Jackson wheel his cars on the clay at Santa Fe and at the Kankakee Fairgrounds Speedway.  Novy and Gardner won track championship honors at Kankakee in 1978.  At Santa Fe, Novy-wrenched cars won the track’s annual National Clay Track Championship 200 three consecutive times with Gardner winning in 1984 and Jackson scoring back-to-back victories in 1985 and 1986.

This year’s artist/sign painter inductee was Dan Colyer, who began his sign-painting, lettering career as a teenager, eventually going to work for Beverly Sign Co.  Later he founded Colyer Sign Co. in Blue Island, creating simple grocery store signs or doing detailed work at banks and office buildings.  After doing a little drag racing himself, Colyer got involved in stock car racing at Blue Island’s Raceway Park, buying an old Buick for 50 dollars and racing under the name of TV cartoon character, Boris Badenov – he didn’t want his mother to know he was racing.  He later changed his “racing name” to James Bond and he soon became a fan favorite with his “007” late model stock cars, competing until 1982.

The banquet’s guest speaker was Dave Watson, who began his driving career in late models at the Rockford Speedway in 1970 after helping short track legend Joe Shear when he was a teenager.  A Vietnam War veteran, Watson won track championships honors at Rockford in 1973 and also won the speedway’s National Short Track Championships 200 that same year.  He was an ARTGO Racing and American Speedway Association (ASA) champion, in addition to winning track titles at a number of Wisconsin raceways.

The day began at the expanded Historic Auto Attractions Museum in Roscoe, Ill., which is the home of the Illinois Stock Car Hall of Fame.  Family and friends of the new inductees were able to view the new members’ hall of fame displays.