I’ve built up a strong love for cute little EVs. I’m a big fan of the Mitsubishi I-MiEV, I wish I could own the Citroën Ami, and overall I think most new cars are too big for their own good. But, all of a sudden, a new hero emerges: the Baojun KiWi EV.

it's so sick that china actually makes this car. other car companies will bring wacky shit like this out at an auto show and never offer it but china's got the stones to be like “yeah here you go here's a freaky bug car with a little imp face” pic.twitter.com/QOVWtO3Ch5

Originally launched as the Baojun E300, this car is a strange collaboration between SAIC Motor (the owners of LDV and MG), GM (the owners of Chevrolet and Chrysler) and Wuling (a Chinese car company that specialises in people movers). Creatively named SAIC-GM-Wuling, SAIC owns the majority of shares in the venture but the majority of vehicles are sold with Wuling or Baojun badges.

Previously, the Chevrolet Spark (also known as the Daewoo Matiz M150, or the Holden Spark in Australia) and Baojun Lechi were developed under the venture.

So, when we look at it like that, the Baojun KiWi EV has a lot of interesting DNA in it, including from Chevrolet and Daewoo. 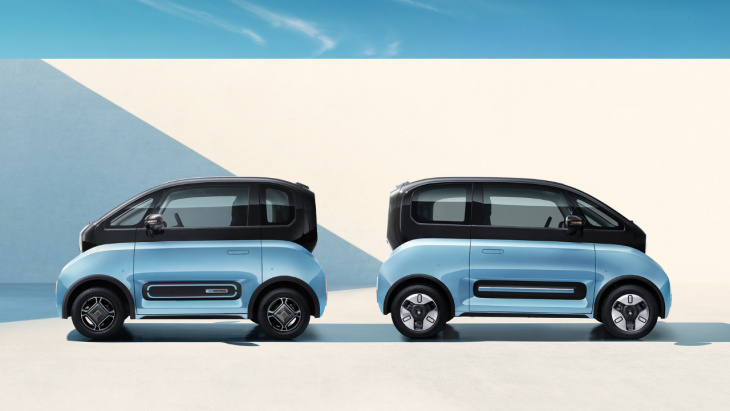 What is the Baojun KiWi EV?

A boxxy rear-wheel drive microcar with a scrunched-up pug-like face, the Baojun KiWi EV is a microcar with about 305km range (about 15km below the WLTP range of the cheapest EV in Australia, the MG ZS EV), according to Licarco. It features a 54 horsepower engine with an estimated U.S. price of $11,000, so about $16,500 in Australia.

It was launched in China back in September, but I’ve only just learned about it now. The company is also teasing a larger, higher-off-the-ground version of the car.

It’s a tiny car, with a max speed of about 105km/h, and a 0-100 in 22.3 seconds. It’s a smaller car for short treks, with a comfortable enough range for the city but not so much for the highway.

And, yes, those wheels are tiny, aren’t they? Unfortunately, however, I can’t find accurate dimensions for them.

It’s also noticeably more attractive than its predecessor, the Baojun E200, which looks somewhat like a Smart Car.

Will the Baojun KiWi ever come to Australia?

Like other microcars, such as the Mitsubishi eK X (in Japan), the Citroën Ami (in Europe) and the Nissan Sakura (also Japan), the Baojun KiWi is exclusive to the Chinese market, so it’s unlikely that it will ever come to Australia.

In researching this I discovered that you could get a remote control version in Australia, but not the real deal. Someone might set up an importing service, like in the U.S., but at the moment there are no official plans to sell it in Australia.

But I’m keeping my eye on it. I love it too much.

Keyword: I Look at This Cute Lil Baojun Kiwi EV and I See a Pug Face