On paper, a Subaru gets worse mileage than its rivals, offers a worse interior, and threatens buyers with startling bills. And I want one. 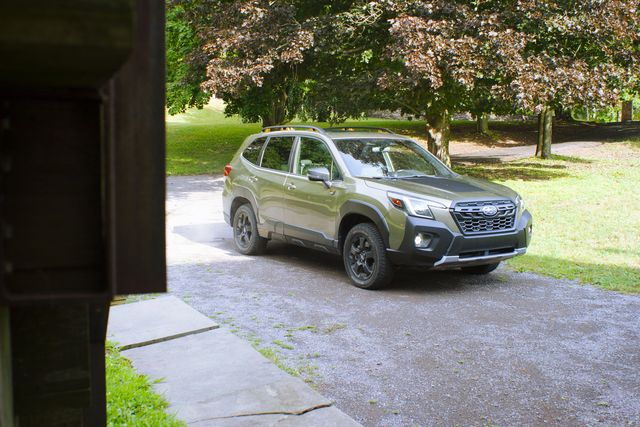 Subarus have some sort of spark, some sort of extra something that compels people to like them, yearn for them, buy them, and love them. There has to be, because, on paper, these cars don’t make strong cases for themselves. It was with this in mind that I took a Subaru Forester Wilderness out for a week and I hate to say, I got hooked.

Let me begin by ragging on the Forester in every way appropriate. 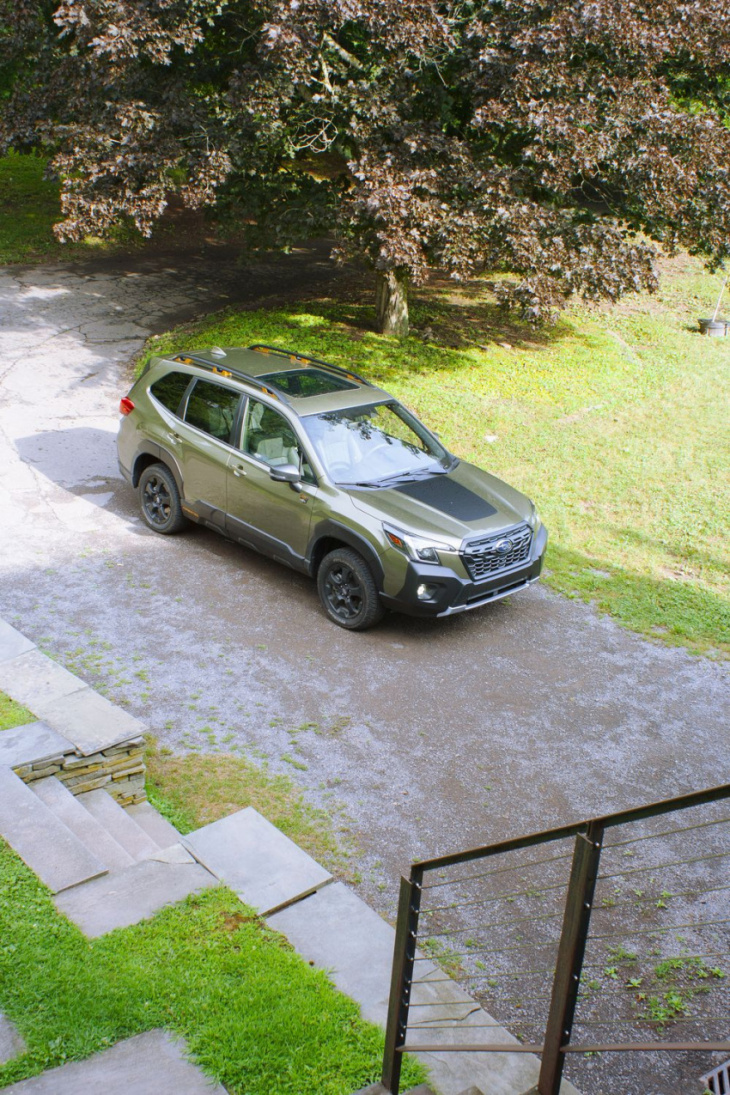 The first thing is probably the fuel economy. If you buy a different five-seat crossover other than a Subaru Forester, you will spend less on gas. I drove a base model Kia Sportage shortly before spending a week with this Forester. Not even the hybrid Kia. Not even on better tires; the Sportage was on A/Ts just like this Subaru. The Kia easily cleared 30 mpg. The Forester spent a week at 24 and 25. 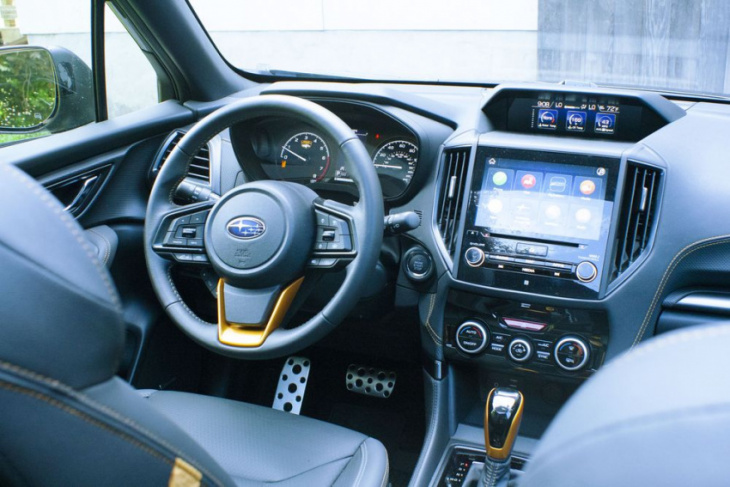 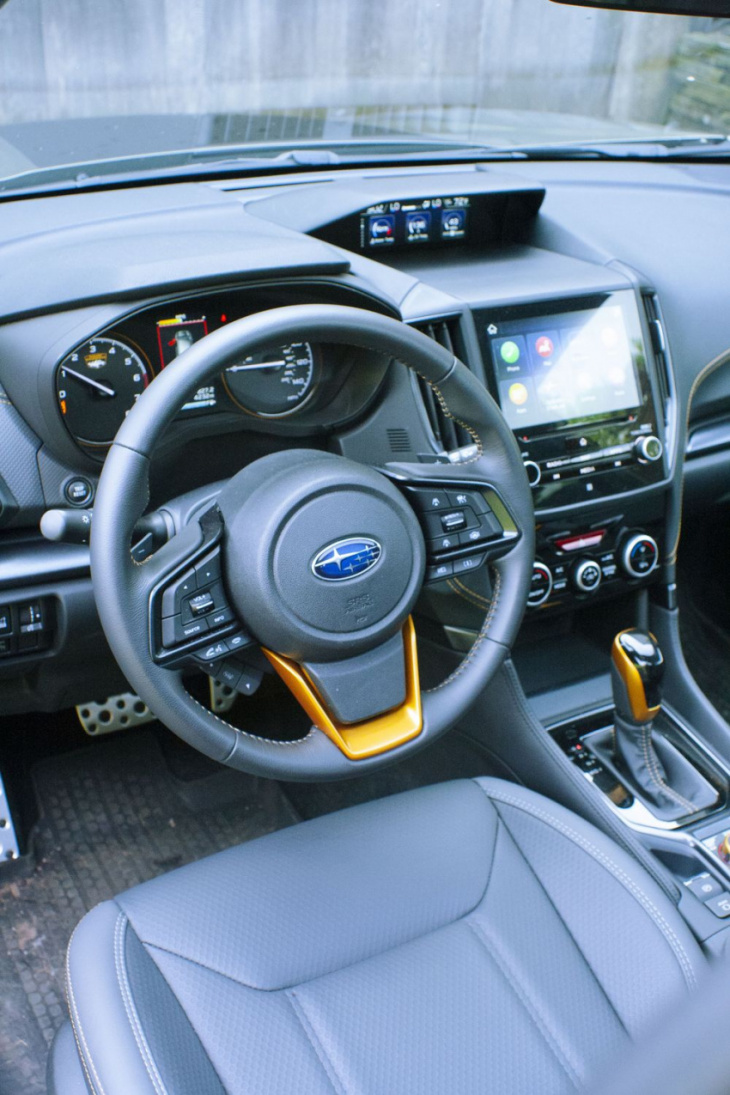 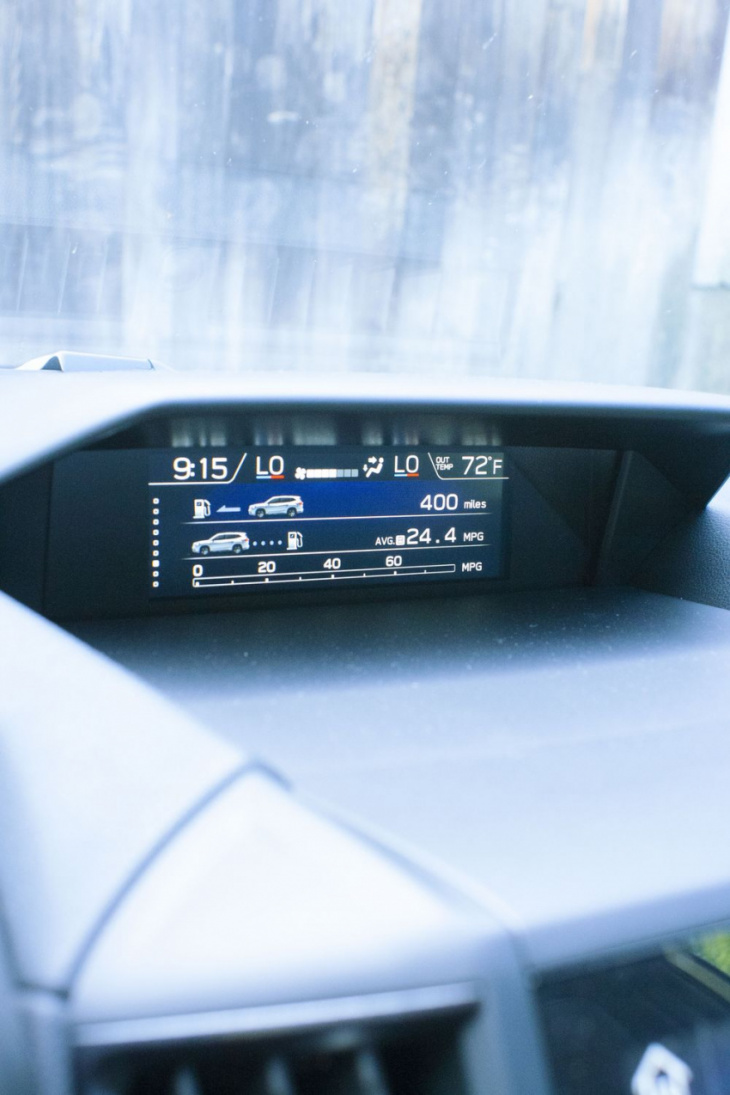 The second thing has got to be the interior. Again, I didn’t really like that Kia, as a complete vehicle. But I will say that it was nice to be inside, feeling and looking like a more expensive car than it was. Other than a completely incomprehensible overlapping music/climate control touchscreen, it was easy to use and live with. The Forester, by contrast, was ugly inside, with a protruding center stack that made the car feel less roomy than it was. And the quality of all the touchpoints was low! The shifter, for instance, looks and feels like it belongs on a gaming rig. 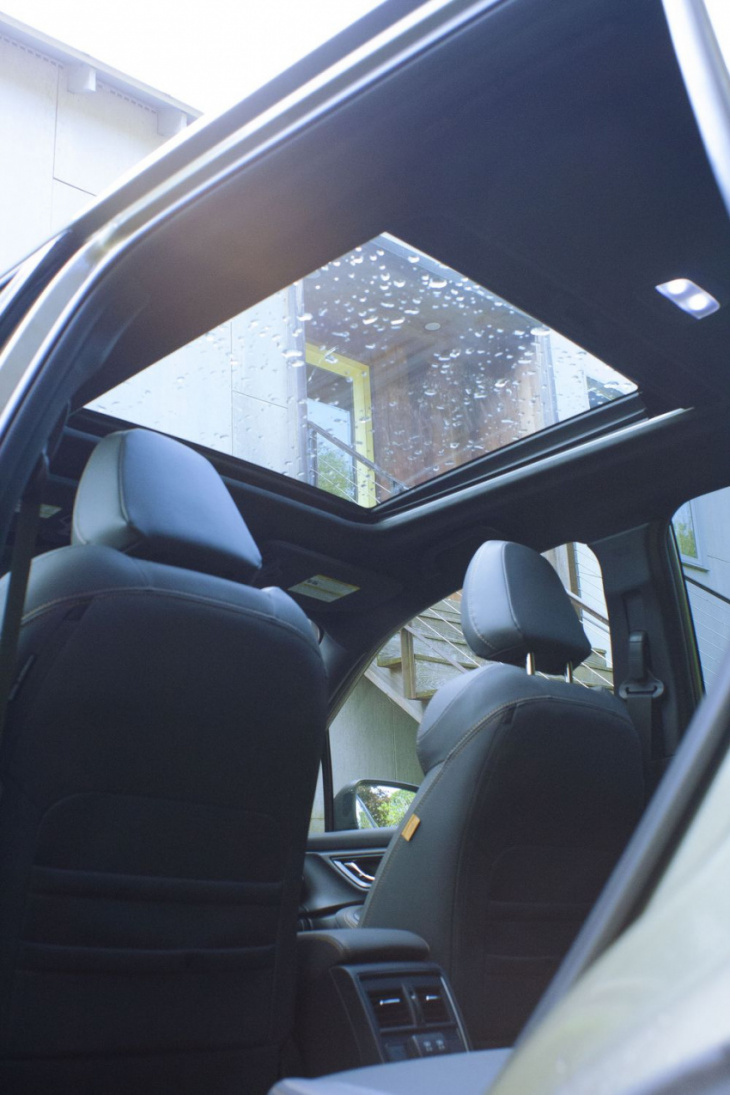 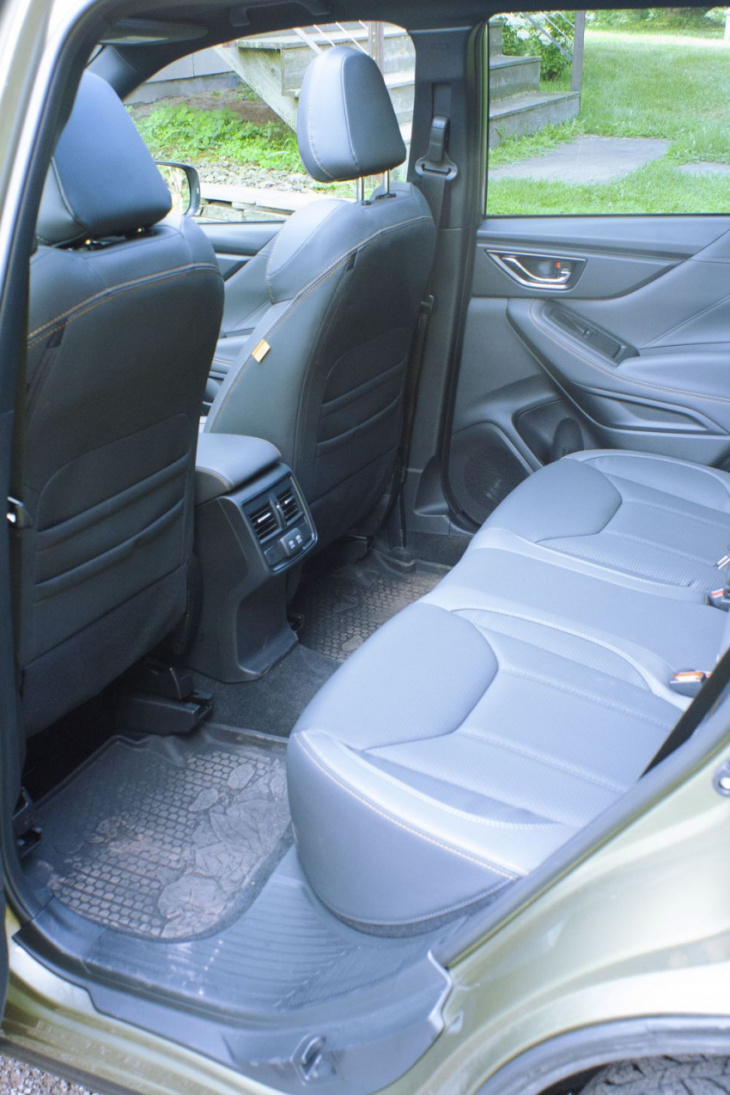 I also have to point out that while this is not an exceedingly small vehicle, it only seats five. There are no jump seats built into the back, like you get on a Mitsubishi Outlander. That Mitsubishi, also, has a nicer interior than this Subaru. 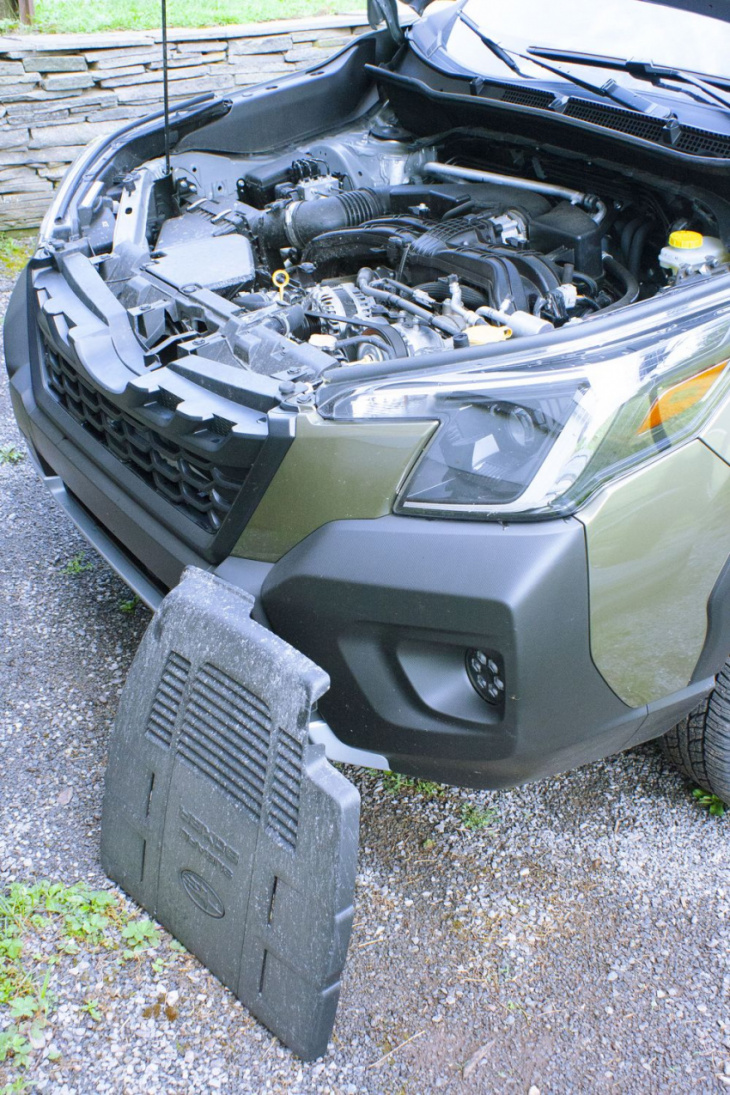 Then there is the specter of reliability. Toyota sells hundreds of thousands of RAV4s a year under the premise that its five-seat crossover won’t startle you with repair bills. A Forester, by contrast, is a head gasket repair waiting to happen, one that will cost significantly more than its rivals because Subaru remains a steadfast devotee of flat engines. Its four-cylinder has twice as many head gaskets as rivals’ four cylinders, rivals that use a mainstream inline layout for their engines. Does the flat layout make for any appreciable difference in how the engine performs? In how much power it makes? Even in how it sounds? Not really, from the perspective of this brand-new Subaru. 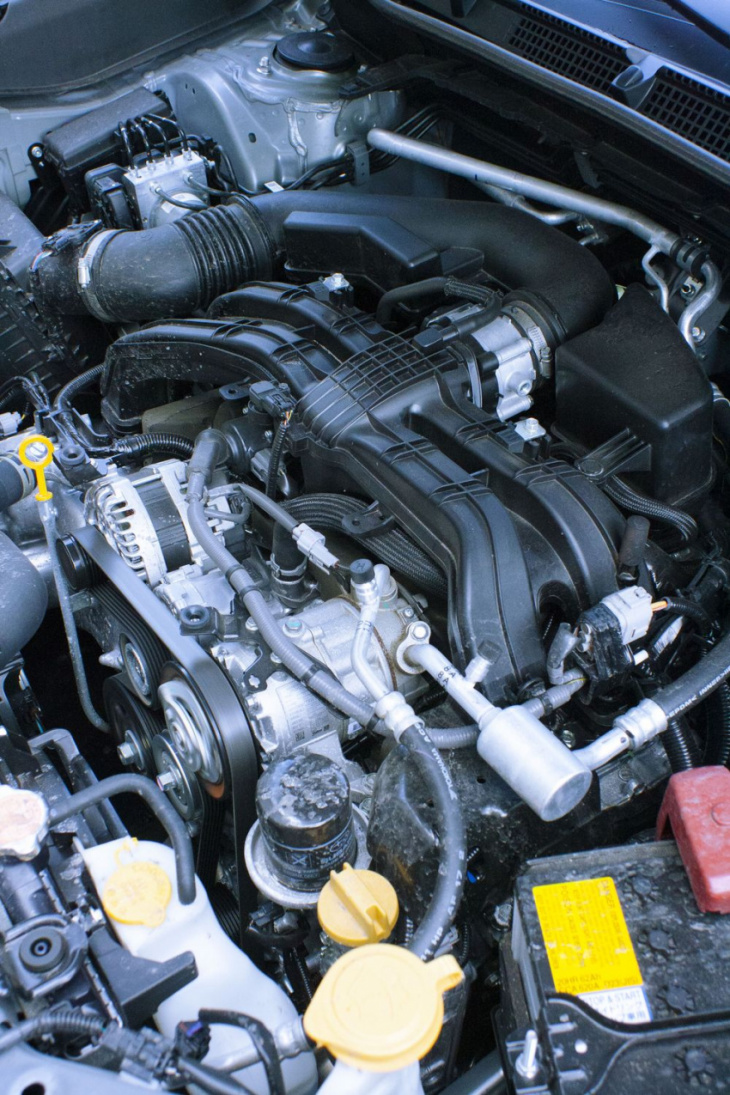 (If you are curious, the 2.5-liter FB25D makes 182 hp and 176 lb-ft of torque to push around the Wilderness Edition’s 3620 pounds, and it does it through a CVT. This is not a fast or spritely car, though I found this CVT to be relatively unobtrusive. The Forester drives fine. It is not in any noticeable way more sporty on the road than, say, a Chevrolet crossover.) 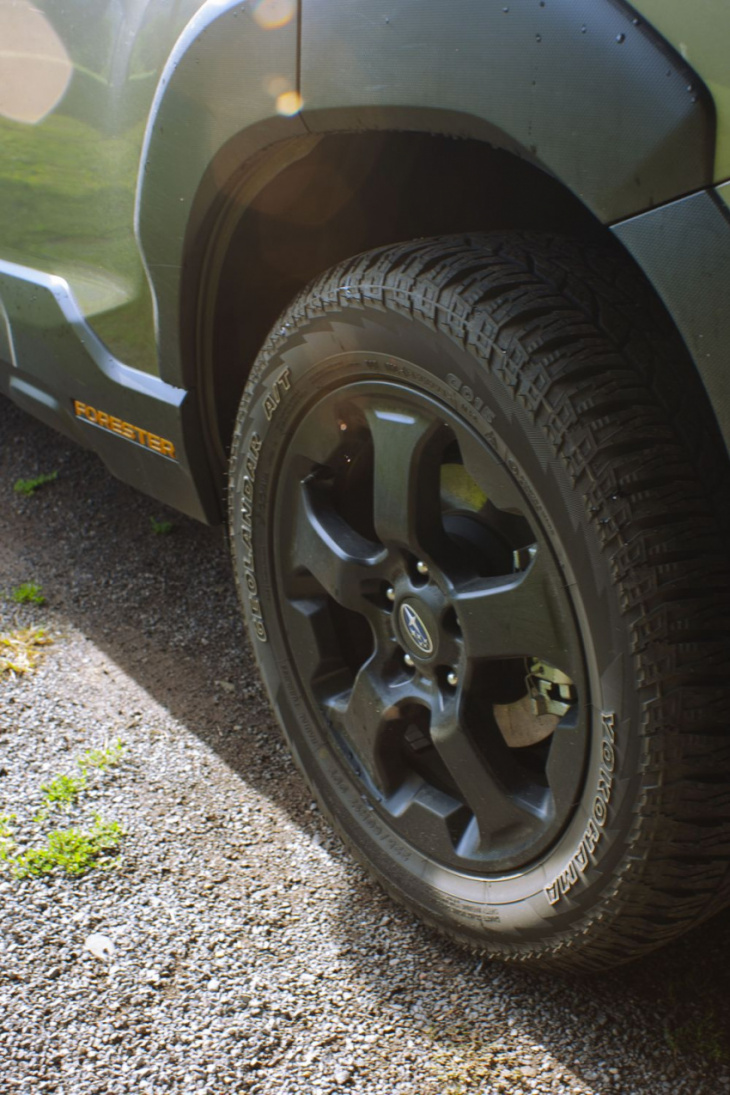 Every time I drove this Forester, I thought about how I could be in a different car. One with a better interior, one that cost less to fill up. This particular Forester, a Wilderness Edition, was optioned out to $35,795 including delivery. A Base model runs about 10 grand less and comes with normal tires, not all-terrains in 225/60 R17 99T. Certainly, you could get a base model and throw some Methods and A/Ts on there yourself, but you will miss out on the Wilderness Edition’s gold trim inside and out. I will also point out that the Base model weighs 166 pounds less than the Wildnerness, most of which I assume to be made up of plastic cladding. (It’s perhaps more to do with the wheels, tires, front skid plate, and transmission oil cooler.) 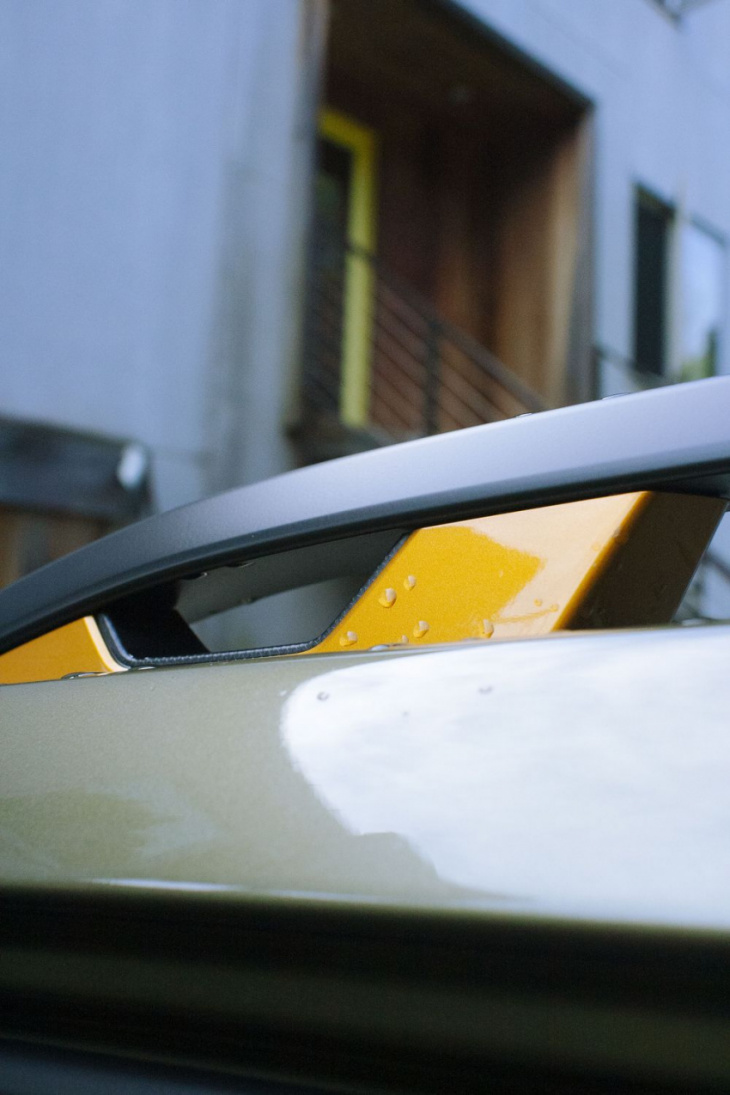 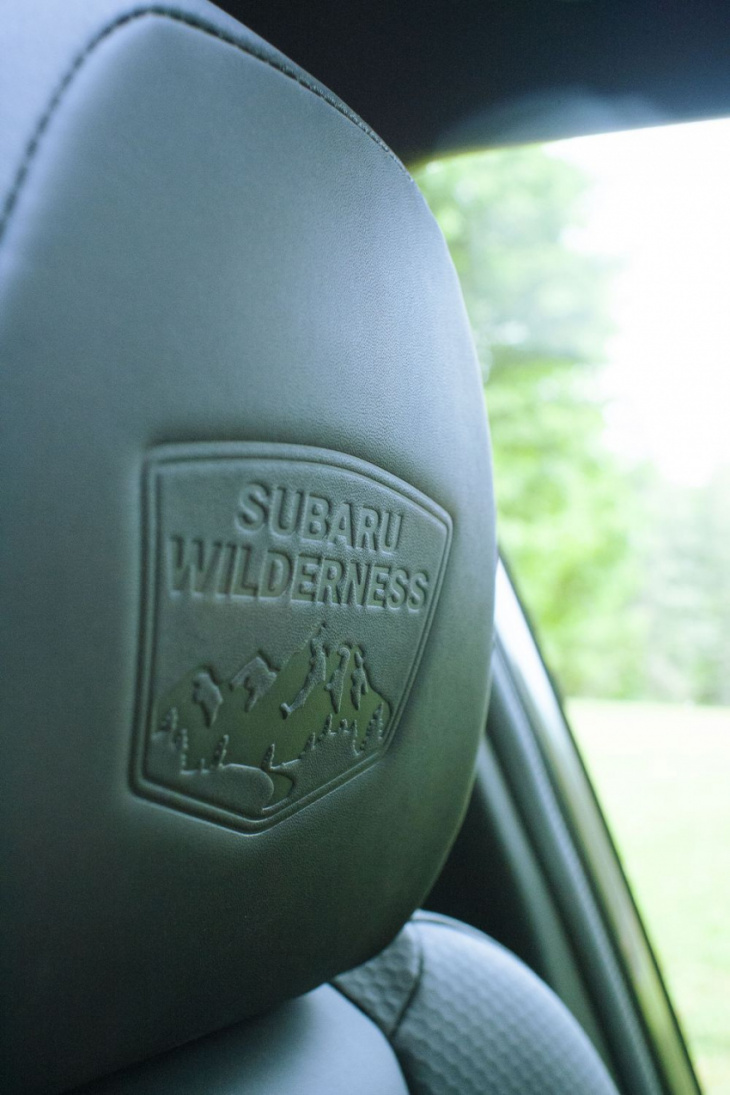 Every time I drove this Forester, I also thought about driving up and down the most rutted, torn-up double-track I could possibly find. I dreamt of hitting the most remote trailheads, salivated over the thought of a heavy winter, when I’d cut through un-plowed access roads and snowshoe through quiet forests, fresh powder untouched. 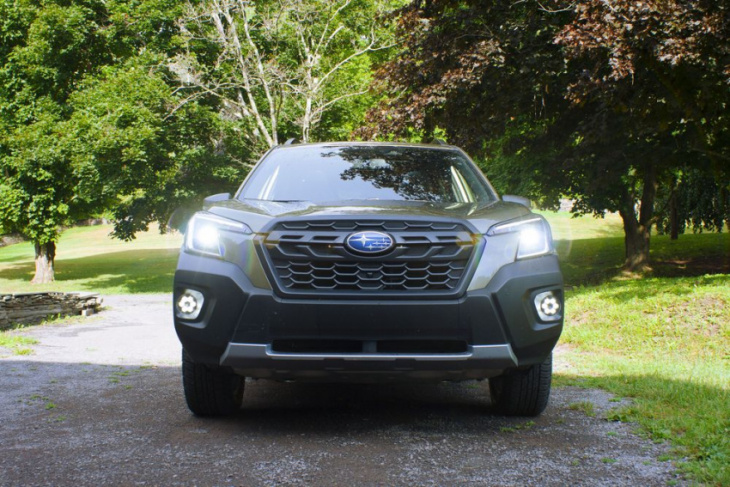 I am not sure what it is about this thing, but I’ve felt it in other Subaru products. The BRZ in particular is another car that on paper doesn’t match up to its rivals. It costs too much and makes too little power and the exhaust isn’t as sweet and the steering, even, isn’t as exciting as you’d hope. But still, you drive it and you want to tweak all of those things, modify all those systems, drive it and drive it and drive it some more. The same is true of the Forester. Other crossovers are more economical and comfortable, but the Forester has some sort of spark that turns you into a dreamer. A fool! You knowingly turn away from clear advantages other vehicles offer and instead choose a fantasy. You will be more outdoorsy. You will go farther, and deeper. The Forester has an almost truck-like quality. That you imagine, sure, I’ll definitely tow a boat this year. For sure. 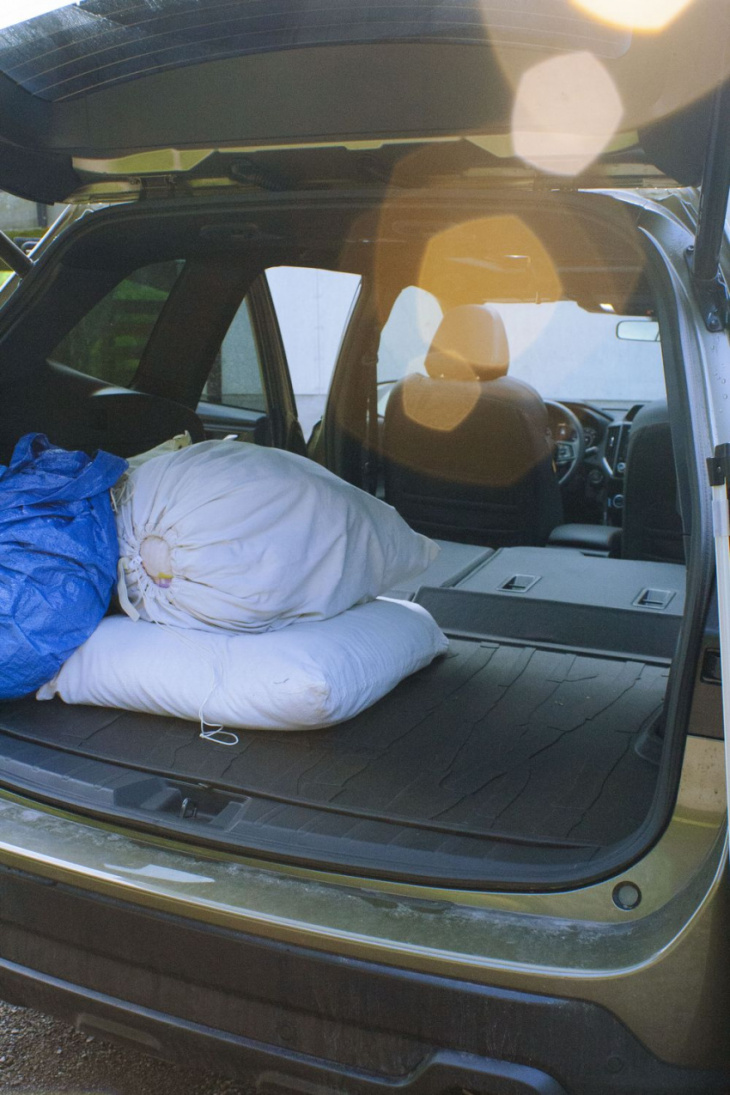 Hell, the Forester Wildnerness is rated to tow 3000 pounds, double the other trims of Forester. You could, if you planned it all out, tow a lil boat. I might be somewhat hesitant to do so as the very first thing you see the moment you step into the car is a warning printed inside the door warning you to heed your transmission temp light lest you grenade your vehicle. 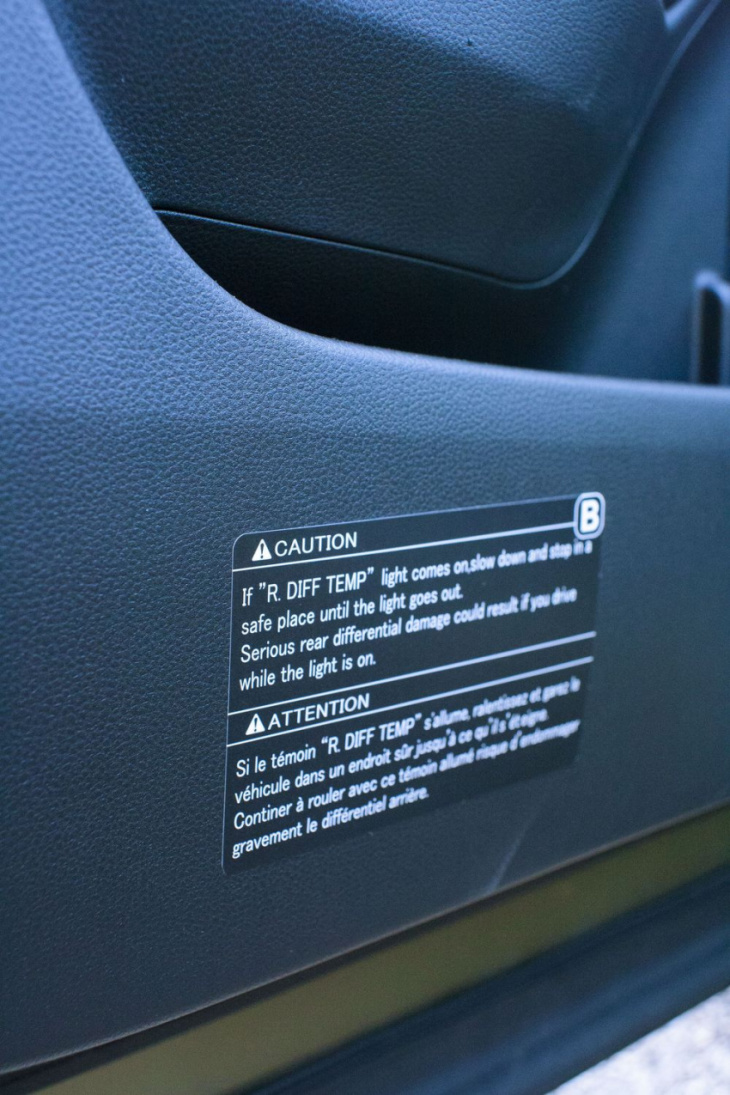 To put things another way, the Forester is a bland, ugly anodyne five-seat crossover with mediocre fuel economy pretty much all the time you are driving it. In a few moments, its all-wheel drive, 9.2″ of ground clearance, and respectable approach and departure angles make it a rather practical exploration vehicle. It’s not like the latter makes the former feel worth it; it’s that the latter seeps into your head all the other times that you are simply driving to the farmer’s market and back. The aura of “I could be carrying a couple of kayaks to a remote put-in right now” casts a glow over all your time in the car. Sure, what’s actually happening is you’re driving a 182-hp box around.

Of course, I am being marketed to. I’m a 30-something outdoorsy yuppie just starting to ask “shouldn’t I have a real car at this point in my life?” I am the target market for this car. I get drawn in that Subaru doesn’t sell itself on tech or economy. It sells itself on safety (which manifested as the most persistent and annoying seatbelt chimes I have yet encountered in a car) and on the idea that you’re not so much buying a car as a set of four-wheeled hiking boots. You buy a Subaru, you abuse it for 10 years, it crumbles into dust, and you buy another one. 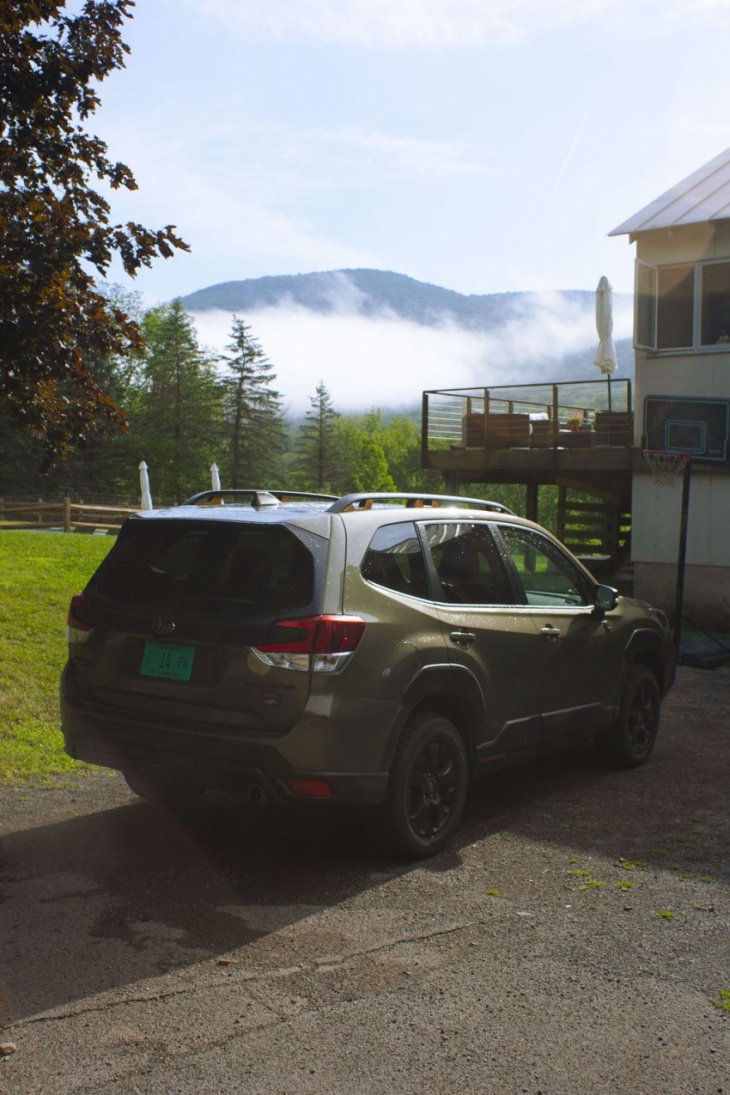 I get the Forester now. I always thought it was a weird middle child of the Subaru lineup. It was not appreciably bigger than an Impreza while not offering a great deal more practicality, a job that the Outback did perfectly. Having driven the Forester now, though, having heard the tinny clunk of its doors and smiled, I understand the appeal. The fascination. The Forester taps into a particular American psychosis. 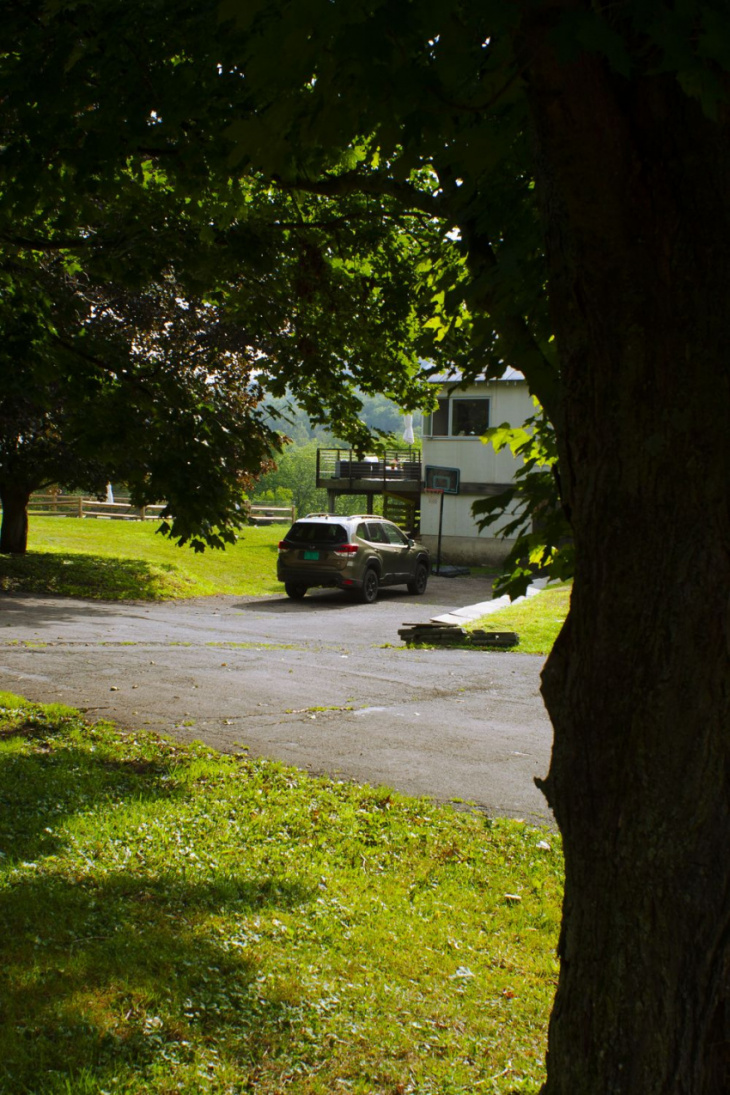 Aside from the marketing and the baggage and the psychosis, the visibility is great, the ride is comfortable, and there’s a good deal of room for cargo, particularly with the split-folding rear seats. Even if you only buy a Forester fantasizing about drives you’ll never do, you’ll still end up with a safe vehicle with tall windows. Worse things have happened to American car buyers than getting drawn into Forester ownership.

Raphael Orlove Road & Track’s Deputy Editor who once got a Dakar-winning race truck stuck in a sand dune, and rolled a Baja Bug off an icy New York road, and went flying off Mount Washington in a Nissan 240SX rally car, and…

Keyword: I Get Why People Buy Subaru Foresters Now

With a major refresh last year, Subaru has decided it’s not making any further changes whatsoever to the 2023 Forester. Well, except for the inevitable upward price adjustment. The base Forester now starts at $27,620, a $1,300 increase over the 2022 model. That base model comes standard with Subaru’s ...

You can't have a new 2023 WRX STI, but you can pretend with new custom parts from Subaru

Subaru has revealed a series of STI-style parts for your WRX. The disappointment about a lack of new Subaru WRX STI still hasn’t quite subsided for many fans, but there’s at least a glimmer of good news from Subaru with the reveal of a series of STI styling parts. ...


View more: You can't have a new 2023 WRX STI, but you can pretend with new custom parts from Subaru

Subaru is celebrating 10 years since the introduction of its BRZ sports coupe here in Australia with a 10th anniversary edition that is limited to just 150 units. It’s available to order now. The BRZ 10th Anniversary Edition comes packaged with a handful of unique styling tweaks over the standard ...

From 2023 onwards, the XV will be known as the Subaru Crosstrek Subaru Corporation recently unveiled the all-new Subaru Crosstrek, or as it is known here in Malaysia – the XV. While the vehicle has been called “Crosstrek” or “Subaru XV” depending on the market all this while, the “Crosstrek” ...


View more: Here's all you need to know about the all-new 2023 Subaru XV

What to expect Subaru Crosstrek The 2023 Subaru Crosstrek is slated for a South African introduction in April 2023, Subaru’s domestic subsidiary confirmed to TopAuto. The Crosstrek is the newest evolution of the XV, boasting improved ride quality and equipment along with a modernised design. At launch, it will ...


View more: When the new Subaru Crosstrek is going on sale in South Africa

How Much Is a Fully Loaded 2023 Subaru Legacy?

The Subaru Crosstrek Is Finally Getting One Hot Makeover

Is this the new Subaru XV? Next-gen Subaru small SUV set to be revealed next week!

The Best Used Subaru Impreza Sedan Years: Models to Hunt for and 1 to Avoid

Subaru Teases New SUV Coming September 15. What could It Be?

Subaru BRZ: All Your Questions Answered