Cleaning sensors is a dirty job but has to be done to provide accurate data so AV systems can operate safely and reliably in all weather conditions. This has prompted the development of several technologies to keep sensors clean. 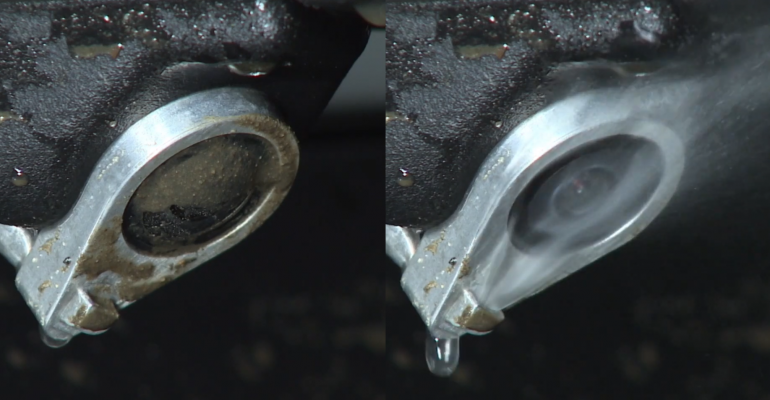 Most of the early testing of autonomous vehicles has taken place in locations with warm, sunny climates such as California, Arizona and Florida.  This allows AV developers to avoid the issues and the added variables related to adverse weather conditions while they build and test the basic systems and software.  Dealing with snow, rain, fog, smoke, dust, mud, insects, darkness and glare are issues to deal with later.

Meanwhile, both established companies and innovative startups have had the good sense to look further down the road when adverse conditions would foul the lenses of sensors with moisture and dirt.  A number of approaches are used to keep sensors clean, including pressurized liquids, heated fluids, vibrating liquids and air jets.

Putting sensors behind the windshield seems like the simplest solution, until one realizes that the lower part of the glass, where cameras and sensors are located, can be difficult for wipers to clean.  Also, glass is opaque to infrared sensors, and lidar and radar beams can be reflected back into the vehicle, reducing range and resolution.

In addition, most sensors need to be arrayed all around the vehicle to provide 360-degree visibility.  Therefore, most solutions are focused on keeping sensors clean or cleaning them once they become obscured.

The most obvious solution is to just squirt something like windshield wiper fluid to clean the lens.  dlhBOWLES has had systems in development and demonstration for OEMs including General Motors, Ford and BMW since 2016. The company sells nozzles that integrate with the windshield squirter system to keep sensors clean.

In 2017 Continental announced a self-cleaning system for fish-eye cameras that connects to a vehicle’s water or wiper fluid container.  The Clēr system from Rapa also connects to the vehicle’s existing washing system and uses solenoid valves in a fluid control unit to deliver pressurized liquids to clean lenses.

Unfortunately, liquids bring challenges related to capacity and sustainability of cleaning on long trips in difficult weather conditions.  Air jets have the advantage of not needing reservoirs for liquids that add weight and space requirements.  Liquids also run out if not refilled, meaning sensors can become obscured and unreliable.

Companies such as Actasys are developing cleaning systems for vehicles with ADAS and AV capabilities.  The company is a CES 2022 Innovation Awards Honoree for their ActaJet sensor cleaning system that uses small, focused jets of air to keep sensor lenses clean and is powered by small actuators in a self-contained cartridge.  Actasys is working with several OEMs including Volvo and Hyundai to test the ActaJet system in various weather scenarios.

Another approach is to use ultrasonic vibrations to transfer dirt from the lens surface to a thin liquid layer.  The technology uses piezo electronics to generate an ultrasound frequency of around 35 kHz.  Instead of using a pressurized liquid, a thin film of water or cleaning fluid is applied.  The vibration of the lens then causes the microscopic implosion of bubbles that collapse on contact with a surface in a process called cavitation.  This process transfers dirt into the fluid which is then atomized by the vibration, taking the dirt away from the surface with it.

Air Squared uses a novel approach designed to divert dirt, debris and precipitation away from sensors. T he technology uses a continuous flow of high-pressure air from an oil-free scroll compressor to prevent debris from landing on the sensor.  The constant upward flow of air redirects the oncoming air stream to push it up and over the sensor.

Ford’s sensor system (PDF) uses slots near the sensor to direct air away from the lens to keep it clean.  Slots in the sensor system funnel air to form an air curtain to deflect the vast majority of bugs and debris around the camera lens.

The Ford development team went so far as to build a makeshift “bug launcher” to shoot insects at vehicle sensors at high speeds.  That would be something to behold!  A few bugs still get through the air curtain, so Ford added a liquid spray washer to clean sensors when they do get dirty.

In addition to cleaning systems, sensors need software to detect when they are obscured.  Ford’s system, for example, uses software algorithms to determine when each sensor needs cleaning so they can be sprayed individually, then dried with an air nozzle system.

This kind of intelligent, hybrid system may be the best solution for the long term for keeping sensors clean and functioning reliably, as well as reducing the need for large fluid reservoirs.