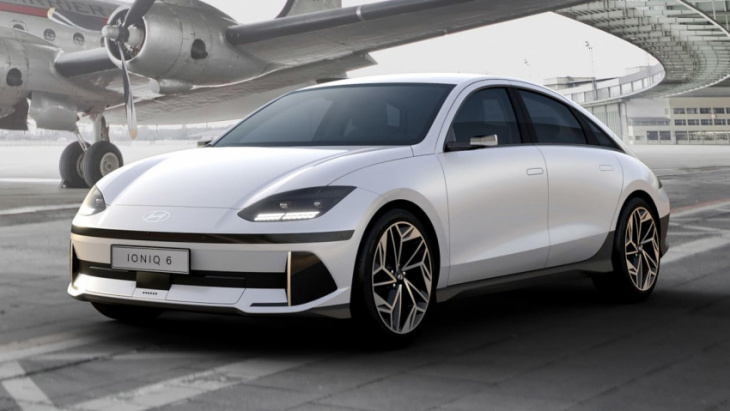 The Hyundai Ioniq 6 is now available to order, with prices starting from £46,745 – around £2,000 less than an entry-level Tesla Model 3. Not only does the new Hyundai EV beat the American EV titan for price, but its potential 379-mile range is also class-leading – although, launch models with larger wheels won’t be able to go quite as far.

Following on from the success of the Hyundai Ioniq 5, the Ioniq 6 adopts a svelte saloon silhouette as well as a space-age interior. Aside from the aforementioned Model 3, Hyundai’s electric executive car also has its sights set on the likes of the BMW i4 and the forthcoming Mercedes EQA saloon.

Ioniq 6 buyers can choose from two distinct trim levels: Premium and Ultimate. Likely to be the biggest seller, the entry-level Premium lives up to its name with a hefty amount of standard equipment. This list includes adaptive LED headlights, 20-inch alloy wheels, power-folding mirrors, dual-zone climate control, electric and heated front seats and a reversing camera. This model starts from £46,745

For around an extra £3,500, the Ultimate model boasts several luxuries such as ventilated leather seats, a BOSE sound system, a panoramic sunroof, a host of upgraded safety systems including blind-spot monitoring and a 360-degree camera setup. 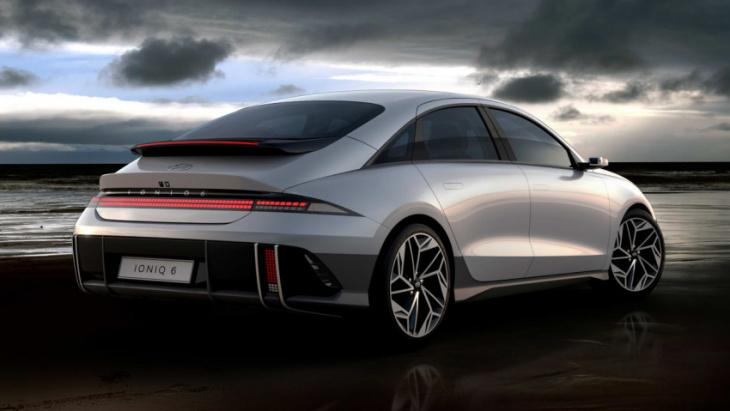 The Hyundai Ioniq 6 is based upon the South Korean brand’s ‘Prophecy’ concept car which made its debut a few years ago. Apart from its sloping roofline, another distinctive feature is the Ioniq 6’s long wheelbase – the distance between the wheels – which grants it lots of interior space. Large 18- or 20-inch alloy wheels can be specified and a set of optional ‘virtual’ door mirrors use cameras rather than glass – a feature seen on quite a few electric cars, including the Honda e and Audi e-tron.

Like the Ioniq 5, the Ioniq 6 has large LED lights at the front and rear, reminiscent of 8-bit graphics. There’s a small spoiler above the badge and the lower part of the rear bumper is black, which contrasts with the rest of the bodywork. While the car has often been shown in similar satin paintwork that’s already been seen on the Ioniq 5, plenty more colours will be available. 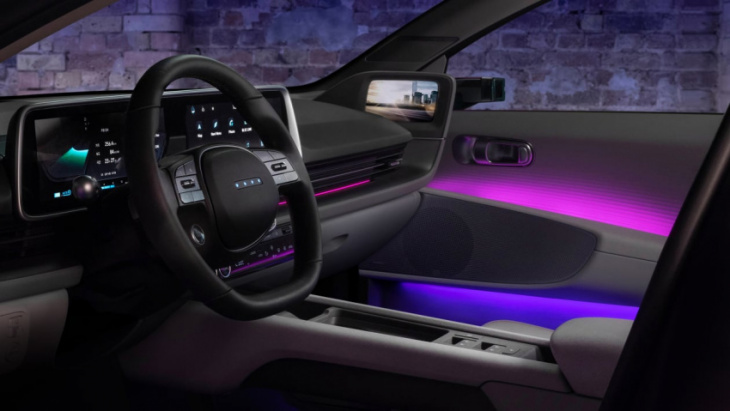 Inside, the Ioniq 6 shares some elements with the Ioniq 5, such as the steering wheel and some of the switchgear, but it’s a more cocooning cabin with a larger centre console that stretches up to the dashboard. It’s a more conventional look, but still features a pair of 12-inch screens – with one functioning as a touchscreen and the other sitting behind the steering wheel as a set of digital dials.

Eco-friendly materials are used inside, including the upholstery that is made from recycled plastics and the fibres from fishing nets on Premium trim cars – Ultimate trim boasts luxurious leather. At the sides of the wide dashboard are the screens that display the view from the door mirror cameras, and the door panels feature bold ambient lighting with the choice of 64 colours and six themes. This brightness of the interior illumination for front occupants can also be set to adjust based on the car’s speed. 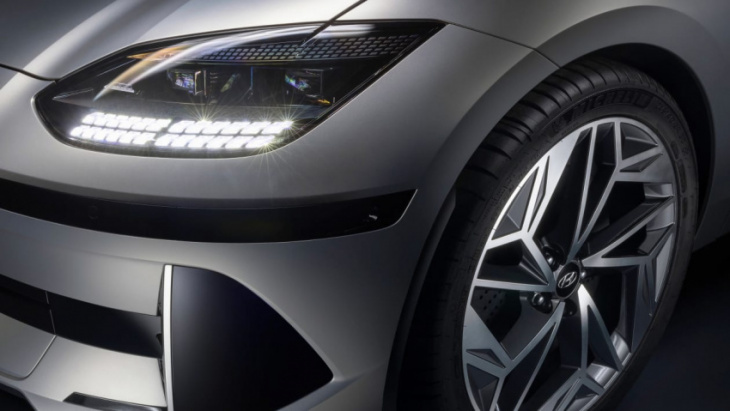 Topping the Ioniq 6 lineup is a dual-electric motor model that produces 321bhp and gets from 0-62mph in around five seconds. The entry-level, rear-wheel-drive single motor variant is likely to be the most popular in the UK; this produces 225bhp and manages the sprint to 62mph in just under seven-and-a-half seconds.

At launch, the Hyundai Ioniq 6 is only available with the larger 77.4kWh battery – a smaller and cheaper 53kWh version is coming at a later date. The larger unit can theoretically provide a range of up to 379 miles, though launch models have slightly less range due to their large 20-inch alloys. Hyundai claims the single-motor model should be able to do 338 miles on a charge, while the more-powerful dual-motor car can do slightly less at 322 miles.

Like the smaller Ioniq 5, all versions of Hyundai’s new electric saloon will come as standard with 350kW charging capability, allowing for a 10-80% top up in under 20 minutes when connected to a compatible fast charger. A free one-year subscription to the IONITY Premium package will be included for buyers to access the high-speed charging network.

Keyword: Hyundai Ioniq 6 is now on sale and cheaper than a Tesla Model 3