Significant changes coming to the exterior and interior. 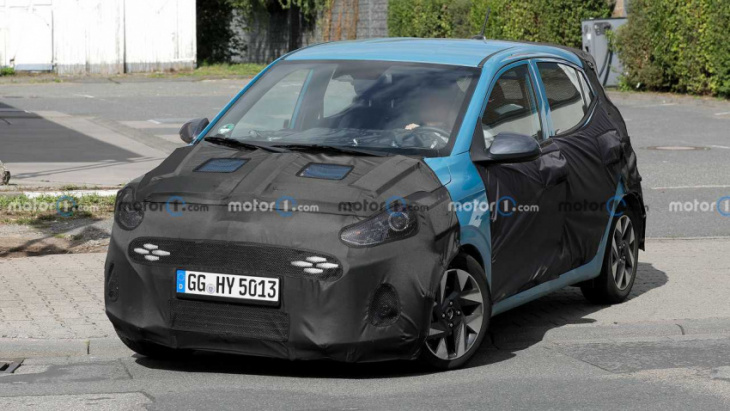 The Hyundai i10 has been on sale since 2019 in markets such as India, Vietnam, Mexico, South Africa, and most importantly, Europe. The third generation of the model is a funky-looking city car but it’s starting to show its age and the South Korean manufacturer is planning to give it a refresh. We have the first spy shots showing the updated i10 spied during tests on public roads in Germany.

Surprisingly, the prototype you see in the gallery below features a significant amount of disguise. However, it seems that there is a very good explanation for the camouflage – the i10 appears to be wearing a completely redesigned front fascia with many changes over the outgoing model. These include new daytime running lights incorporated into the grille that looks very much inspired by the Tucson and other new models from the automaker.

It’s difficult to tell whether the headlights will be modified but judging by these early shots, it appears that their shape won’t be changed. The overall shape of the bumper will likely continue without new touches, though there could be modifications to the area surrounding the fog lamps. The amount of camouflage is also huge at the back but we don’t think there are major visible tweaks in the rear.

It’s also worth noting that the dashboard of the refreshed i10 was also disguised. Hyundai’s test driver was quick enough to cover up the remaining part of the dash, hinting at a potential new layout for the entire cabin. Nothing can be confirmed at this point, though.

The third-generation i10 is offered in various different versions depending on the market. What you see in the gallery above is the European specification of the small hatch, which has been designed, developed, and built on the Old continent. There, the city car is currently available with a turbocharged three-cylinder engine, as well as a naturally aspirated four-cylinder mill. We expect the lineup to carry over without significant changes.

Keyword: Hyundai i10 Facelift Spied With Heavy Camo In Germany