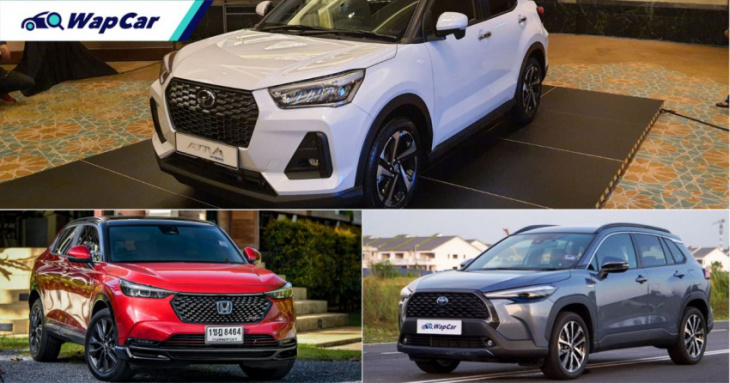 Hybrid cars are not new to Malaysians, seeing that they have been available in Malaysia for roughly 15 years with the introduction of the FD-generation Honda Civic Hybrid.

And today, hybrids are even more popular, as manufacturers like Honda, Toyota, and Nissan all offer at least one hybrid model in their line-up here in Malaysia. More recently, Perodua has thrown their hat in the ring with the 2022 Perodua Ativa Hybrid.

On one of the presentation slides that Perodua showed, the second national carmaker stated that the Ativa Hybrid is a series hybrid model, different from parallel and series-parallel hybrids.

But what separates a series hybrid from a parallel hybrid and a series-parallel hybrid? Let’s dive deeper by taking a look at popular hybrid technologies.

Compared to other hybrid solutions, mild-hybrids are the cheapest to manufacture due to their simplicity and smaller battery capacity, but the trade-off is lower performance and improvements in fuel efficiency isn’t that great. 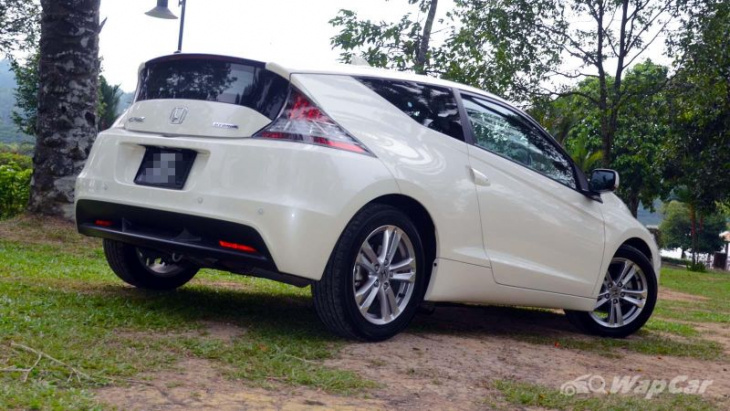 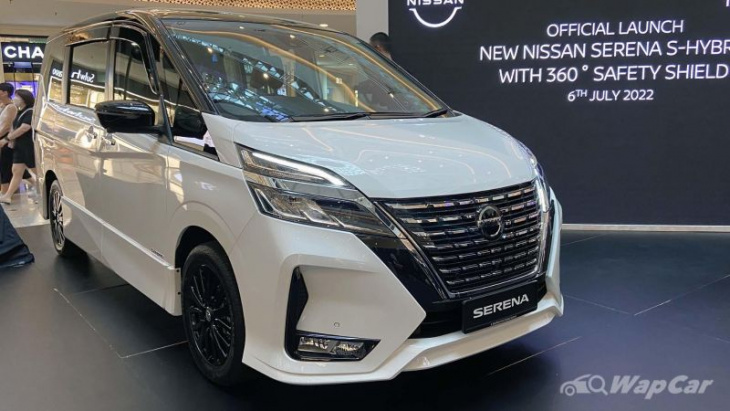 What about the Nissan Serena S-Hybrid then? That’s not a real hybrid, not even a mild-hybrid, as there is no motor to assist / drive the wheels, only an upgraded engine starter motor and a secondary 12V battery for better engine start-stop performance. 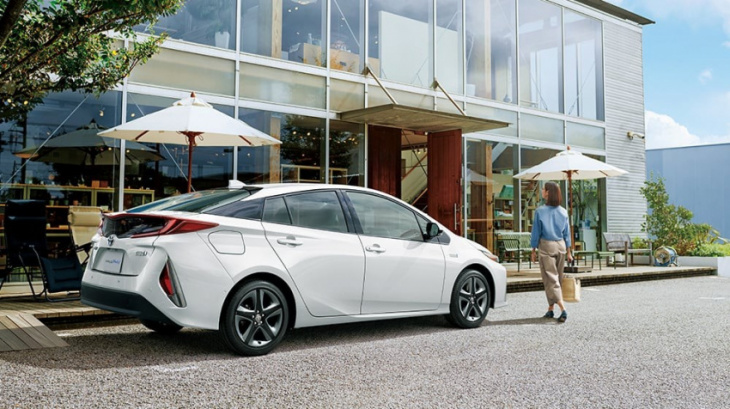 The not-sold-in-Malaysia, 4th gen Toyota Prius is available as a regular HEV or PHEV

But that’s not all – full-hybrid vehicles are split into three distinctive types: Series hybrid, parallel hybrid, and series-parallel hybrid. 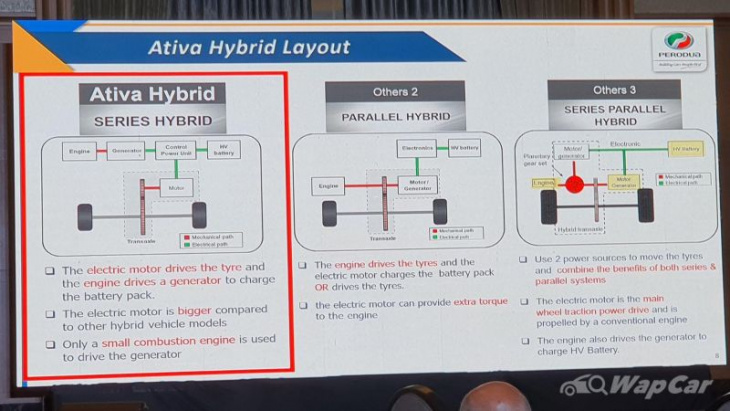 Think of series hybrids as EVs with its own power generator under the hood. Series hybrids typically feature a petrol engine, but unlike other hybrid systems out there, the petrol engine’s sole duty is to charge the battery. 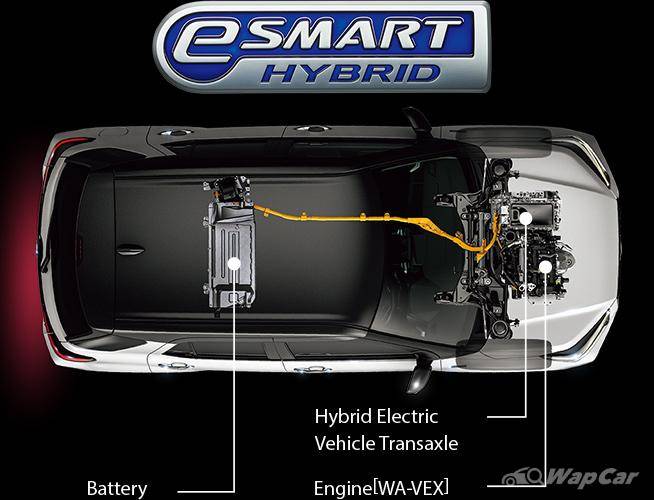 Cars with a series hybrid system include the Perodua Ativa Hybrid and Nissan’s e-Power range of models (Serena, X-Trail, Note). 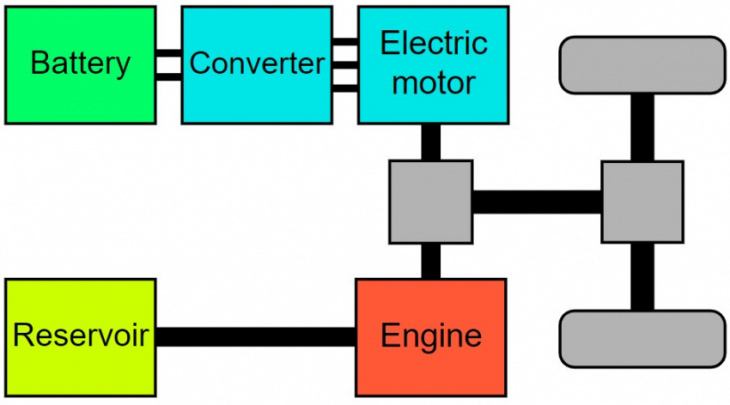 In a parallel hybrid system, there are two paths of power turning the wheels, hence the term parallel. Both the engine and electric motor can drive the car individually, or simultaneously. 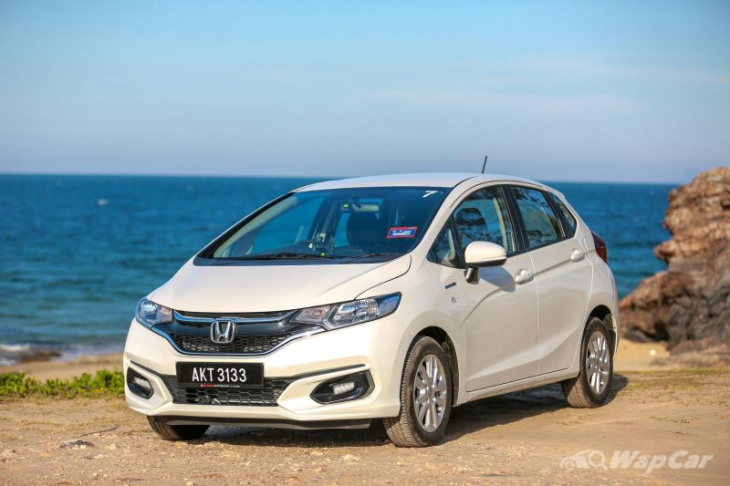 Examples of cars with a parallel hybrid system include Honda’s i-DCD range (City, Jazz, HR-V), as well as all German marques like BMW. BMW’s range of PHEVs are functionally parallel hybrids, as such the aforementioned BMW models belong in this category. 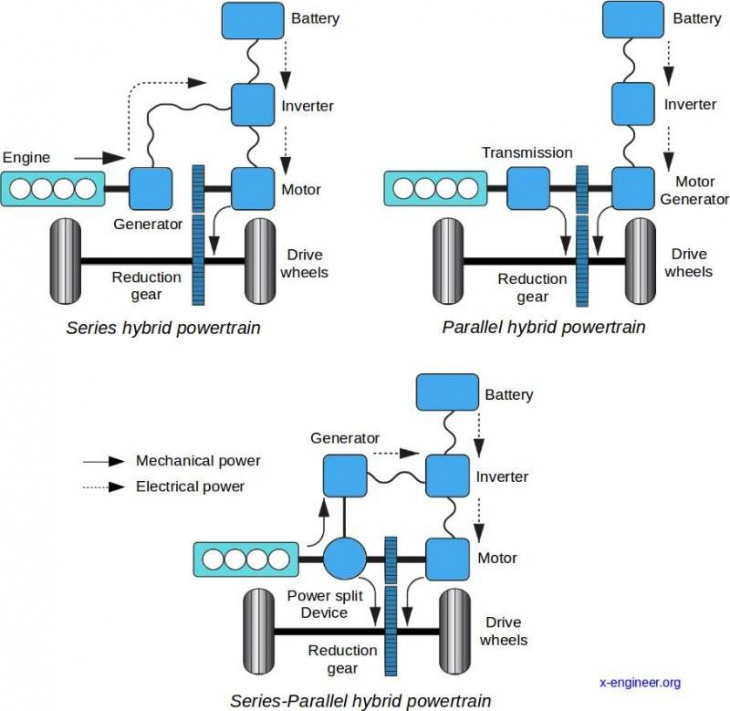 A series-parallel hybrid is the most advanced (and also most expensive) of non-plugged in electrified vehicles. It combines the benefits of a series and parallel hybrid system into one. 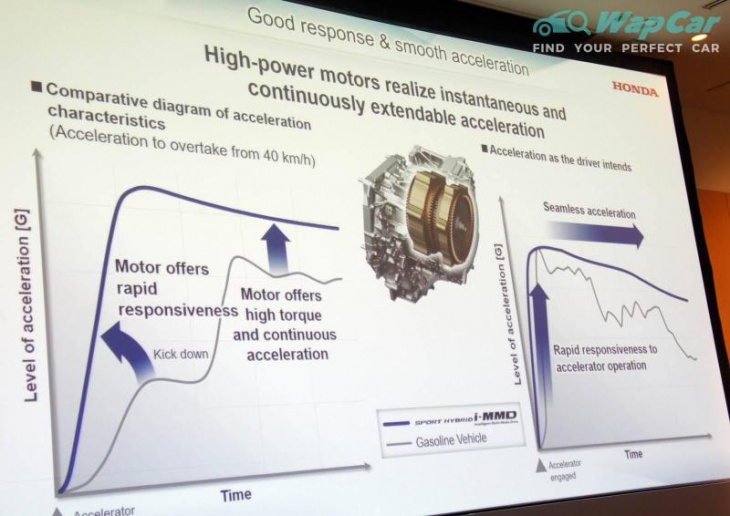 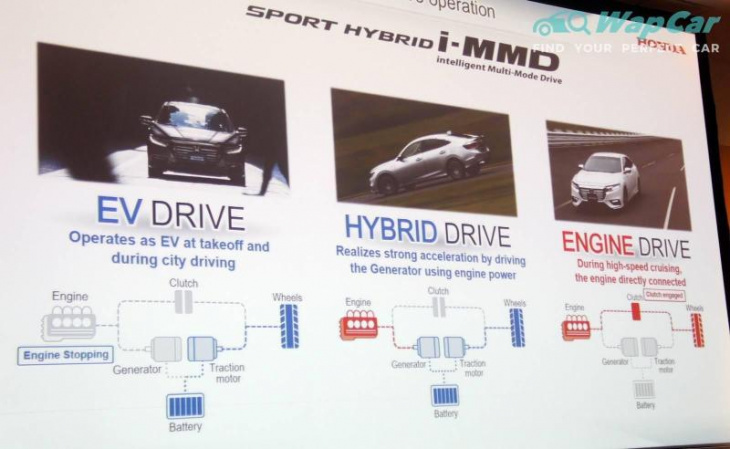 In a series-parallel hybrid, there are 2 electric motors. Cheaper series / parallel hybrids have only 1 motor. With only one motor, the system can either drive the car, or recharge the batteries, but not at the same time. With two motors, it can, thus allowing it to operate either as a series hybrid or a parallel hybrid. 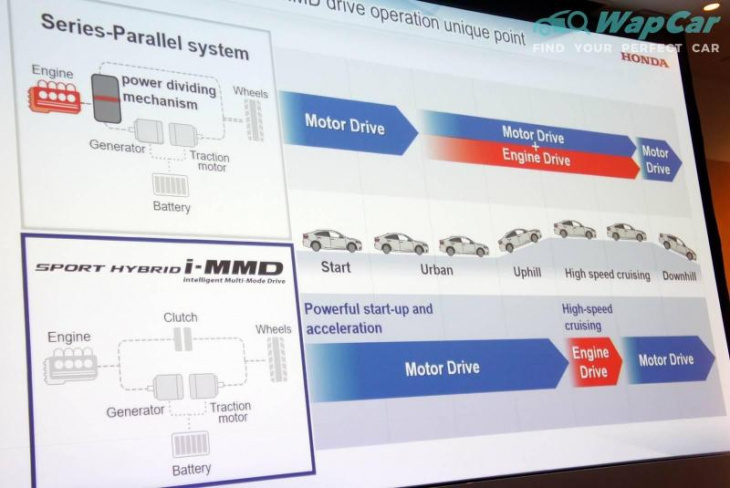 Honda’s e:HEV (or i-MMD) will run in series mode (electric motor or engine driving the wheels) longer than Toyota. 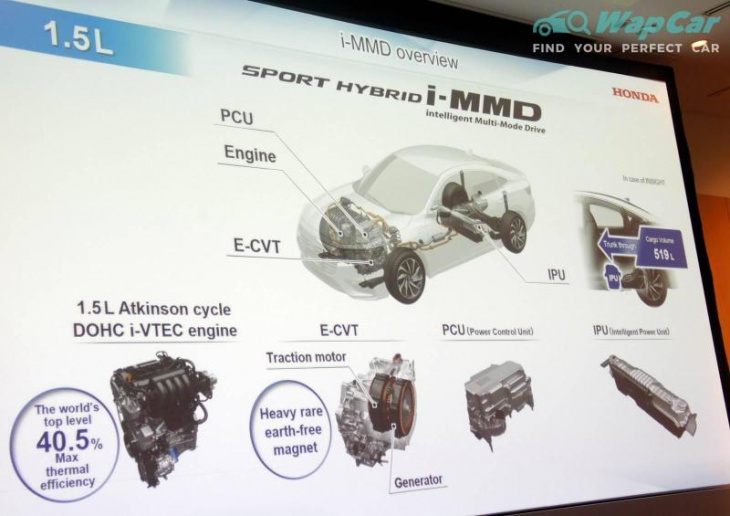 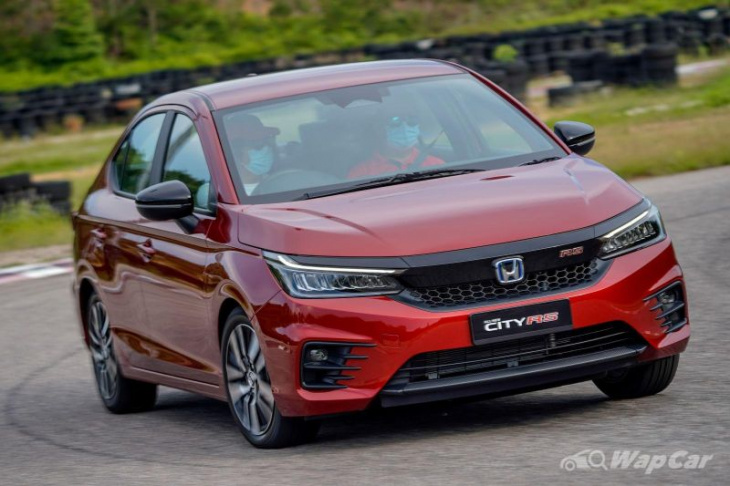 With the exception of a series hybrid (ETCM does not sell any e-Power cars here and the Ativa Hybrid is only for leasing), practically every other hybrid system can be found in cars sold here in Malaysia.

What about plug-in hybrids (PHEVs) then? 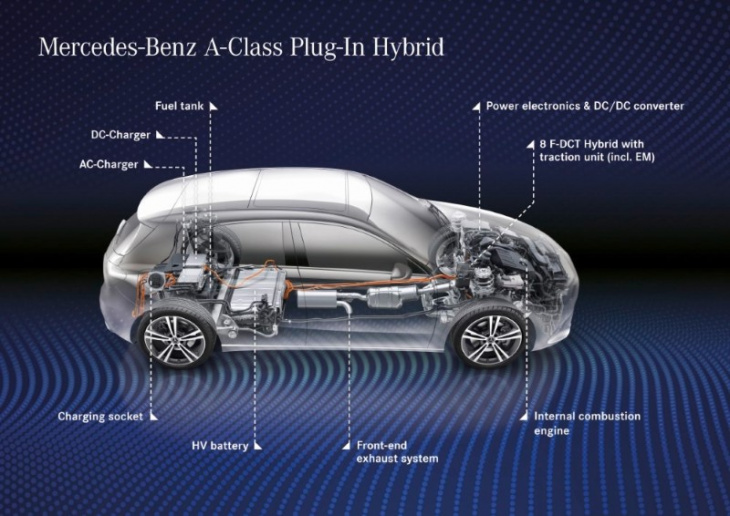 Almost all PHEVs are parallel hybrids, with a motor nestled inside a modified automatic transmission.

A plug-in hybrid (PHEV) is a hybrid vehicle that features a charging socket that can be used to charge the battery pack. Seeing that plug-in hybrids’ battery capacity (typically around or more than the 20 kWh mark) is second only to a full battery electric vehicle (BEV), PHEVs can travel purely on electric power alone, with a range of up to 100 km (model dependent). 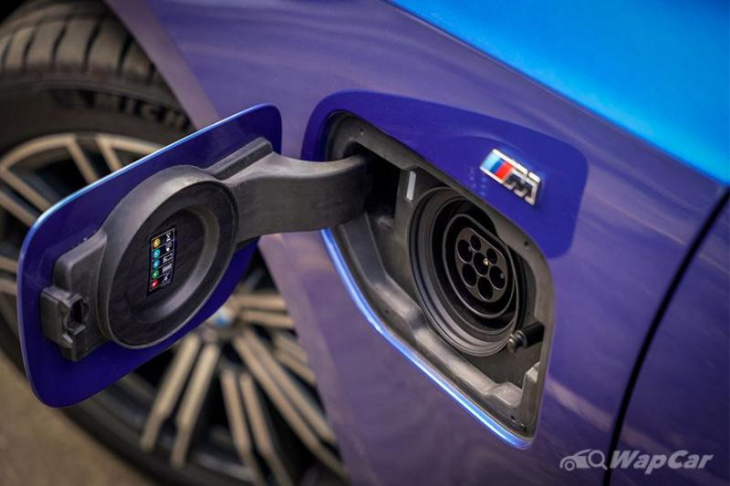 PHEVs are very expensive, due to the larger battery so it is typically represented by premium cars. Models include the BMW 330e, BMW 530e, BMW 740Le, BMW X3, and BMW X5. Volvo also offers PHEVs (branded as Recharge T8) in Malaysia, such as the Volvo S60, Volvo V60, Volvo XC60, and Volvo XC90.

Question is, seeing that fuel subsidies will be removed next year, will your next car purchase be a hybrid?

Keyword: Hybrid 101: Demystifying MHEV, HEV, PHEV, and understanding whether Toyota, Honda, or Perodua hybrids are best for you

1. 2023 Honda Ridgeline Sport base model is too expensive 2. Standard engine and all-wheel drive 3. Ridgeline RTL: More value at a slightly higher price The 2023 Honda Ridgeline’s interior is its best feature Buying a new midsize truck can be a challenging task. It’s one of the ...


View more: 3 Reasons to Avoid the 2023 Honda Ridgeline Base Model

2023 Honda Winner X Sports Underbone Commuter Launched In Vietnam Its sporty colorway draws inspiration from the Honda CBR1000RR-R Fireblade SP. In Asian countries like Vietnam, Malaysia, and the Philippines, underbone motorcycles are incredibly popular thanks to their versatility. In essence, these commuter machines combine the practicality of scooters ...