After Rivian Automotive (NASDAQ: RIVN) struck a deal with Mercedes-Benz last week for a strategic partnership and joint production effort of electric delivery vans, analysts are explaining how the move could help bolster the EV maker’s long-term outlook.

Last week, Rivian and Mercedes-Benz announced they would build all-electric delivery vans for the European market, where the EV company has yet to deliver a vehicle. In the United States, Rivian is currently offering customers the R1T pickup, but its EDV, or Electric Delivery Van, is one of the main focal points of the company’s early production.

In 2019, Rivian found itself a worthy investor and supporter in Amazon, which ordered 100,000 EDV units from the company. Deliveries began this year after extensive pilot programs yielded adequate data for a controlled launch in several cities. The EDV is an early signal of success for Rivian as it struggles to ramp production of the R1T and R1S due to parts shortages. Supply chain issues have been cited by Rivian in the past for delayed production and delivery dates.

However, the EDV’s arrival in Europe and Rivian’s partnership with Mercedes-Benz is bolstering the company’s long-term future, which has been not in doubt but definitely questioned by those with extensive knowledge of the industry. While armchair commentators have speculated that Rivian and other EV startups would not survive the early days of production, Tesla CEO Elon Musk advised the automaker to cut costs and ramp production at its first factory before expanding with new manufacturing facilities within the United States.

The EDV partnership with Mercedes gives Rivian a new bit life, according to numerous analysts. The electric van sector, while predominately controlled by Ford, is still widely up for grabs due to relatively low volumes. While the United States may have a higher concentration of these vehicles, Europe is still lacking sustainable commercial logistics solutions, and Rivian’s EDV product is suitable for the market, Dan Ives of Wedbush explained (via MarketWatch):

“We view this as a smart strategic move by Rivian to penetrate Europe while ramping production of the EDV platform to meet its long-term growth and profitability targets. We believe Rivian is primed to capture the massive influx of current and future EV demand, capitalizing on a unique global TAM from a core engineering and design perspective along with the Amazon commercial relationship has the potential to be a major EV stalwart over the next decade. Production is improving to at least hit the 25k deliveries this year and we have confidence that customer reservations continue to increase into FY23 with the stage set for a seminal year ahead.”

Ives has a $45 price target on Rivian and an ‘Outperform’ rating on the stock. 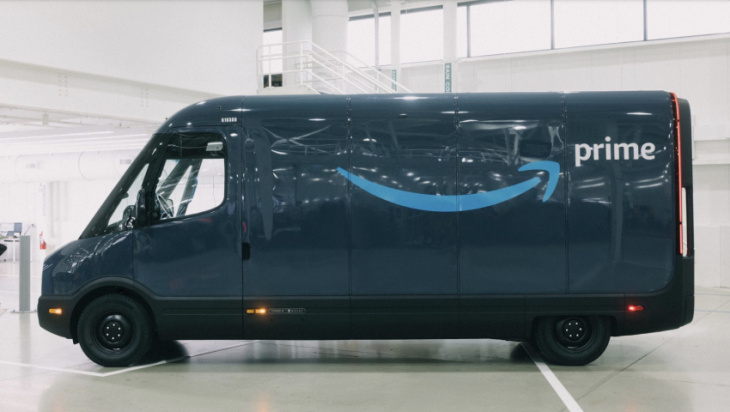 Additionally, Ben Kallo of Baird Securities has also said the Rivian deal will help the company solve scalability with the production portion of the deal occurring at an existing Mercedes-Benz facility in Europe. Kallo also said that Rivian has a chance to “mount a challenge to Tesla’s current dominance” in the coming years as it continues to address its total scalable market through strategic partnerships like this one:

“With few details disclosed regarding the proposed partnership, the total addressable market for electric vans is still vague. Despite a lack of clarity, RIVN is set to benefit from Mercedes’ scale while lending from its strong technology position. As the world accelerates its shift to EVs, Rivian has a solid opportunity to mount a challenge to Tesla’s current dominance.”

Kallo and Biard hold a $51 price target with an ‘Outperform’ rating on the stock. At the time of writing, shares were down just 1.6 percent on the day, but have surged over 14.5 percent since the partnership was announced last week.

Disclosure: Joey Klender is not a RIVN shareholder.


View more: For private and business customers: Launch for Vans in the Mercedes-Benz Online Store

The Mercedes-AMG Formula 1 team switched from diesel to biofuel How far did the Mercedes-AMG PETRONAS F1 team travel to test this out? The Mercedes F1 team uses more fuel on the road than at the race Formula 1 has been pushing for greener solutions to the travel-heavy sport. ...


View more: Rivian shows off R1T and EDV service vehicles capable of handling 80% of all repairs

How much ground clearance does a Rivian R1T offer? The Ram 2500 Power Wagon offers 14.2 inches of ground clearance The Rivian R1T is revolutionizing truck performance Traction control and off-road driver aid software comes in handy in certain 4×4 situations. But on some trails, there is no replacement ...


View more: The Rivian R1T Offers More Ground Clearance Than Any Other Truck