How Much Should You Pay for a Pre-Owned Toyota Tundra?

While the Toyota Tundra is exceptionally popular, this truck doesn’t get redesigned often. Toyota has three generations of the Tundra pickup truck starting in 2000 with a minor redesign around 2014. How much can you expect to pay for a pre-owned Toyota Tundra? The price ranges are listed below by generation.

A first-generation pre-owned Toyota Tundra is under $10,000 (hopefully) 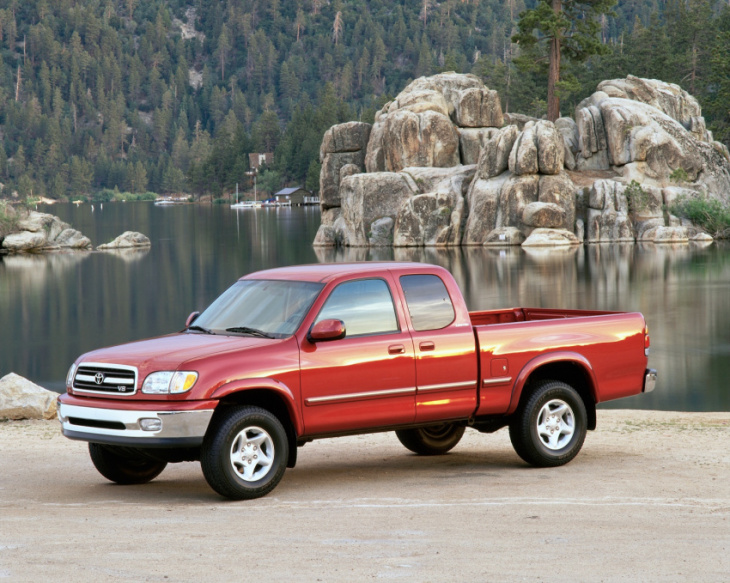 The Toyota Tundra has been on the market since 2000, which leaves more than 20 years to choose from. Unlike most vehicles on the market, it has only gone through three major redesigns, with the most recent being the 2022 Toyota Tundra. The first-generation Tundra ran from 2000 through 2006.

Edmunds has the list price estimate for a first-generation pre-owned Toyota Tundra from $3,245 to $5,530. It says the full-size 2000 truck was made more for the “general consumer than commercial use.” It offered a powerful V8 and the quality Toyota trucks are known for.

The final year of this first gen pre-owned Tundra was 2006. Edmunds has an estimated list price of $6,062 to $9,375. Toyota equipped the 2006 truck with the same smooth V8 engine and Toyota quality. It didn’t change much between the first year and now, but it didn’t need to. The maximum towing capacity was 7,100 pounds.

The second-generation pre-owned Tundra can go upwards of $30,000

From 2007 until 2013, the second-generation Toyota Tundra graced the streets. This version was a bit larger and offered more cab and bed customizations. A 5.7L V8 helped power the pickup truck but was only one of the three available engine choices. People are big fans of this generation because these pre-owned Toyota Tundra pickup trucks seemed to last forever.

The 2014 refreshed Tundra still has a high price

Miguel Cortina explores if the new 2021 Toyota Tundra has enough features and capability to gain an edge over the competition in this Buyer’s Guide. Learn more about the 2021 Toyota Tundra TRD right here. ➡️ https://t.co/xL4CGNuzz8 pic.twitter.com/Oyc3mKFa49

In 2014, the second generation Tundra received a refresh. Edmunds estimates the pre-owned Toyota Tundra price range will start at $26,990 for this version. Since the Toyota truck didn’t receive another update until 2022, the 2021 version isn’t exactly cheap.

After the refresh, Toyota continued to offer many configurations but didn’t keep up with rivals. People love the reliability of the pre-owned Tundra, but it isn’t the most capable truck around. For the same price, other trucks have higher tow ratings and better fuel economy.

The 2021 Toyota Tundra was the final year before the redesign. Toyota offered the Trd Pro version, which was more capable than previous years. It still lagged behind similar trucks, but some buyers appreciate the Toyota’s reliability. Either way, you can expect to pay $50,000 or more for this version.

Used car prices have slowly slowed, but prices for a pre-owned Toyota Tundra remain high. Reliability is a major factor for buyers, and Toyota tends to deliver on that.

Keyword: How Much Should You Pay for a Pre-Owned Toyota Tundra?