How Formula 1 Said Goodbye to Sebastian Vettel at Abu Dhabi

Notebook leftovers and observations from the final F1 race of the 2022 season. 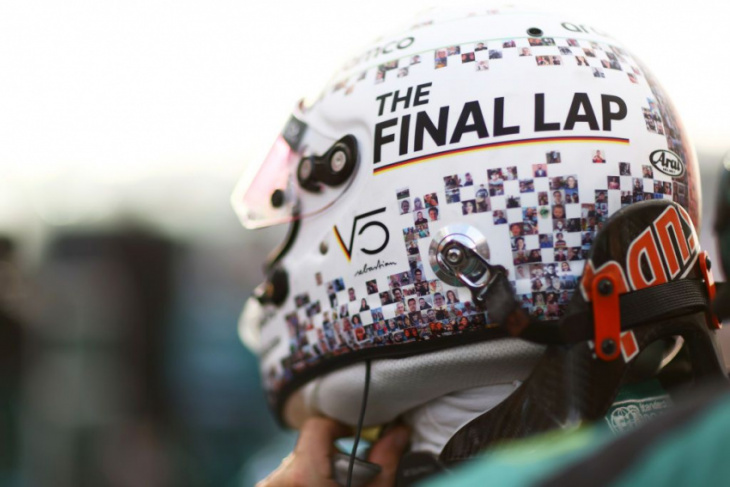 Formula 1’s 2022 season came to a close in Abu Dhabi and off-track there were some emotional farewells, and paddock gatherings, as everyone went their separate ways for the winter.

Here’s a look at what was left in the notebook after the F1 Abu Dhabi Grand Prix weekend: 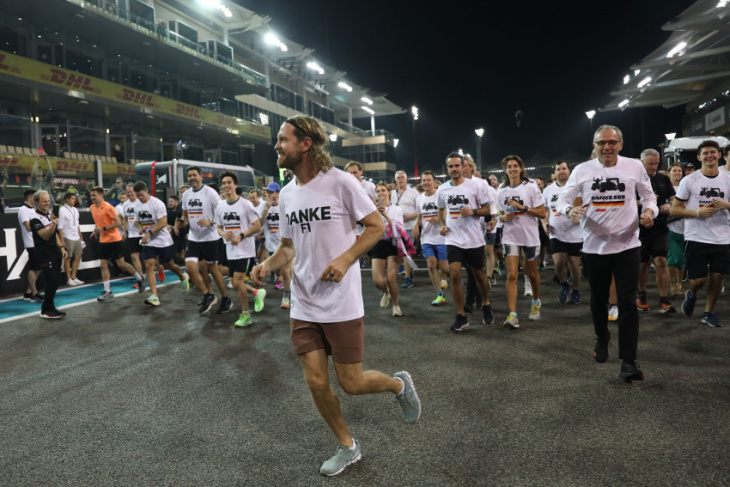 Sebastian Vettel ran circles around the competition at Abu Dhabi.

Retiring four-time F1 champion Sebastian Vettel organized a unique way of saying goodbye to the F1 paddock. He invited everyone to join him on track, a couple of hours after qualifying, for a group run.

Several hundred people from various sectors of the paddock—teams, broadcasters, media—gathered and were issued “Danke Seb” T-shirts, while Vettel himself wore a T-shirt that read “Danke F1.”

“Thank you Formula 1 for all these years, and thank you to all the people in the paddock,” said Vettel as he addressed attendees. “We travel the whole year together—I thought it was just a nice idea to invite everyone.”

Vettel was joined at the start by F1 CEO Stefano Domenicali, former Ferrari teammate Charles Leclerc, and close friend Mick Schumacher, before leading away the paddock on a night time jog of a very warm Yas Marina Circuit.

A flatbed truck also circulated—for those who didn’t run—with the entertainment onboard provided by a very jovial Norbert Vettel, Seb’s father, who plugged his music into the circuit PA to encourage the runners. At the end, Vettel remained at the finish line for a prolonged period, thanking those for attending, and graciously posing for a litany of photos.

The turnout, and the universal respect shown, was a true mark of Vettel as a champion and more pertinently, as a person. Danke Seb.

Drivers Go Out for Dinner… on Hamilton’s Tab

One of the many events to take place through the weekend in honor of the retiring Sebastian Vettel was a dinner for the drivers.

Organized by Lewis Hamilton, who reportedly took care of the bill, all 20 drivers headed to a restaurant in Abu Dhabi to say farewell to the four-time world champion, enjoying the privacy of a separate part of the restaurant—and there was even a bathroom private from the other guests.

The field of 2022 then posed for a group photo outside—an impressive feat to gather everyone considering busy schedules.

Minor changes to the regulations for 2023 are still under discussion. 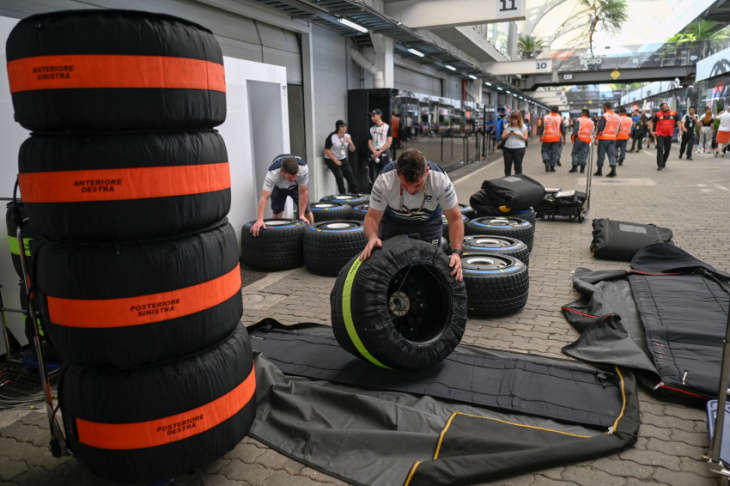 Formula 1 plans to eliminate tire blankets as soon as 2024.

The Drag Reduction System is set to be activated after one racing lap during Sprint races, rather than after two laps, in a bid to help keep the field closer and encouraging racing.

Power unit penalties may also be modified, as it was agreed by the F1 Commission that the current structure is not a strong enough deterrent, meaning teams are more inclined to stockpile, undermining the attempt at reducing costs.

Elsewhere, F1 still intends to ban tire blankets in 2024, but further discussions will be held and no final decision will be made until at least mid-2023.

The FIA is also starting evaluations regarding “a package of parts” in order to try and reduce spray during wet weather conditions, amid complaints from drivers that this has been exacerbated by the new generation of cars, causing interrupted or delayed sessions in the rain.

Alpine has been hosting a karting championship for media throughout the 2022 season, using Formula 1 points, and the four-event series came to a close in Abu Dhabi.

There was some frantic racing among the 28-strong grid at the Yas Kartzone, a series of first-corner collisions, and more than a few contentious decisions. Ultimately it was GT racer and Viaplay TV presenter Stephane Kox who emerged as the 2022 champion, taking the trophy and the prize of a test day building up to driving Alpine’s 2012-spec Lotus E20 Formula 1 car.

The FIA has introduced a new prize for each grand prix winner: a medal.

From now on each Formula 1 winner will be presented with the usual trophy plus an FIA Medal. In a statement, the governing body outlined that “while the event trophies are retained by the team, or replicas provided to the drivers, this medal has been created so that each Grand Prix winner retains a unique personal memento to commemorate their outstanding achievement.”

Max Verstappen was the first recipient after triumphing in Abu Dhabi and he was handed his medal by FIA President Mohammed Ben Sulayem. 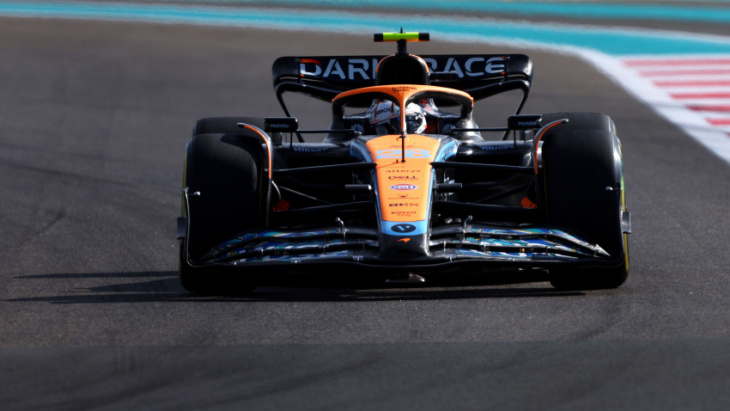 IndyCar race winner Pato O’Ward made his Grand Prix weekend debut in Abu Dhabi as he participated in FP1 with McLaren.

O’Ward had his first try of F1 machinery at last year’s young driver test and also sampled its 2021-spec MCL35M during private running earlier in the fall. At Yas Marina he got behind the wheel of the MCL36 for the opening one-hour session. He outlined that he still has long-term aspirations to race in Formula 1.

“I’m already in IndyCar now and I feel like I’ve established myself as one of the title contenders every single year,” he said. “I love IndyCar racing—it’s some of the best racing in the world, if not the best in terms of how competitive it is. But I grew up watching Formula 1 and I grew up with the F1 dream as many other drivers around the world, and that’s what kind of opened my love to so many other categories. So I’m still very keen to make the switch to Formula 1.”

There was also an FP1 debut down at Aston Martin, where this year’s F2 champion Felipe Drugovich had his first public outing for the team, ahead of his 2023 reserve driver role. 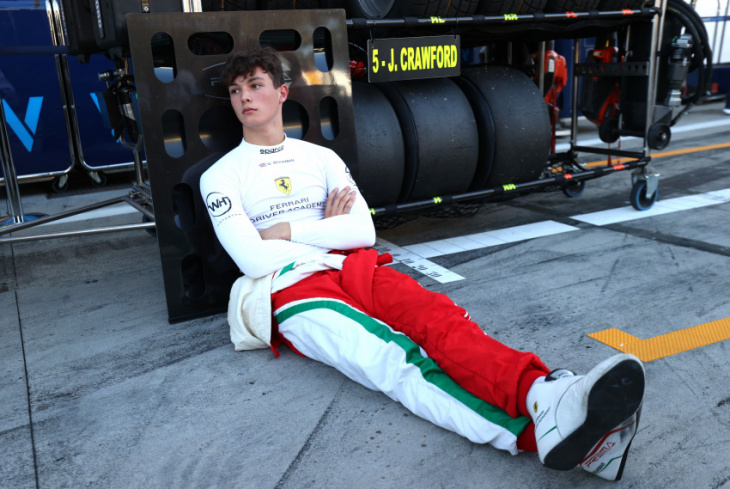 F1’s next big thing might just be 17-year-old Oliver Bearman.

The lineup for the next batch of youngsters keen to succeed Drugovich is already taking shape.

The main interest lies down at Prema, which has recruited Ferrari-backed Briton Oliver Bearman, who is only 17. Bearman, a champion in Formula 4, finished third in this year’s Formula 3 series in his rookie campaign.

Bearman will link up alongside Mercedes protégé Frederik Vesti, while over at DAMS it will field Ferrari junior Arthur Leclerc, the younger brother of Ferrari Formula 1 racer Charles.