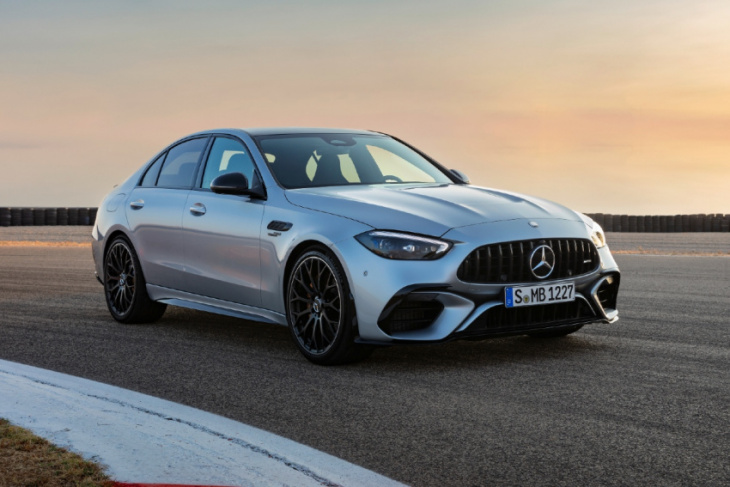 Mercedes-AMG has dropped its beloved twin-turbo V8 from the all-new C63 sports sedan and wagon, but in its place comes a Formula 1-inspired hybrid powertrain with the world’s most powerful four-cylinder engine.

While the news was not a surprise, the official reveal of the new C63 S E Performance and its specifications still stun. The powertrain consists of a 2.0-litre four-cylinder turbocharged petrol engine that makes a whopping 350kW of power on its own, but it’s backed up by an electric motor that boosts total system output to 500kW and a staggering 1020Nm of torque.

In comparison the out-going V8 managed 375kW and 700Nm from its 4.0-litre twin-turbo V8, so it seems Mercedes has found a replacement for displacement after all.

Another major change for this new model is – to handle all this extra grunt – Mercedes has introduced its 4Matic all-wheel drive system. But fans of hanging the tail out don’t need to worry, because Mercedes has also introduced a ‘Drift Mode’ to the C63 for the first time.

Philipp Schiemer, chairman of the board of management of Mercedes-AMG, said this new model ushers in a new era for the famous performance house.

“With the C63 S E Performance, we are opening a new chapter in the history of our brand,” Schiemer explained. “Even 55 years after our company was founded, we at AMG continue to show the boldness and the will to realise the creative, to deliver something special. The new C63 in particular is a real game changer. With its revolutionary concept, it brings a completely new approach to the segment, which until now has been primarily characterised by the promise purely of performance. With a maximum system output of 680hp, we do indeed keep this promise. But the intelligent P3 hybrid concept offers much more. I am sure that with this technology, which incorporates a lot of know-how from Formula 1, we will also appeal to a new group of customers.” 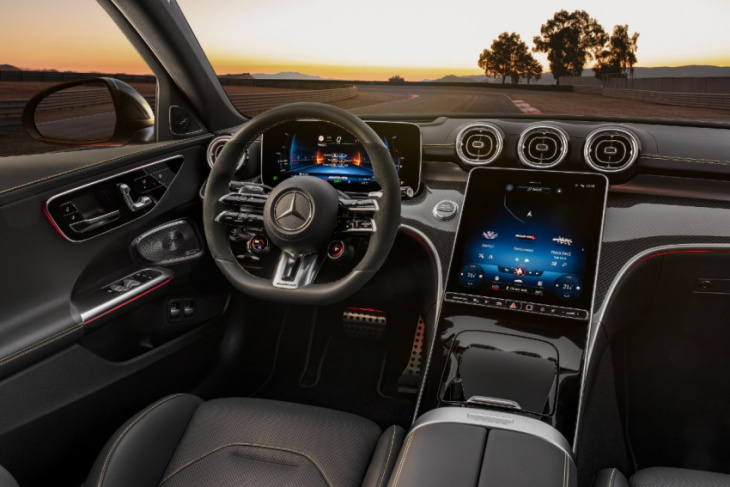 The stats on this new model make some impressive reading – 0-100km/h comes in just 3.4 seconds and it has a limited top speed of 250km/h, with the option to bump that to 280km/h.

Perhaps more impressive though, is that thanks to it being a hybrid, this incredibly powerful four-cylinder returns a fuel economy figure of just 6.9-litres per 100km. Not that you should think of the C63 as an ‘eco warrior’ because with a relatively small 6.1kWh battery it only has 13km of range on electric power.

The design of the battery and electric motors has come from the brand’s championship-winning F1 team, with the focus of development on producing power quickly and repeatedly but only for a limited time.

“With its Performance hybrid drive and electrically assisted exhaust turbocharger, the new C63 S E Performance is a technological masterpiece that takes a new approach,” said AMG technical officer, Jochen Hermann. “The electrified powertrain offers a whole new driving experience. The immediate response of the electric drive at the rear axle, the rapid torque build-up as well as the fast power output and also draw of our battery are very special features. Add to this the standard-fit rear axle steering and the fully variable all-wheel drive with Drift Mode – the new C 63 once again illustrates the high level of technical expertise that AMG possesses.”

AMG’s latest creation is due to arrive in Australia by the middle of 2023, with both the sedan and wagon launching at the same time, with pricing and specifications for the local market set to be confirmed closer to that time.