How Does Using Windshield Wipers Affect an EV’s Driving Range?

Driving ranges of an EV average around 300 to 400 miles these days. Of course, the actual figure depends on many items, such as what electrical components are used and how long those items are running. One question that comes to mind when thinking about the battery’s range, especially on a rainy day, is how much energy do the windshield wipers use, and do they affect the driving range?

Electric vehicles use up a fair amount of energy, but it’s spread amongst several pieces of equipment, not just the motors that make the car run. It includes headlights, an HVAC system, radio, wipers, infotainment display screens, and power steering motors, to name just a few. How much energy each piece uses is figured out using a mathematical formula.

The total consumption equates to kilowatt hours per 100 miles. Each electric car will state its energy efficiency figure and a kWh/100 miles energy usage estimate. So, for example, the Tesla Model 3 averages 23.7 kWh/100 miles throughout its whole electrical system for one hour of use.

According to Just Energy’s website, 1 kW is 1,000 Watts of power. So, a kilowatt hour is 1,000 watts of energy used in one hour. To determine how much energy a part consumes, you use the formula Watts x hours. Then divide that number by 1,000. For example, a piece of equipment that runs on 25 Watts would equate to .03 kWh.

So, how much energy will the windshield wipers use?

How much energy do windshield wipers use on electric cars? 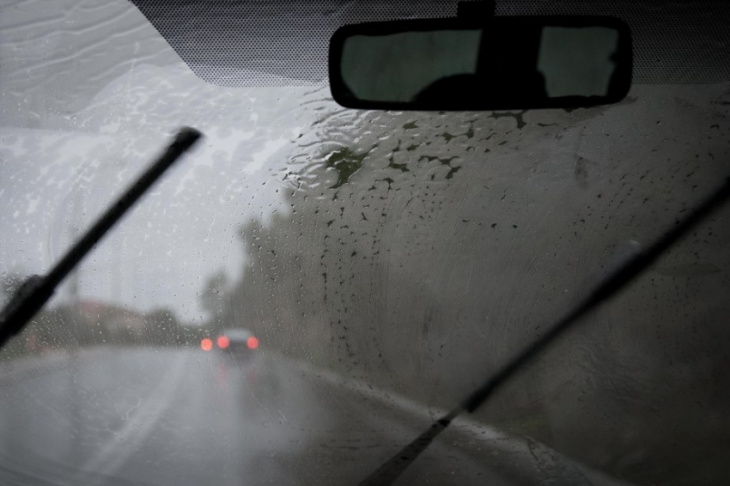 According to an Electrical Engineering Stack Exchange user, a wiper motor is unlikely to produce more than 50 Watts of power. Most of these wiper blades would run on much less than that, though. If we calculate kWh from the 50 Watt figure, you will get .05 kWh. This figure is a drop in the bucket in comparison. The accessories that would use the most energy besides the powertrain are the heating/cooling systems. This is because several components are working within the heating/cooling unit.

So, to power all these, you would use around 3-4 kilowatts per hour. That amounts to 5.16 miles taken off the battery’s driving range. For windshield wipers, it calculates to about the same as the USB ports, according to Wired. That means if you shut off the wipers, you would only save a mere .006 miles, which isn’t much.

You’re better off keeping the wipers on, especially if it’s raining or snowing. Shutting off the heater/air conditioning might garner more driving range.

What else factors into the energy consumption of an EV’s driving range?

Looking for #EVtires that are great in the rain ?️ ? Meet the ‘ONE.’ The Nokian ONE tire delivers exceptional durability with fibres found in bulletproof vests + extra strength and grip ideal for EV’s & more!
Meet ‘The ONE’: https://t.co/IncS33zLLM#hybridtires #TalkToKal #EVs pic.twitter.com/m1RuPmcvEm

Some electric vehicle owners report a significant drop in the EV range when using their wipers. Why would that be? According to Tesla Motor Club forum users, a few factors contribute to extra energy consumption.

One is the severity of the rain on any given day. While light rainy conditions aren’t likely to show much difference, moderate to heavy storms would cause the wipers to run for more extended periods and at a faster pace, depending on how heavy the rain is pelting the windshield.

Some owners feel the extra energy comes from cooler temperatures and resistance on the road. Experts recommend that you plug in the EV before you drive away to preheat the battery. This will require less energy to heat the vehicle than if you started with a cold battery. Or you could keep the heater off and just use your heated seats if you have them.

Resistance occurs when driving through puddles and saturated pavement. Avoiding standing water helps, but it can’t always be done.

Windshield wiper motors don’t use much energy when it rains. If you’re looking to extend your driving range, you might want to look into saving some energy with your heating/cooling systems instead.