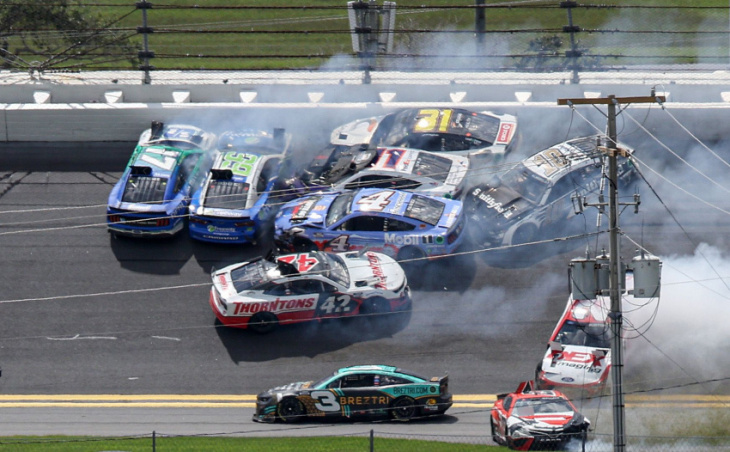 Then, after apparently winning the race under caution in the early afternoon, the Richard Childress Racing driver was in the field. Well, sort of in, that is.

Much later, after waiting out a 3-plus hour rain delay, Dillon was briefly out of the Playoffs again. Daytona 500 winner Austin Cindric led most of the last 16 laps and looked capable of winning the afternoon’s “second race” to knock Dillon to the sidelines.

But in a “all’s well that ends well” drama, Dillon passed Cindric with three laps remaining to win the 160-lap, 400-mile full-distance race that (finally! whew!) put him in the Playoffs that begin next weekend at Darlington (S.C.) Raceway.

Dillon’s fourth career victory inadvertently brought Ryan Blaney into the Playoffs with him. Blaney and Martin Truex Jr. went into the race winless, but high enough in regular-season points to be the only drivers eligible for the Playoffs based on points.

Team owner Richard Childress—his grandfather—suggested Dillon wait until the last lap to make his move on Cindric. Dillon, worried that a late caution might cost him—decided to go a bit earlier. “There was a lot going on there,” Dillon said. “I knew if we got to the white (one-to-go flag), I was afraid somebody would wreck behind us. I wanted to go ahead and get the lead. If I could, the 2 (Cindric) would not be able to hold onto the draft. We’ve done it in practice enough to know you’ll lose the tail and it’s hard to get it back. 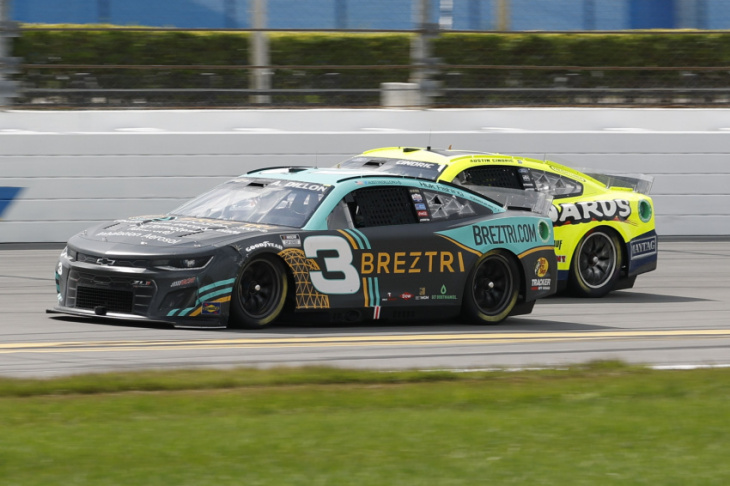 Austin Dillon won his first race of the season at the right time and qualifies for the NASCAR Cup Playoffs.

“I had a big run and had my teammate (Tyler Reddick), back there (drafting, but not challenging). I knew we were in good shape there to the end. He did a good job checking up any kind of run. Just a little too much push there (on Cindric) and got him loose.”

In all fairness, Dillon’s victory may have kept NASCAR from taking undeserved heat. He took the lead with a slick move seconds before the last caution when rain created mayhem at lap 138. Anticipating better weather late in the day, officials optimistically waited longer than usual. (After a couple of hours of rain, few would have complained if NASCAR had called it much sooner).

As it was, the regular-season finale was almost exactly what many Cup Series-insiders expected: a wild and crazy afternoon when aggressive driving was the rule and not the exception.

With more than a dozen “outsiders” scrapping for two Playoff spots, the prevailing attitude was, why hold anything back now? And so nobody did.

The result was five major incidents that sidelined or damaged 30 of the 37 starters, some of them multiple times. 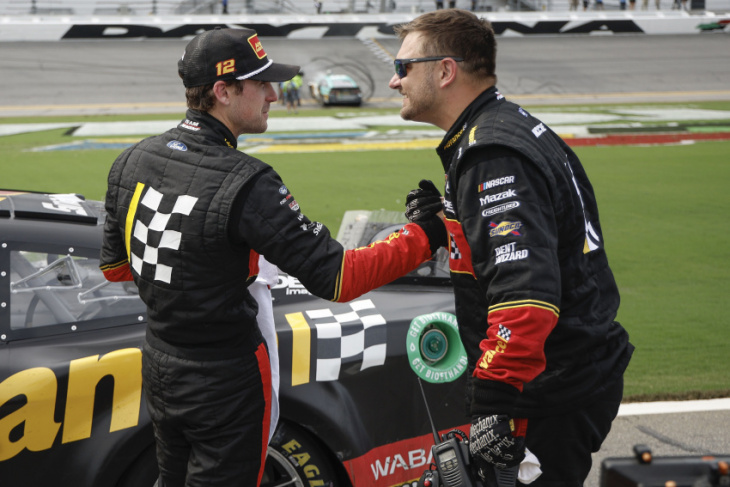 Ryan Blaney, left, is congratulated after sneaking into the 16th and final NASCAR Cup Playoff spot.

For the time being, as it turned out.

Those two began the 10 a.m. race the only drivers eligible to advance on points. If the winner had been among the 14 drivers already eligible (Kurt Busch excused himself, opening a spot), Blaney and Truex Jr. would have moved forward as the last two championship hopefuls.

Dillon led two times for 10 laps. He was running mid-pack toward the end of the original race, when rain in Turns 1-2 created mayhem. Leader Denny Hamlin slipped first, and turned directly into the wall. The rest of the jammed-up field piled into each other, blocking all three lanes. With few options, Dillon picked the right one. He went for the flat apron and drove past the wreckage on his right as the caution waved.

Much later, Hamlin placed the blame squarely on NASCAR for being slow to display the caution. “I ran into the rain in the middle of Turn 1 and lost it,” he said. “We had rain down the frontstretch, so it was raining about 10 seconds before we got into Turn 1. I’m sure the fans felt it, then they watched us all pile in there.

“I’m just shook mostly. The hit was massive; my first one in this Next Gen car and it was legit. I made the right moves at the right time and got in the lead at the right time. But it was also a bad time because we were the first ones to get to the rain.”

When asked what NASCAR could do to prevent similar accidents, the three-time Daytona 500 winner had a simple answer: “All we can do is better officiating.”

Among the handful of Playoff scenarios, a new winner was among the least expected. A repeat winner would move Blaney and Truex Jr. forward based on points. Few “experts” entertained the possibility that a new 2022 winner would make the Playoffs and thus eliminate Blaney or Truex Jr.