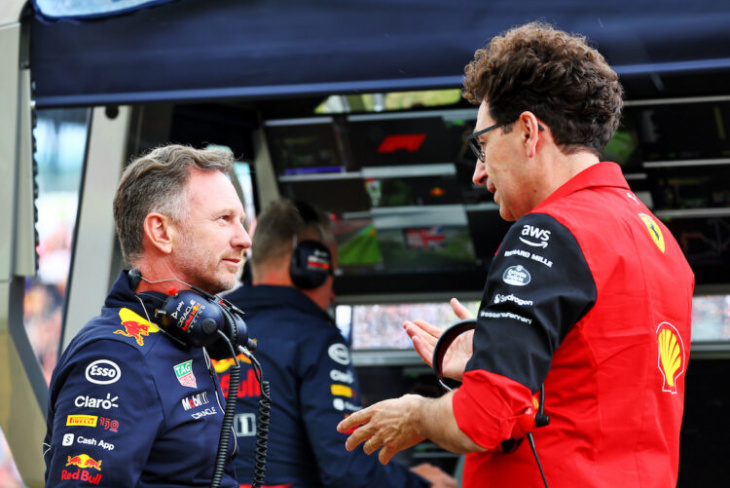 Following the season-ending Abu Dhabi Grand Prix last month, Ferrari announced that Binotto would leave the team at the end of the year.

Binotto has held the Team Principal role at the Italian squad since 2019, having worked as an engineer for over two decades prior to his promotion to the helm of the outfit.

Ferrari began the 2022 campaign on a strong foot, winning two of the first three races.

However, its title hopes were derailed by strategy blunders, on-track errors and reliability woes.

Speaking to Sky Sports, Horner says that he was “not really” surprised when the news regarding Binotto broke.

“It is obviously Ferrari’s choice,” he added. “I think it will be the sixth Team Principal I have sat opposite since I’ve been at Red Bull.

“Obviously difficult for him. They had a great car this year, they were very competitive.”

Horner denies that he is interested in the Ferrari role, having led the Red Bull F1 squad since its formation in 2005.

“My commitment is very much with the Red Bull team. I’ve been there since the beginning and have a very close attachment.”

Mercedes, with whom it shared an intense rivalry with in 2021, failed to produce a competitive car and was forced to settle for third in the standings at the end of the season.

However, Horner has backed the team to return to form in 2023.

“I think both those guys had great seasons,” he said, referring to Mercedes team-mates George Russell and Lewis Hamilton.

“George finishing ahead of Lewis in his first year with the team was an impressive performance but Lewis is obviously still right there.

“You’ve got to assume they’re going to come back fighting hard next year, Ferrari as well will be looking to make progress.

“So it’s set to be a really tough season next year.”