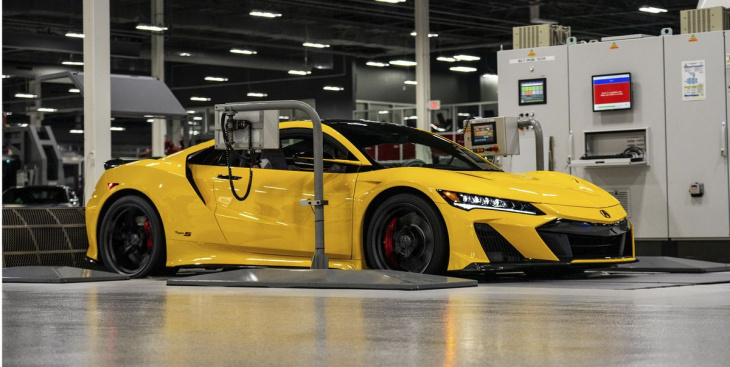 Now that the specialty factory is done building the NSX supercar, it can pivot to another low-volume experimental product.

Honda announced a hydrogen-fueled, plug-in SUV based on the new CR-V on Wednesday. The new vehicle will be the first plug-in hybrid to use hydrogen, and, due to its low-volume nature, will be built at Honda’s Performance Manufacturing Center in Marysville, Ohio.

If that name sounds familiar, it’s because that’s where Acura built the second-generation NSX. The specialty facility was designed for Honda’s low-volume offerings that are tough to build on conventional lines. The NSX, with its all-aluminum structure and small sales volumes, was the first. Since then, the plant has also made special “PMC Edition” versions of the Acura MDX, TLX, and RDX, with option combinations not available on standard-production-line cars. Now that the NSX is gone, it’ll build the country’s first fuel-cell plug-in hybrid.

Conceptually, it’s exactly what it sounds like. The CR-V-based vehicle will have a lithium-ion battery that can be charged at home, with enough range for daily commuting or short trips. For longer trips, it has a range extender, similar to a current plug-in hybrid. Except, instead of a gasoline engine, the CR-V-like SUV will use a compressed-hydrogen-powered fuel cell.

Honda is likely hoping that the ability to charge at home will help skeptical early adopters make the plunge into the immature hydrogen vehicle market. Hydrogen cars to date have been hamstrung by the extraordinarily limited fueling network. Because traditional hydrogen cars cannot run without the rare fuel, they’re essentially unusable in broad swaths of the country. Sure, public charging infrastructure is also limited, but EV early adopters leaned on home charging, creating demand for public charging that is being filled out by private companies and governments.

With this fuel-cell vehicle, Honda is likely hoping for a similar trajectory. Getting more hydrogen cars on the road will incentivize companies to build more filling stations, which are costly to build and operate. Regardless, this will be the first hydrogen car capable of sustained operation outside of California, where all current U.S. hydrogen stations are.

Don’t be surprised if the first one outside of California opens in Ohio, as we’d imagine Honda will want to show off the PMC’s flagship in the place where it’s built. It certainly liked showing people the NSX. And though the two products are quite different, this isn’t the first time Honda has used the same facility to build NSXs and then, later, hydrogen cars. The Tochigi, Japan facility that built the original NSX also built the FCX Clarity, Honda’s first fuel-cell vehicle. That factory also built the first S2000 and, given rumors of a Honda EV sports car, we’re hoping that history repeats.