Wrapped in a replica of the Morecambe Missile's 100th TT start livery from 2022, each bike also comes with a meet-and-greet. 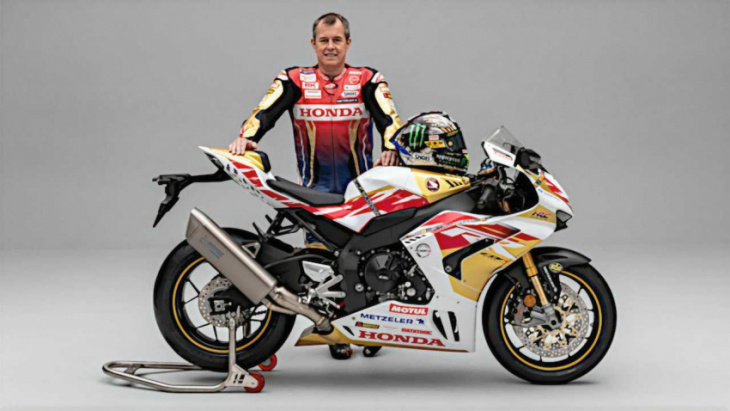 The 2022 Isle of Man TT marked an extremely special occasion for road racing legend John McGuinness, MBE. It’s the year that he hit an impressive milestone of 100 TT starts—in addition, of course, to celebrating his 50th birthday. Not a bad way to celebrate, we think. That Honda Racing would eventually pay tribute to his 100 TT starts with a special livery was a pretty foregone conclusion—and sure enough, the team did not disappoint.

It’s now November, 2022, and this year’s IOMTT is firmly in the rearview mirror, but the NEC Motorcycle Live show in Birmingham is just around the corner. It will be held from November 19 through 27, for motorcycle enthusiasts from all over the U.K. to get a good look at the latest and greatest machines on two wheels, up close and personal. It’s fitting, then, that this event is where Honda U.K. plans to unveil its special, limited-edition John McGuinness 100th TT Start Race Replica Honda Fireblade SP.

Limited to just 30 bikes to be sold worldwide, Honda based this bike on the top-spec 30th Anniversary CBR1000RR-R SP, and of course it bears matching livery to what McGuinness ran at the 2022 IOMTT. The airbox cover is autographed by McPint himself, and it also comes with an individually-numbered plaque on the headstock.

Proud new owners of the John McGuinness limited edition Fireblade SP will also receive some additional goodies, including a Fireblade garage mat, a Honda indoor dust cover, and a special 3D laser-engraved crystal with the image of the McGuinness replica Fireblade SP. Best of all, new owners will also be invited to meet the man himself, John McGuinness, MBE, at Honda Racing headquarters for the official handover of their new machines.

As a reminder, the 30th Anniversary Fireblade SP comes with some pretty sweet performance upgrades that are sure to excite any rider who wants to take it to the track. The suspension consists of Öhlins Smart Electronic Control 43mm NPX front fork and a TT-36 rear monoshock. Brembo Stylema calipers and master cylinder ensure stopping power to match the might of this machine—and unsurprisingly, there’s a tidy Akrapovic exhaust system fitted, as well. The gold-striped alloy wheels come wrapped in a pair of Metzeler Racetec RR tires—with a pair of road tires supplied as well, just in case.