I’ve been keen to try our Jazz, again, since my first drive of it six months back. I remember not understanding the complexity of the hybrid petrol engine set-up, in that it’s kind of like a hybrid, kind of like an EV at times, but bottom line being it’s fuel efficient.

My Hamilton-Auckland-Hamilton daily 120km offers a good test of 95 per cent motorway, 50 per cent 110km/h, and typically, 30km of gridlock traffic, so it’s a good cross-section. 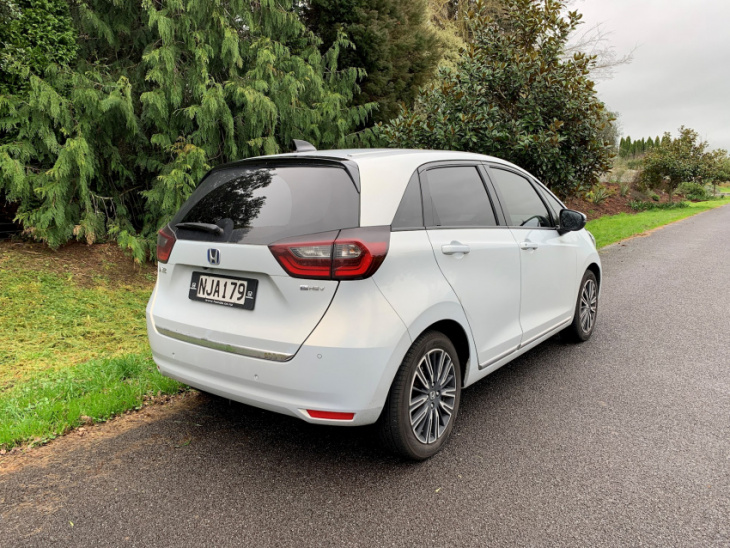 It certainly offers a good argument over small and efficiency over electric, but the thing about the Jazz is it might look small, but it feels big inside.

The low seating position and medium-SUV-sized rear seats offers plenty of space, that I filled with two kids seats. Then there’s the Magic Seat options, which I found most helpful when cleaning and finding rubbish, toys and other trinkets dropped by said kids.

Of course, the load space options for flat floor, rear seat bench lifting or folding the passenger seat back offer up lots of choices, along with a decent (for a car this size) boot, and a little underfloor cubby for stand-up items like shopping bags keen to spread their items across the boot floor.

The lack of vents for the rear seat could be problematic in summer, while up front there’s fantastic vision from the front quarter-windows and thin pillars.

There’s also the indispensable wireless CarPlay touchscreen that works well – as do the two USB ports/chargers – except for the irritating requirement to hit the OK/safety button on the infotainment screen every single time it’s started. That gets tedious, fast.

While the complexity of the engine set-up is best explained in a video, driving it results in odd times of the engine cutting in: but it’s quite calming and quiet to drive a few kilometres in EV mode, and even more satisfying to see the battery level indicator continually rising and falling with the nature of driving: downhill, it will quickly collect a few bars of battery, while cruising along, it will drain it in just a few km. It’s no PHEV or BEV, but there is an element of real driver interaction making a difference. 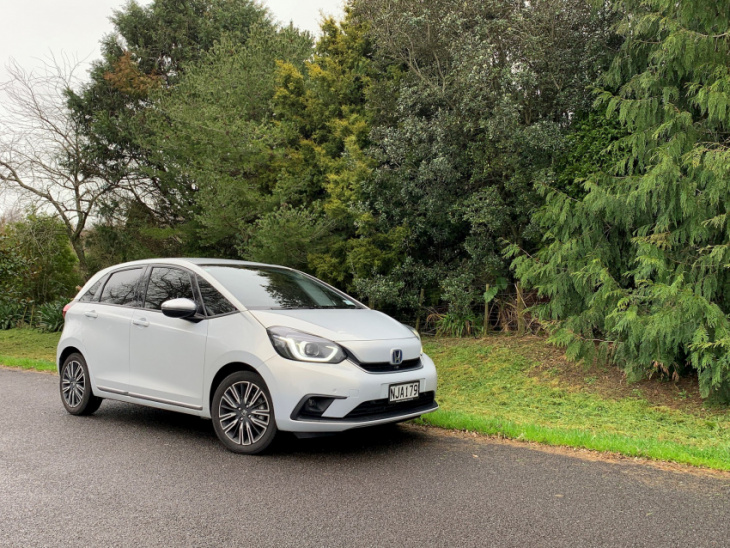 The reversing camera and front sensors help what is already a small car to park, and while the Premium Opal Pearl colour is often debated between grey and blue based on sunlight, it’s a bigger, better car than some condescending first impressions suggest.

Honda claims 3.8l/100km, which is achievable around the suburbs, but that’s not my biggest complaint. In stop-start, low-speed motorway traffic, the Adaptive Cruise Control is fantastic, and a great addition as part of the Honda Sensing Tech, but it turns itself off at 25km/h, and won’t allow reactivation until 30km/h – which is quite a high speed when stuck in traffic. It’s a first world problem, granted, but for me it’s a deal breaker in such regular heavy traffic. 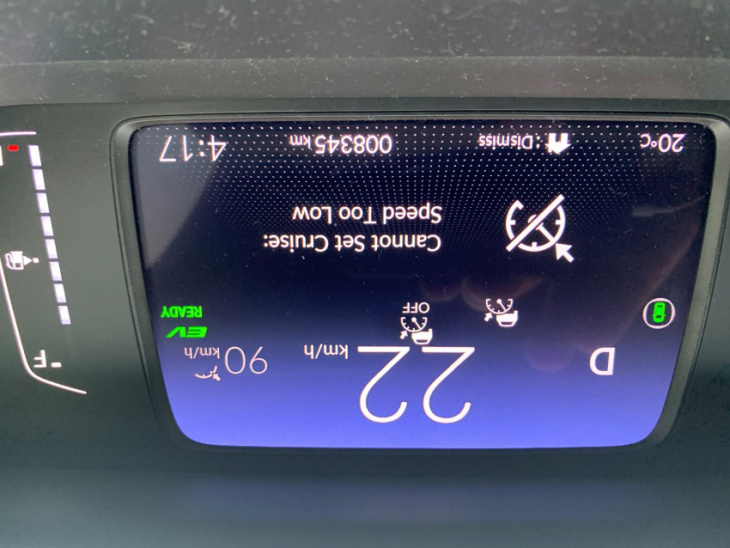 Otherwise, the Honda Jazz e:HEV has certainly grown on me, and has proven itself as a fantastic suburban gem, and a motorway muncher, while keeping 91 octane fuel bills to a minimum. Certainly helps explain why Jazz is selling so well, lately. 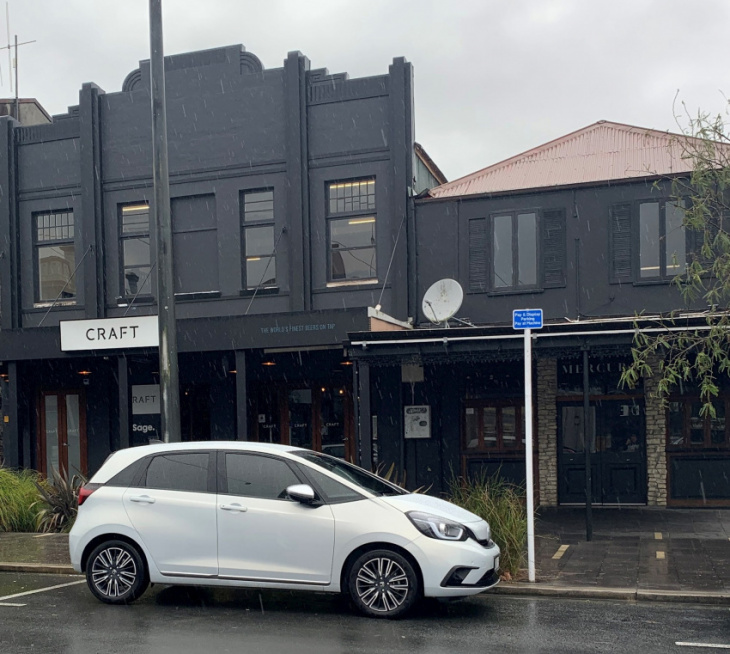 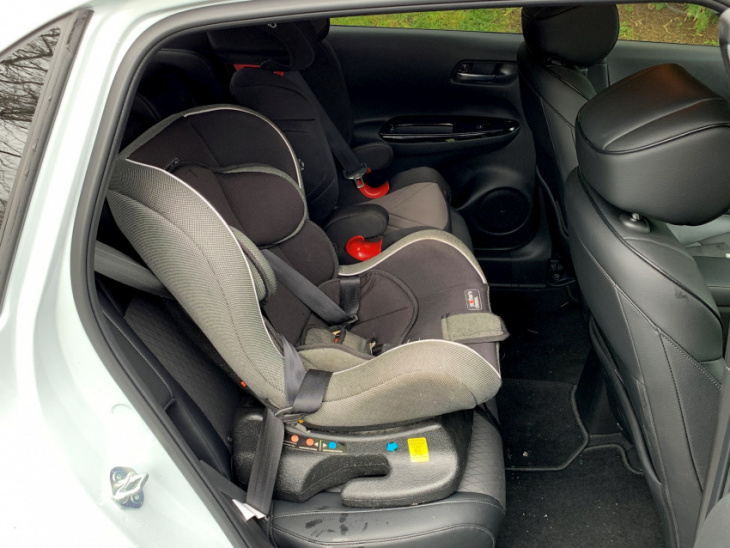 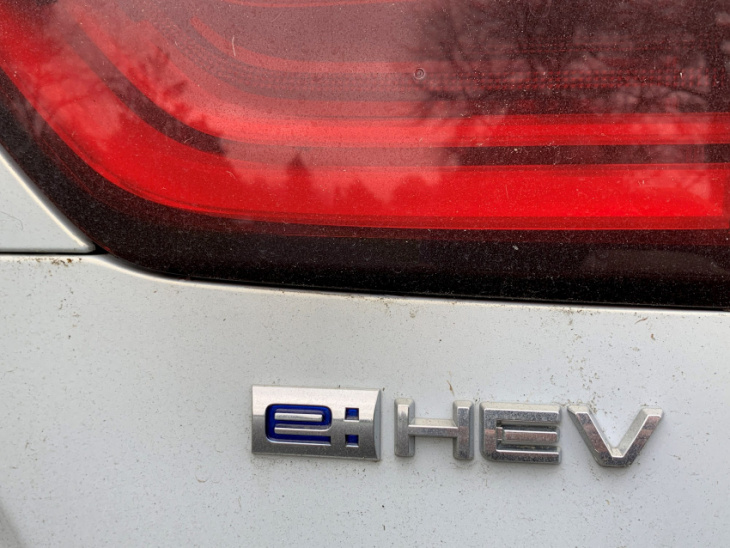 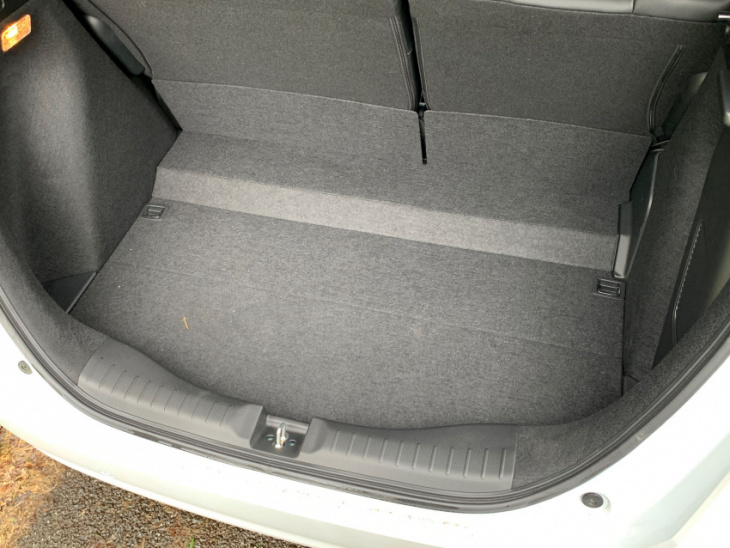 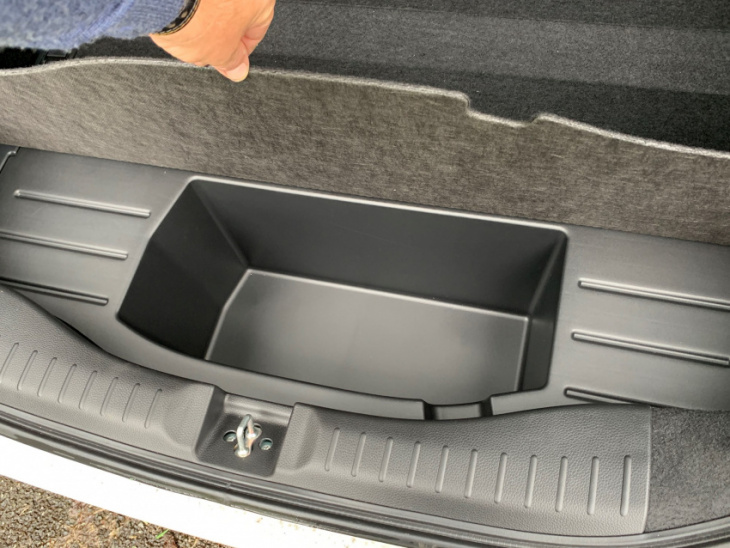 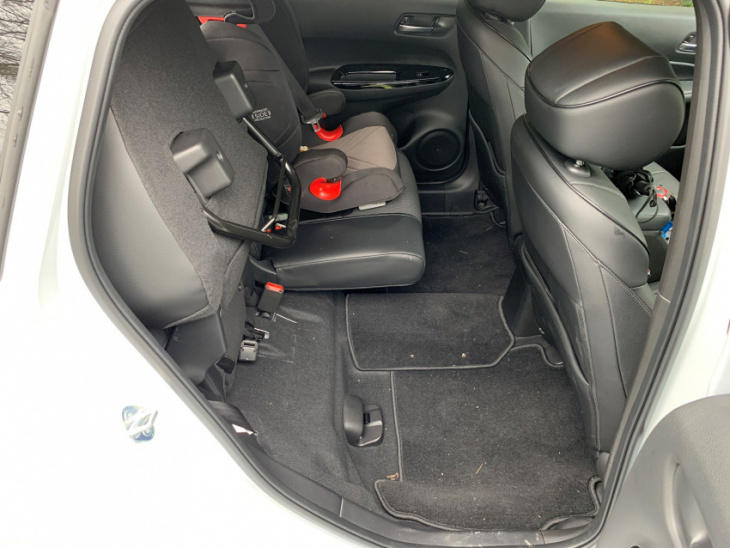 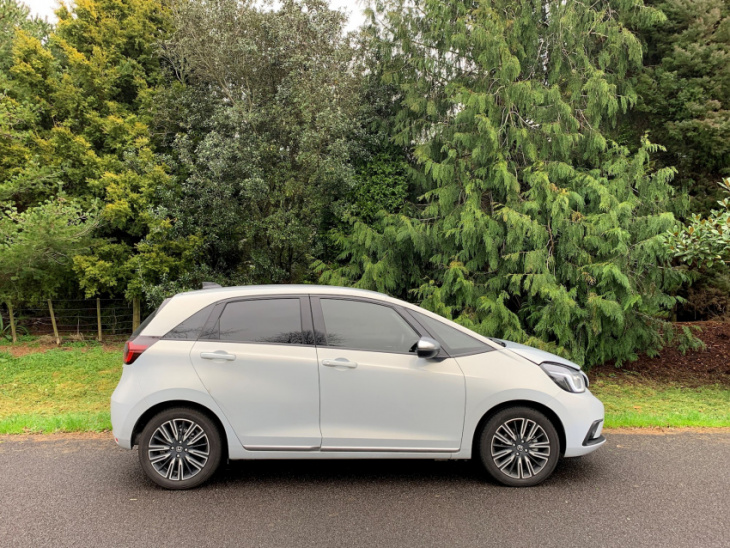 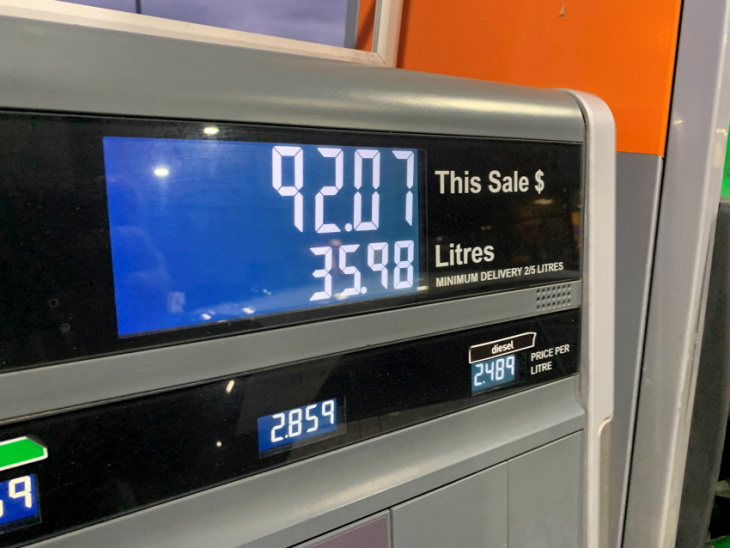 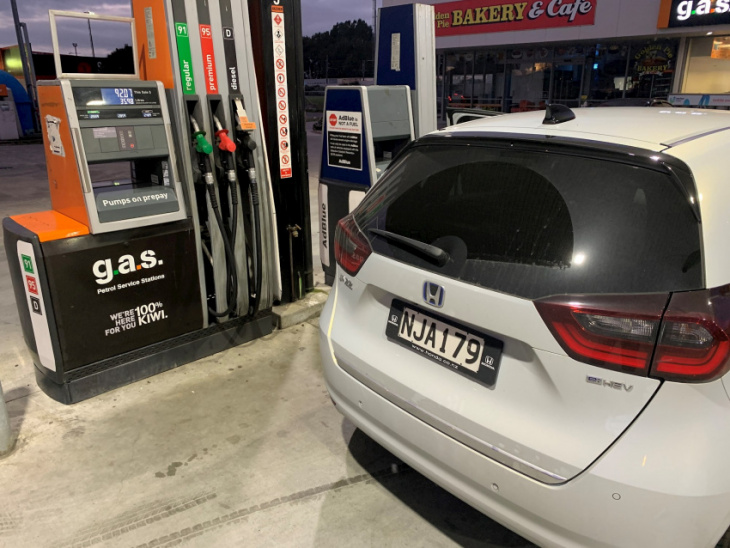 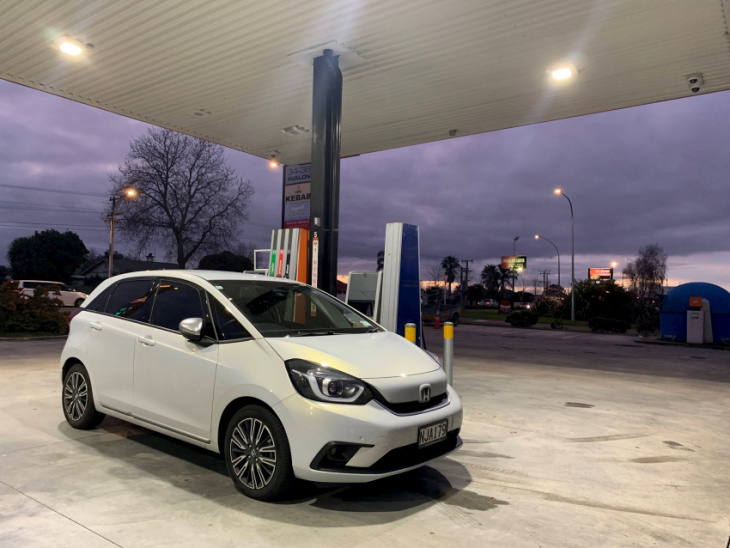