Will Big Red send the futuristic café racer to Europe and North America? 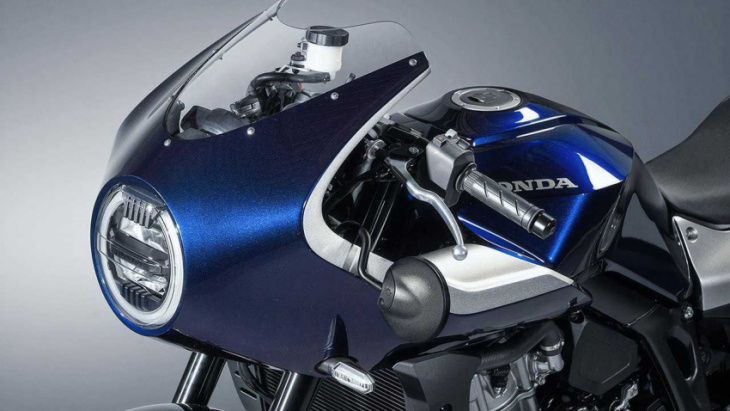 Let’s face it. We’re all champing at the bit for Honda to release the Hawk 11 already. We know the 1,082cc parallel twin’s power output (100 horsepower, 76.7 pound-feet of torque). We’re aware of the model’s Pearl Hawks Eye Blue and Graphite Black paint schemes. We’re even savvy to the fact that the Hawk will launch in Japan on September 29, 2022.

Knowing all those facts doesn’t make us any less impatient for the retro racer’s arrival, though. Honda is a merciful manufacturer, however, and they keep us sated with a steady stream of activity. After revealing the model’s specs, pricing, and availability in April, 2022, the brand debuted the model’s dedicated website. Most recently, the Hawk 11 development team sat down with Japanese media outlet Young Machine to give fans exclusive insights on the upcoming neo-retro.

When speaking about the idea governing the project, Development Manager and Assistant Chief Engineer Masahiro Yoshida acknowledged that the team set out to create a “fun bike that adults who have been riding bikes can find the freedom of half a day and go out to cherish the momentary bliss.”

Unlike other cowled modern-classics such as the MV Agusta Superveloce and the Triumph Speed Triple 1200 RR, the Hawk 11 won’t focus on peak performance. Instead, Honda hopes to attract riders seeking a balance between aesthetics and accessible power. To do that, the team turned to a tried-and-true powerplant.

“The engine is the same as the Africa Twin in terms of hardware,” admitted Power Unit Development Lead Yuji Kurasawa, “but by adjusting the throttle opening setting and making the engine brake a little stronger, we gave it a more direct sporty feel.”

Honda’s recently repurposed that same trusty twin for the Rebel 1100 cruiser. Leveraging that same mill for the upcoming Hawk 11 will place the futuristic café racer in direct competition with Kawasaki’s Z900RS Cafe. Team Green’s 948cc inline-four pumps out 109.5 horsepower and 72.3 foot-pounds of torque, setting up an inevitable slugfest between the two throwbacks. Hopefully, that battle extends to markets outside of Japan.

“As a derivative model developed with a different position from the current lineup, it is a model exclusively for Japan that has been embodied as a development method that incorporates the results of examinations such as how to manufacture corresponding to the market size/set number,” revealed Yoshida.

We know that Honda already slated 1,200 Hawk 11 units for the Japanese market, but the company has remained tight-lipped about the model’s export potential. We’re hopeful that changes in the near future. In the meantime, the full Young Machine interview (link below) should keep your Hawk 11 hankerings at bay.