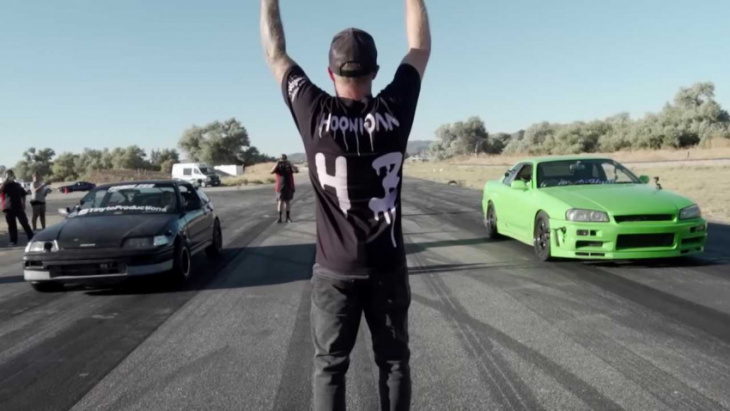 The 2001 Nissan Skyline and 1988 Honda CRX might seem like a strange pairing for a drag race, but the latest Hoonigan video is full of surprises. Neither car is stock, with the Honda arriving with a substantial upgrade by comparison, and the two face off in a pair of drag races with a special bonus round at the end for fun.

Powering the Honda is a modified B20 2.0-liter four-cylinder engine. It has a B16 head, and the mill makes an estimated 250 horsepower (186 kilowatts). Power routes to the front wheels through a five-speed manual gearbox. It’s down on power compared to the Nissan, but it’s the lighter of the two, as well, weighing just 1,850 pounds (839 kilograms). It has a seat, three pedals, a shifter, and not much else in this bare-bones runabout.

The Nissan makes a bit more power from its turbocharged 2.5-liter inline-six engine. It’s turbocharged, delivering 300 hp (223 kW) exclusively to the rear wheels. The engine pairs with a five-speed manual transmission, and the car is a lot heavier, tipping the scales at 3,100 lbs (1,406 kg). This gives the Honda a big advantage.

The two cars compete din a pair of drag races, best two out of three. The first race saw the CRX launch from the line early, leaving the Nissan in its rear-view mirror. Sadly, the Skyline could not close the gap, with the Honda winning the first race. The second race gave the Skyline an advantage, but it still wasn’t enough, with the Honda passing it and still winning.

The two compete in a final rolling race for fun, with the Nissan setting the pace. The two rocketed down the runway, with the Honda able to pass the Skyline before crossing the finish line. However, this was the closest race of the three.

The Honda crushed the Nissan in all three races. It just scooted along, quickly catching and passing the Nissan in each round, the lighter, front-wheel-drive hatchback outperforming the rear-wheel-drive Nissan.

Honda’s petrol small SUV is a compelling blend of style and specification, but the HR-V Vi X comes up short on performance and outright practicality

Squashing the competition Space & Interior  Comfort & Convenience  Fuel Economy  The third-generation Nissan Qashqai enters a market stiff with competition and the Japanese automaker has had to fend off competitors in every direction. We tested the new mid-size crossover SUV to see if it still has what it ...

Can Nissan take Toyota’s Prado customers? Nissan says its new Pathfinder will lure customers from tough off-roaders like the Toyota LandCruiser Prado and Ford Everest – but it says it knows it won’t get all of them. Nissan has this week launched its new Pathfinder, as well as its ...