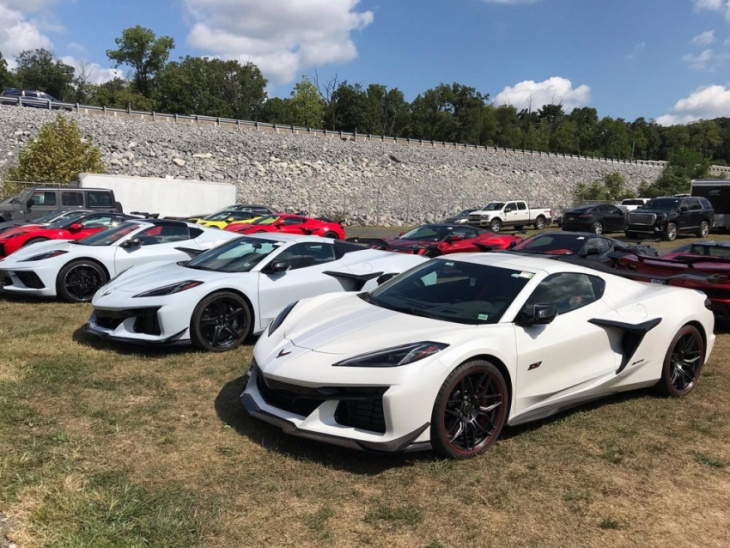 Over a dozen C8 Z06 test fleet cars including VIN #002 were found hiding in the VIP parking lot at Corvettes at Carlisle 2022.

The Corvettes at Carlisle show is always a must attend event for Corvette fans. But this year there was some extra buzz as it was the 40-year anniversary of the show. On top of that it was announced that a couple C8 Z06 models would be on display. Sure, enough a couple Z06 models were on hand for attendees to see up close and even sit in. It was exciting but as you can imagine it was an area that drew big crowds, so it was tough to really get a good look while so many others were trying to do the same. But those were not the only Z06 Corvettes at the show, not by a long shot. Stashed away at the far end of the fairgrounds were over a dozen C8 Z06 Corvettes from the GM Z06 test fleet! They were just sitting there with no one around. 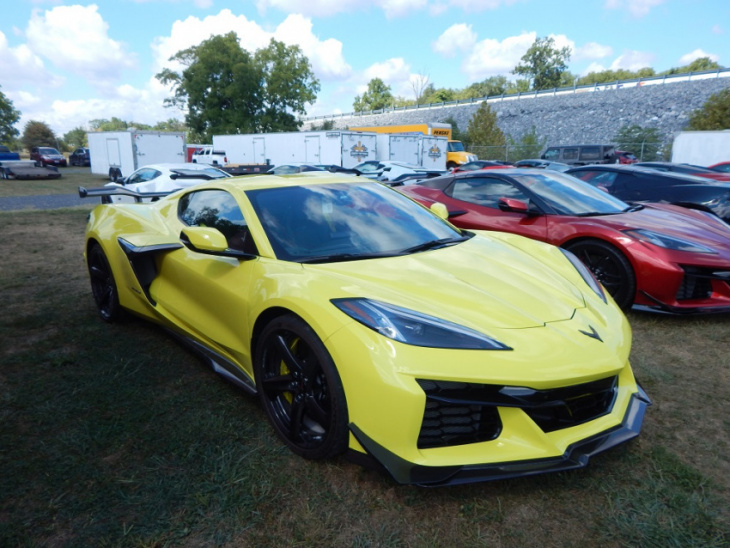 My media credentials come with VIP parking at the event. Typically, this section is filled with SUVs and trailers and other tremendously unexciting vehicles. But as I got out of my car, I looked across the lot and saw a C8 Corvette, but it looked a little different. Holy crap! That is a Z06! Parked next to another Z06, parked next to another Z06! There were nearly 20 C8 Z06 test fleet cars just sitting there. Some with the Z07 package and some without. Nearly every color was represented and a 70th Anniversary Z06 was in the group as well. Realizing that these were test fleet cars I looked at the VINs. All were in the single or double digits, but the Accelerate Yellow Metallic car was Z06 VIN #002. The rest of the show can wait, I am going to be here a while. This had to be the largest C8 Z06 gathering outside of a GM facility to date. It warranted a closer look. Seeing a Z07-equipped car parked next to a standard Z06 really shows you how much more aggressive the Z07 package makes the car look overall. The standard car does not look bad by any means but visually it looks a lot closer to the standard Stingray. It comes down to your preference of course. If you like the more understated wolf in sheep’s clothing, look then the standard car is for you. But if you want the extra performance and the look of a racecar then the Z07 package is a must have option. Of course, the Michelin Pilot Cup 2R tires will last about as long as a soft serve ice cream cone on a hot summer day. But you are buying a track weapon after all. 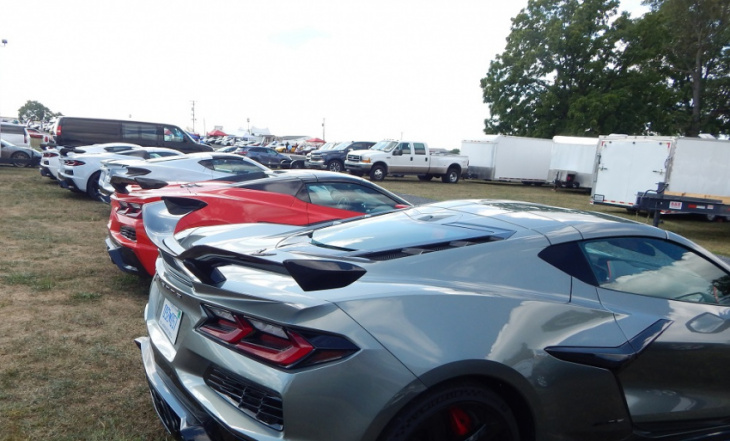 And while I am spending your money, I suggest you spring for the carbon-fiber wheels as well. Sure, they are lighter, but they also look fantastic. A tougher call is coupe or convertible. Open top driving with that FPC V8 right behind your head has to be epic. But the engine is just lovely to look at and it is a shame you lose that view with the convertible. 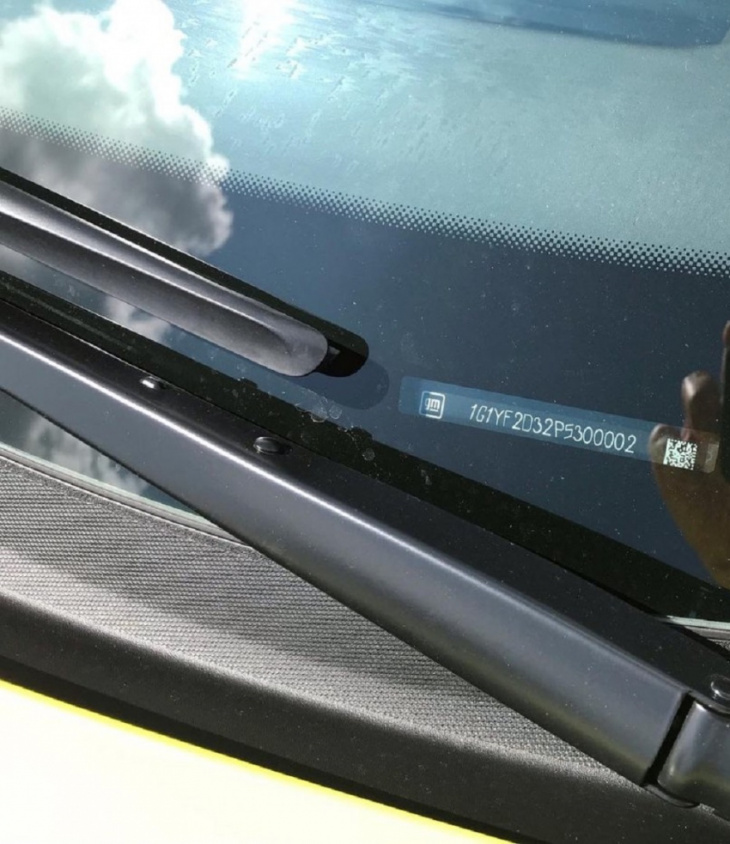 I saw that stunning yellow Z06 coupe with the Z07 package and I started to wonder if I really need a 401k. Then I noticed that it was VIN #002. At that point I started to wonder how serious grand theft auto charges in Pennsylvania are. Just kidding folks, don’t get any ideas. But it was exciting to see one of the very first Z06 test vehicles right in front of me. Sadly, this car, along with the rest in this test fleet, likely has a date with the crusher in the future but at least I was able to capture it before it gets destroyed. 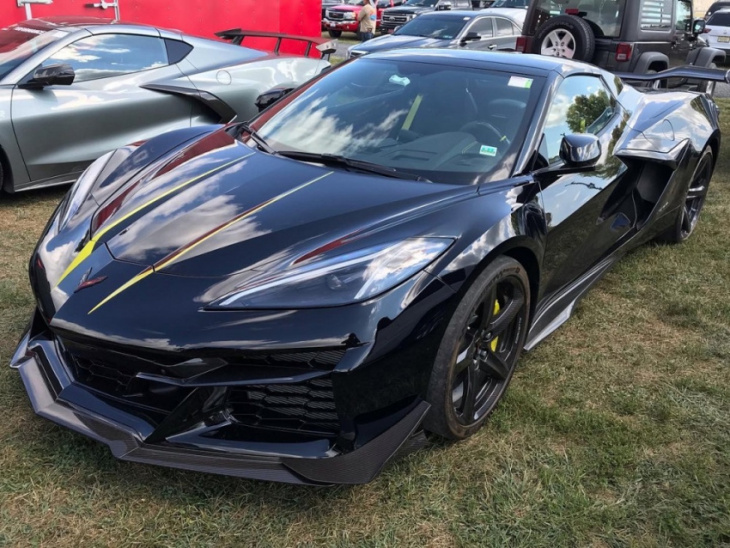 There is no color you could paint a Z06 that would prevent me from wanting it. But this was a unique opportunity to see how the Z06 looks in several different color options. There was at least one Z06 that I saw painted in the following colors: Red Mist, Torch Red, Accelerate Yellow Metallic, Black, White Pearl Metallic Tri-coat, Arctic White, Ceramic Matrix Gray Metallic, and Hypersonic Gray Metallic. They all looked incredible and picking a favorite would be like choosing your favorite child. But if I was forced to choose among this test fleet it would probably be that Black Z06 convertible with the Z07 package. It also had yellow stinger stripes and yellow seat belts and stitching that setoff the yellow brake calipers. That is a damn good-looking car. 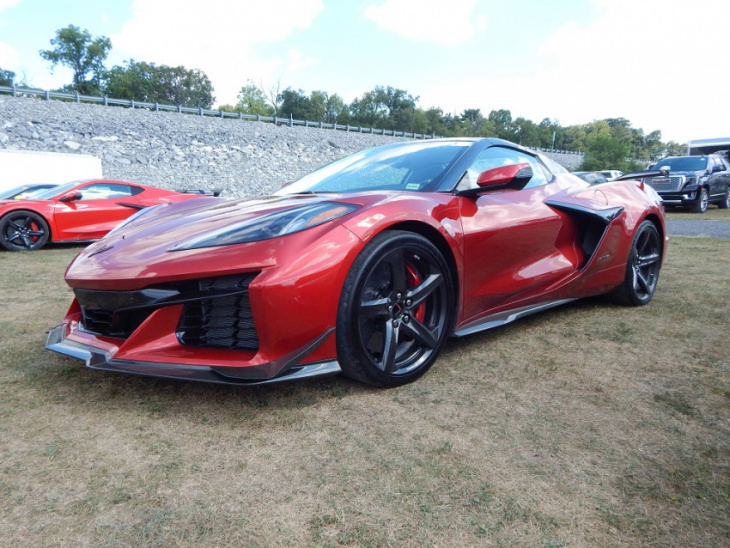 Of course, if you ask me the same question tomorrow, I very well may have a different answer. The White Pearl Metallic Tri-coat on the 70th Anniversary Edition Z06 car looks good with the overall package. I would not kick it out of the garage, that is for sure. There were no losers in this group, all the cars looked amazing. 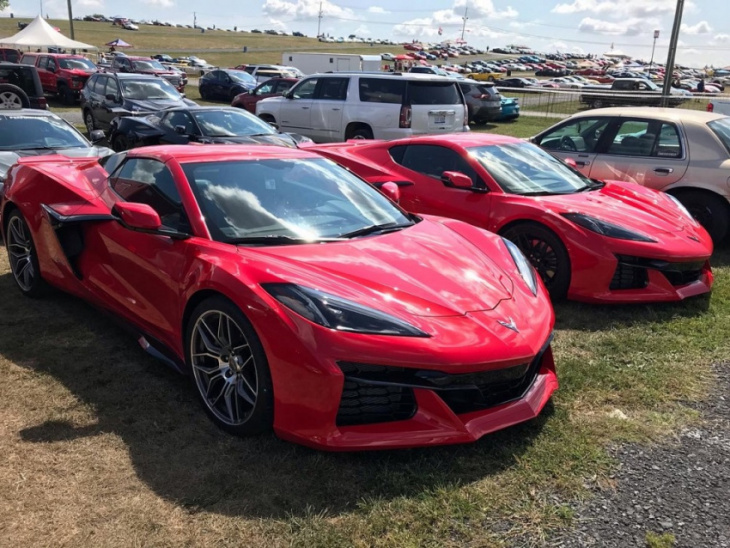 Parting was such sweet sorrow. I knew it would be a very long time if ever I would see so many C8 Z06 Corvettes together again. It was an incredible find and I feel lucky that I was able to stumble upon them. Chevy needs to figure out a way to get these things built and in customers hands. I am hoping that in Carlisle 2023 there are some actual customer cars to ogle.