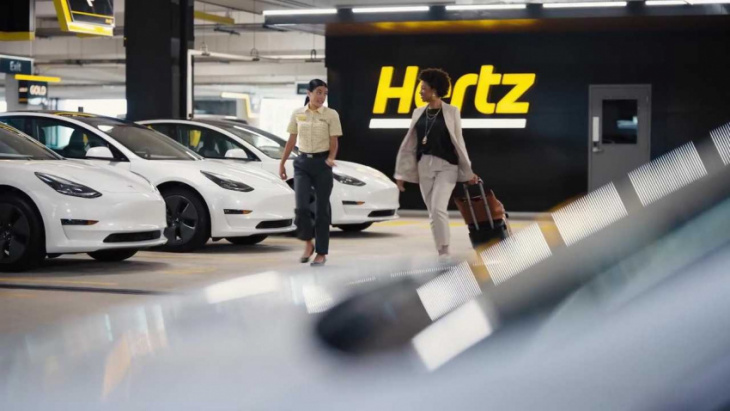 Hertz has placed some massive electric vehicle orders over the past year. The rental car company has ordered 100,000 EVs from Tesla, 65,000 from Polestar and, more recently, 175,000 from General Motors.

The company already has Tesla Model 3, Tesla Model Y, and Polestar 2 electric vehicles in its fleet, so it can share a thing or two about how popular these vehicles are with its customers.

As it turns out, Hertz’s EV fleet is off to a great start, particularly Teslas, according to CEO Stephen Scherr. In an exclusive interview with Yahoo Finance Live (see video at the bottom of the page), the executive said that “demand has been very, very solid” for EVs, which currently make up about 5 percent of the company’s fleet.

“We’re seeing demand not just among leisure travelers but also among corporate travelers, where in fact corporations want their employees in an electric vehicle to satisfy some of their own carbon footprint objectives.”

Scherr added that Hertz has also been renting to Uber and Lyft as part of their ridesharing network, noting that “demand across all three has been very strong.” The executive also revealed that bookings for the next couple of months have been positive and are quite strong for the holiday season as well.

Hertz’s CEO pointed out that EVs have contributed to some substantial savings for the company in maintenance costs. That’s something to be expected given that electric vehicles have far fewer moving parts than their internal combustion engine counterparts and require fewer service visits.

“For Hertz, the maintenance is appreciably lower on electric vehicles. We’re seeing it 40-50% lower, just given the nature of the car itself,” Scherr said.

Finally, the head honcho addressed the issue of range anxiety that some customers may have, explaining that Hertz is actively working to secure charging support for its electric car fleet. For example, the rental car company announced a new EV charging station deal with oil giant BP on September 27.

Hertz plans to have thousands of charging stations across the United States by the end of 2023 as part of the agreement, with Scherr stressing that he is chasing similar charging station deals.

The rental car giant aims to have 25 percent of its fleet composed of electric vehicles by the end of 2024, and the cars ordered from Tesla, Polestar and General Motors will help it achieve that goal.