The 2021 Dodge Durango Hellcat was supposed to be the last Durango with a Hellcat engine. It was that fact that led to thousands of people paying a premium price for what was supposed to be the last Hellcat engine ever to be seen in the Durango. Yet now Dodge is bringing it back, and 2021 Durango Hellcat owners are pretty upset about it. After all, they paid top dollar for the exclusiveness of the last available Hellcat Durango. So how much did they pay? Here’s a breakdown of the cost of a 2021 Dodge Durango Hellcat and what that price included. 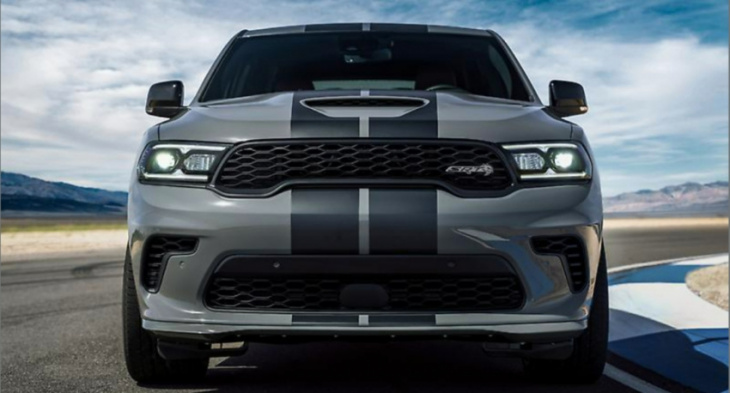 How much was the 2021 Dodge Durango Hellcat?

The 2021 Dodge Durango Hellcat price was $82,490 when it was first released, according to The Drive. You could first order one in November of 2020 and it had sold out its first 2,000 units by January of 2021. That was all that Dodge was supposed to make of the Durango Hellcat, but it didn’t stop there. It decided to make another 1,000 units. Then, there were to be no more Durango Hellcats ever.

In fact, at the time that the first 2,000 Durango Hellcats sold out, Car and Driver wrote that “The automaker will build 2000 of the Hellcat models, and 2021 is the only year they will be produced, “ensuring that it will be a very special, sought-after performance SUV for years to come,” Stellantis’s Tim Kuniskis said.“

The 2021 Durango Hellcat price was way over its base model

If you wanted the 2021 Dodge Durango Hellcat, you really wanted it. That’s because it cost about $50,000 more than the base model Durango, which had a starting price of $33,260. What did that extra fifty grand get you? 710 hp, 645 lb-ft of torque, and a capability of 180 mph. It had a 6.2-liter Hemi Hellcat V8 engine matched to and was matched to an eight-speed automatic transmission. It was also supposed to be able to reach 0 to 60 in only 3.5 seconds.

Because the 2021 Hellcat Durango was such a hit and sold out so quickly, Dodge was compelled to release another 1,000 units. Those also sold out, and Dodge was forced to end production of the Durango Hellcat.

Dodge just announced that it will be bringing back the Durango Hellcat in 2023. That should be the last run of the Hellcat engine, and not just for the Durango. The Charger and Challenger are also expected to say goodbye to the Hellcat with the 2023 model year.

Part of the reason that the Hellcat engine is being sent into retirement is changing emissions requirements. In fact, that was one reason that the Durango Hellcat was supposed to be canceled after the 2021 model year. So how much will you have to pay to get your hands on a 2023 Durango Hellcat? Car and Driver thinks it will cost around $84,000.

If you bought the 2021 Dodge Durango Hellcat, you may not be super excited that Dodge is bringing it back. However, if you felt like you missed out and really wished you’d bought one, you may be excited that you’ll have one more shot (well, probably one more shot).

The 2023 Dodge Challenger Black Ghost is the latest “Last Call” special edition, using the widebody Hellcat Redeye as its foundation. The Black Ghost gains an extra 10 horsepower for a grand total of 807 hp and is painted Pitch Black with a gator-skin vinyl roof pattern. This look ...

If you drove up and down Woodward Avenue in Detroit at night often enough back in the 1970s, there was a slim chance you might come across “The Black Ghost,” and if you did, the chances were even slimmer you’d be able to outrun it. To clarify, said Ghost wasn’t ...


View more: 2023 Challenger Black Ghost is Yet Another Nod to a Famous Dodge

If you regularly cruised along Detroit’s famed Woodward Avenue late at night during the 1970s, chances are you may have seen a black 1970 Dodge Challenger R/T SE with gator skin-style roof vinyl racing away from the lights, with its 426 Hemi roaring away. The car, owned by Detroit ...

Only 300 will be built, honoring a Detroit-area legend.

It was in dire need of a bath… The 1970 Dodge Charger is one of the most desirable American automobiles ever produced because of its incredible performance and outstanding styling, which set it apart from other Mopars. Being the last year of the charger’s most iconic body style, along ...

Dodge Brings The Super Bee Back