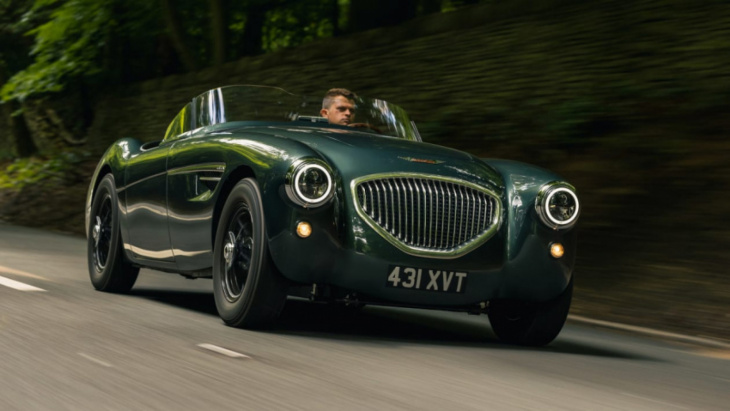 Our recent drive in the Ferrari SF90 Spider confirms that it shares very little with the Healey by Caton. They both have four wheels, seating for two and burn the highest octane fuel available (although the Italian has a sizeable battery to help with propulsion, too). They also share a similar price. Although it may surprise you to learn that the Ferrari is the cheaper of the two…

Okay, so while the prospect of a restomod Healey that’s based on the 90bhp 100/4BN1 built between 1953 and ’55 and costing more than a near-1000bhp Ferrari hypercar sinks in, here’s what the best part of half a million quid gets you. It allows you to hand over a Healey 100/4BN1 to a company called Caton, which is part of the Envisage Group, which you are unlikely to have heard of unless you follow the work of concept car builders closely. Caton takes your Healey, strips it to the bare bones and rebuilds it again with all the learnings it and Healey specialist JME, whose day job is building the most competitive Healey competition cars available, have garnered over the decades; this isn’t Caton’s first foray into the sector, having been responsible for a number of continuation car projects, most noticeably with Jaguar Classic.

The 2.6-litre four-cylinder engine is dispatched to JME for a capacity increase during a sump-to-cylinder-head rebuild, returning with 3 litres, 185bhp and 195lb ft, which is dispatched to the rear axle via a new five-speed Tremac gearbox that replaces the original three-plus-overdrive unit. In a car weighing 920kg and no bigger than an MX-5 it’s impossible not to grin like an idiot as you approach the iconic shape.

Healey aficionados will spot some changes, such as the de-seemed body, the lack of bumpers and the LED projector headlamps. The front grille is made from beautifully machined pieces of aluminium and the aeroscreen design mimics the Healey badge. 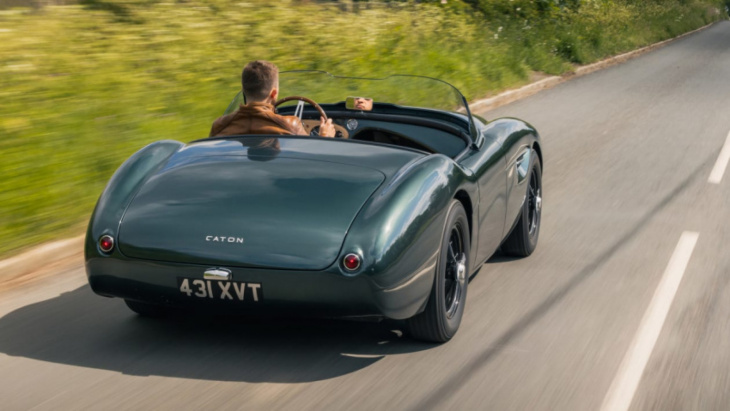 Changes to the cockpit mean that while there’s no room for a hood or a spare wheel there’s more leg room, although you’ll need to sit close to the fixed steering wheel in order to reach the new pedal box. This is no bad thing as it turns out, because the Healey needs a bit of arm movement when you get flowing.

Hold the starter button, listen for the fuel pumps, and with your foot on the brake press the starter again to fire the meaty motor into life with an unapologetic rasp as it clears its throat. It settles to an idle with a few lumps in it as the exhaust, exiting in line with your shoulder on this left-hand-drive prototype, amplifies the straight-four’s tune. There’s been no attempt to smooth things out nor quieten them down when it comes to the ‘big four’, which is just how it should be.

In fact none of the experience has been watered down. There’s weight to the clutch that anyone brought up on modern machinery will find alien, and it needs measured movement and a deft left foot. The shift feels solid and instinctive through the gate, the throttle a little tight at first and requiring more pressure to pick the revs up and get you on your way. When you do, the magic of a small, light responsive car washes over you, the experience all-encompassing. 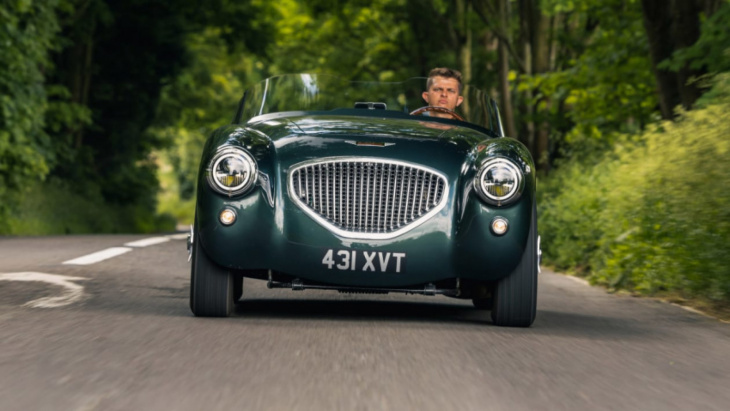 Above 1500rpm the 3-litre starts really filling its lungs, the exhaust note hardening as the induction roar increases and speed begins to climb and climb and climb. It’s not as responsive as a Caterham off the line, building speed in a more linear motion, but a 986 Porsche Boxster driver would need to be on their game to keep you at bay.

Although the Healey driver will be far busier. The engine will run to its 5000rpm peak but you find yourself changing up over 500rpm earlier to keep the four on the boil, optimising the gear ratios rather than hanging on to every last drop of power. On a warm day you’re working up a sweat, feet jumping across pedals to perfect heel and toe downshifts, right arm commanding the shifts when both hands aren’t required on the busy steering wheel.

And it can get rather busy because there’s not much reaction to your initial inputs; that old-school looseness of classic cars around the centre remains. It’s constantly busy as you position the Caton on the road to take advantage of its size and carve the neatest line through any curve. It wants to be hustled, with late turn-ins and as much throttle as you can manage, feeling the Michelin radials moving around beneath you and the leather-trimmed seat filling in the blanks left by the less than chatty steering. You’re instantly immersed in its charms and character. 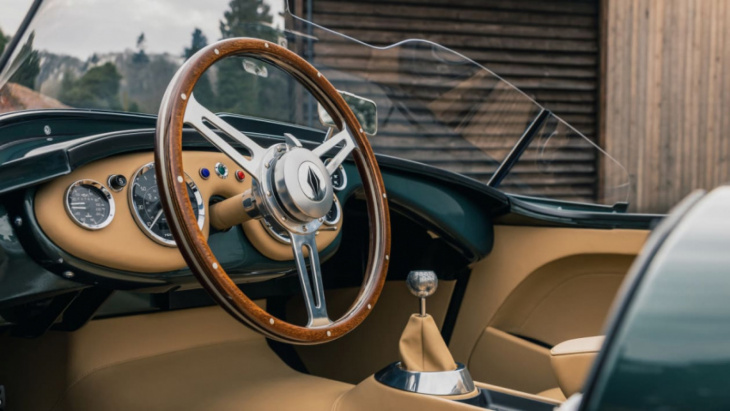 The brakes never feel overstretched, but while the body is nicely controlled, the suspension can run out of support pretty early if the surface gets choppy. But it’s nothing you can’t work with and nothing you wouldn’t expect from a car with leaf springs.

Justifying nearly half a million pounds for any car is nigh on impossible, harder still when you consider you could restore the roughest example of the donor car to original spec for a fraction of the cost. But to mangle that famous phrase: the experience will remain long after the price is forgotten.