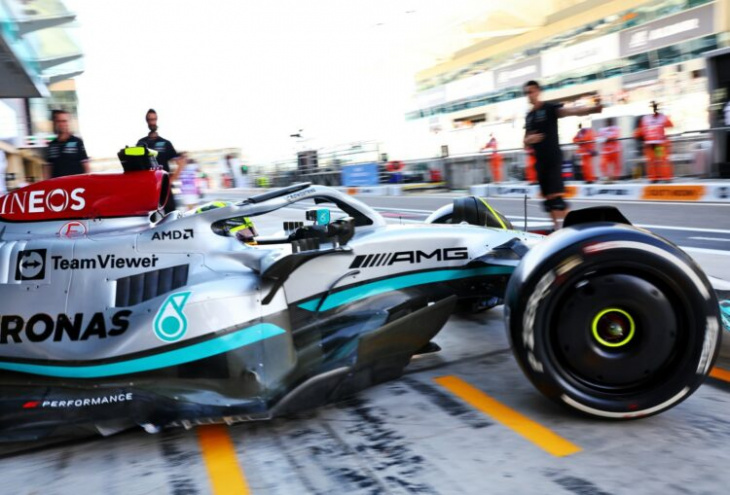 Lewis Hamilton continued Mercedes’ strong form as he led a 1-2 for the team during opening practice for Formula 1’s Abu Dhabi Grand Prix.

Mercedes captured its first victory of the season in São Paulo courtesy of George Russell and the squad closed the gap in the standings to Ferrari to 19 points.

Hamilton, yet to take a win in 2022, set a time of 1:26.633s to wind up 0.220s faster than Russell during the daytime practice session at the Yas Marina Circuit, held in hot and sunny weather.

Ferrari’s Charles Leclerc was third, a tenth of a second ahead of Red Bull’s Sergio Perez, as the pair prepare to contest second place in the standings.

There were eight driver changes for the session as several young drivers and reserve drivers carried out duties.

Liam Lawson had his first outing for Red Bull, in place of Max Verstappen, and wound up fifth overall, having previously appeared for AlphaTauri in 2022.

Robert Kubica was 14th as he returned to Alfa Romeo, while prospective 2023 Williams racer Logan Sargeant accrued the required mileage for another Super Licence point.

Sargeant did have one major moment during the session as he locked the rears into Turn 1 and rotated the FW44, but he came to a halt inches from the barriers.

Long-time Haas reserve Pietro Fittipaldi had another run in the VF-22 while IndyCar star Pato O’Ward made his first grand prix weekend appearance for McLaren.

O’Ward had an early issue in the MCL36 as he was instructed to remain in second gear, before cruising back slowly to the pits, but he returned to the track to complete the session.

Second practice for the Abu Dhabi Grand Prix is scheduled for 17:00 local time.