Hamilton accepts he was ‘definitely to blame’ for Alonso clash

Lewis Hamilton admits he was “definitely to blame” for the dramatic clash he had with Formula 1 rival Fernando Alonso at the start of the Belgian Grand Prix.

Hamilton’s car was pitched aggressively airborne after he and Alonso collided at Les Combes on the opening lap.

Mercedes driver Hamilton tried to pass Alonso around the outside for second place but turned in with Alonso squeezed against the apex kerb and the two cars hit each other.

The FIA stewards investigated the incident but took no action as they dismissed it as a first lap incident, suggesting Hamilton may have earned a penalty had the same accident occurred later in the race.

Though he escaped punishment, Hamilton took responsibility after the race.

“It was definitely my fault today,” he said.

“Unfortunate, it’s motor racing, I gave it everything.

“I tried to overtake on the outside of Turn 5, just didn’t leave quite enough space.

“It wasn’t intentional it just happened.”

Hamilton gets airborne in the clash with Alonso 👀

The Mercedes driver has damage and his team tell him to stop. Hamilton is out of the race. #BelgianGP #F1 pic.twitter.com/HGrde2u5BN

The rear of Hamilton’s car leapt into the air and landed with such a heavy impact it caused him to retire later around the lap, while Alonso was able to continue

Hamilton joked he almost broke his back when the car landed and said he was OK but suspected he would feel sore on Monday.

“I remember just looking at the ground so I knew I was quite high,” he said.

“I could hear something broken in the gearbox, so that coming down, would have broken so much in the back end and was told to stop.

“In that moment you’re hopeful you can keep going, but it was not meant to be.” 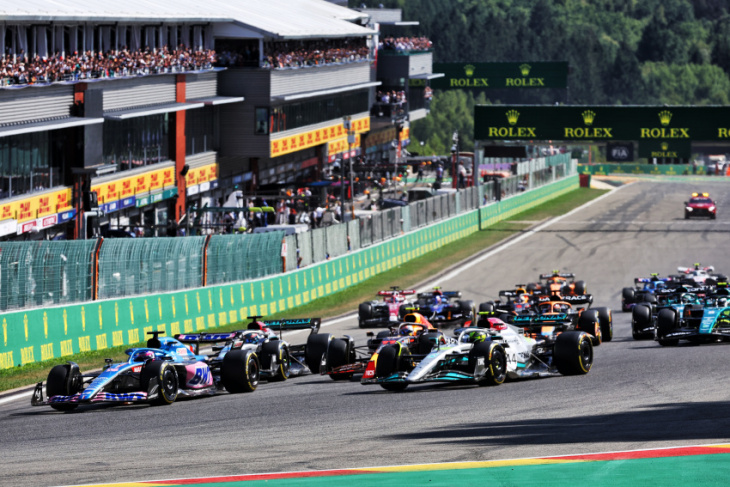 Hamilton drew scathing criticism from Alonso immediately after the collision.

Alonso called him an idiot over the radio and even said Hamilton only knows how to drive at the lead.

Hamilton suggested those comments would stop him from speaking to Alonso after the race.

“I don’t really have a response to it,” said Hamilton.

“I know how things feel in the heat of the moment.

“It wasn’t intentional, I take responsibility for it, it’s what adults do.”

Asked if he would speak to Alonso, Hamilton said: “No. I would have until I heard what he said.”

Keyword: Hamilton accepts he was ‘definitely to blame’ for Alonso clash