Haas’ car ‘not good enough at tracks like Spa’ 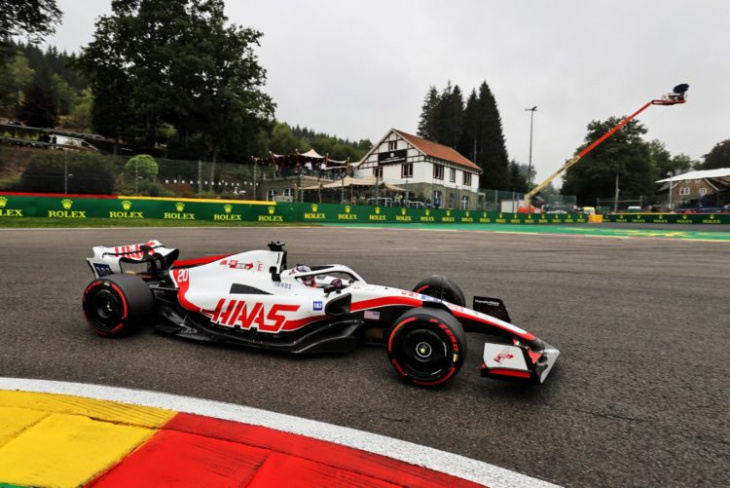 Haas boss Guenther Steiner expressed optimism that the squad’s display in Belgium was an outlier as it slumped towards the back of the grid.

Haas struggled for performance throughout the course of the weekend at Spa-Francorchamps, with both Kevin Magnussen and Mick Schumacher eliminated from Q1.

Magnussen briefly ran inside the top 10 in the race, having profited from grid penalties elsewhere and a chaotic opening phase, but swiftly slipped back through the field.

Magnussen classified 16th, with Schumacher 17th, ahead only of Williams’ Nicholas Latifi.

“I’m quite disappointed with the result but it was almost expected,” said Steiner.

Red Bull jokes to Mercedes: ‘Thanks for the rule changes’

“On a high-speed track where we need low drag, our car is just not good enough this year. We’ll try to make it up in Zandvoort where the car should be better suited to the race track like in Austria and Silverstone.

“We go away from here a little bit beaten up, but we are ready to come back again next weekend.”

Both drivers ran the upgraded VF-22, which was introduced for Magnussen only in Hungary, and the Dane is hopeful a two-car finish

“I think we had an idea that this wasn’t going to be such a strong weekend,” said Magnussen.

“This type of track isn’t really our track so we tried what we could, but we didn’t really have the pace.

“All in all, it hasn’t been the best of weekends, but we’ve got more running, collected more data and that will be useful going forward. I’m looking forward to the next race.”

Keyword: Haas’ car ‘not good enough at tracks like Spa’