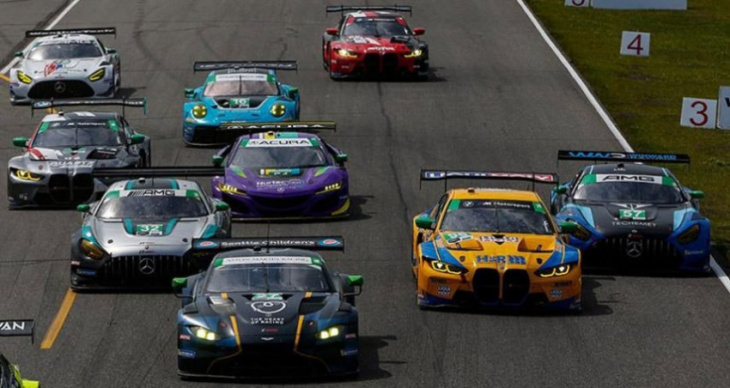 Through 10 hours of racing — in the daytime heat and then moonlit Georgia sky — the championship trophy will likely be settled among a half-dozen drivers representing four teams.

All are looking to become first-time champions in one of the WeatherTech Championship’s premier classes.

Two Americans, a Canadian, a Scot, a Belgian and a German will decide the GTD championship on Oct. 1. The drivers involved insist that, with the way this season has played out, no one is considered a flat-out frontrunner.

American Ryan Hardwick and teammate and Belgian Jan Heylen who co-drive the No. 16 Wright Motorsports Porsche 911 GT3 R are third in the standings, 57 points off De Angelis.

American Russell Ward and German Philip Ellis, who share the No. 57 Winward Racing Mercedes-AMG GT3, arrive at Michelin Raceway 140 points behind the championship leader, still mathematically eligible for the big trophy. The two are riding considerable momentum, coming off back-to-back victories (at Road America and VIRginia International Raceway) in the races leading into this championship finale.

“When it comes down to being this close at the end, anything is possible,’’ Hardwick said. “Our team has been in this position the last couple years, actually. In 2020, Patrick Long and I were down to the final race (at Sebring) … and we needed one (more) car to be in between us and (the No. 86 Meyer Shank Racing) Acura that year. We didn’t get that one car, but we went on to win the race.

“Jan (Heylen) and I last year were in a similar situation in Michelin Pilot Challenge. It came down to the last race at Road Atlanta and that one did go our way.”

These frontrunners have certainly proven their might in the longer endurance races.

Heylen, Hardwick, Zacharie Robichon and Richard Lietz teamed to win the season-opening Rolex 24 At Daytona in the No. 16 Porsche. The first three of that quartet will reunite for Motul Petit Le Mans.

While McAleer and the No. 32 Mercedes haven’t won a race this year, they did finish third in the Rolex 24 and second at the Mobil 1 Twelve Hours of Sebring Presented by Advance Auto Parts. Mike Skeen and Dirk Mueller will be McAleer’s co-drivers at Michelin Raceway.

“We’ve always kind of been a strong car at Road Atlanta. (It) just really seems to suit the Aston (Martin), the sort of high-speed flowing track, similar to Watkins Glen or Mosport,’’ De Angelis said. “So definitely an advantage there, especially this being a pretty meaningful race, obviously the championship decider.

“But it’s an endurance race — obviously long — so unlike a sprint race, qualifying doesn’t really seem to matter or help as much. A lot of things can happen over that long time period. At the end of the day, you can only really do your job and the team must execute, but a lot of the other factors are out of your control. We hope we can get as lucky as we did last year, but you never know what will happen.”

That’s certainly been the case this year in the heralded GTD class.

Heylen and Hardwick started strong with the win at Daytona and captured a victory two races later at WeatherTech Raceway Laguna Seca. But it’s been six races since their last triumph.

De Angelis and his team had a more gradual ascent, stringing together three second-place finishes to go with the Watkins Glen win. And of course, Ward and Ellis have been red hot.

“We have huge momentum right now,’’ Ellis said. “We have had great races in the last month or two and, to be honest, we have been fast the entire year but didn’t have the results come our way or the luck to finish the races we should have finished.

“At Petit, we’ll do what we have the last few races: do the best we can on our side. We have great guys on the team to try and win a third consecutive race. I just want to try and keep ourselves in the best position we can. It’s not over yet, but we’re going to need some luck to clinch it at the end.”

There will undoubtedly be points monitoring as the race goes on. None of the drivers seemed overly concerned about keeping up with the championship standings — at least until sunset.

“You have to make it through the first eight hours to be in position to even think about the championship,’’ De Angelis said. “And that’s a lot of racing.

“The traffic situation is crazy, always super busy, very chaotic. There’s not much room to give and take there. The last few pit stops in the last few hours, I think if you can position yourself ahead of somebody or be where you need to be to have that point gap to win the championship, then you’ll do so. But you have to make it to that point.

“Before then, we’ll just keep our heads down and survive and make sure we’re in a fighting position for the final few hours, and then really start focusing on what we need to do to make the championship happen.”