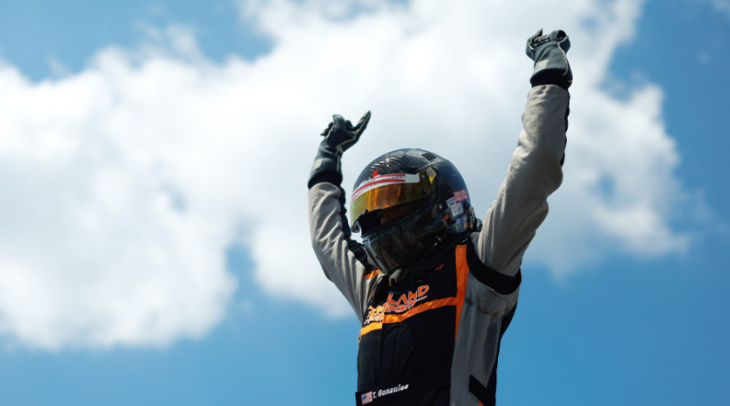 ALTON, Va. – Tyler Gonzalez scored his third Idemitsu Mazda MX-5 Cup presented by BFGoodrich Tires win of the season at VIRginia International Raceway after starting from the last row of the grid on Saturday.

Gonzalez fought through the field for 45 minutes to take the win by 0.076-second over Connor Zilisch. Defending champion Gresham Wagner completed the podium. After missing the Road America weekend due to a scheduling conflict, Gonzalez returned to Mazda MX-5 Cup competition in grand fashion with his win. His Saturday at VIR got off to a rocky start, however, when he experienced a mechanical issue in qualifying that kept him from setting a time. As a result, Gonzalez started the race from 27th on the grid. It may have worked in his favor since the race started with several cars making contact in Turn One. The incident damaged the car of championship contender Selin Rollan, who was forced to pit for repairs and lost a lap. He may have lost more than that if a full-course caution hadn’t come out to retrieve Bruno Carneiro’s car from turn 14.
On the restart it was the championship leader Jared Thomas who found trouble and eventually had to pit for repairs. Thomas would end up finishing 17th.

While all this was going on, Zilisch, Wagner and polesitter Aidan Fassnacht were trading places at the front of a seven-car train. At the back of that train was Gonzalez. Zilisch and Wagner started to break away from the pack but were then surprised to see Gonzalez catching them. The race was coming down to a three-way fight for the win. On the final lap, Gonzalez was able to get around Zilisch for the lead. As the pair came into the final corner, Gonzalez dropped a tire in the dirt and it looked like Zilisch might have the momentum to pass him down the front straight. It wasn’t to be: Gonzalez beat Zilisch to the line by 0.076-second.
“These races are always filled with mayhem from the get-go,” Gonzalez said. “It’s all about trying to avoid it. We did a great job at that, kept the car 100 percent clean and ready for tomorrow. I was really happy where I was in second place on the last lap. You don’t really want to lead here on a long straight away because you’ll just get blown by. I was able to push Connor (Zilisch) and we got a little bit of a gap and made it a two-car race. We are definitely going to take any chance we can get whether we are in the championship or not. We are just here to win some races.”

There was no questioning who was to receive the Hard Charger Award: Gonzalez picked up 26 positions during the 45-minute race. “It was hot here today,” Gonzalez said. “This track is all about drafting, but you have to keep the nose clean to get cool air on it. I guess we did alright! Copeland Motorsports gave me a great car and we topped it off with a win today.” The runner-up finish bolstered Zilisch’s lead in the rookie of the year standings, an award that comes with an $80,000 prize from Mazda. “I like being in the lead,” Zilisch said. “I like being in control of the race. It worked for me at Road America, where they battled for second and I got the gap. Obviously, that didn’t happen here though. I was going to have to make a risky block to keep him (Gonzalez) behind me, but I knew Jared [Thomas] was having a rough points day, so I just wanted to finish, and I would rather finish second than DNF right now.
“I’m just proud of the Hixon Motor Sports team for the car they bring me. That’s first, first, second for us in the last three races. It’s super hard to be disappointed at that. We have a lot of momentum heading into that last three races of the year, so hopefully we can keep up these good finishes and maybe bring home a championship.”

Although he led the most laps of the race, Wagner seemed content to watch Zilisch and Gonzalez battle in front of him. “The first half of the race there were a lot more people in it,” Wagner said. “It was one of those things where you shuffle or be shuffled. It’s fun but it’s nerve racking when it’s like that. I knew I had some good pace though. “Connor (Zilisch) played it smart and stayed behind me,” said Wagner. “I think he recognized what was going on. He pushed me. I thought it was going to be a race between us and then out of nowhere, in the last 10 minutes, Tyler (Gonzalez) just motored up to us. Once that happened, it was a matter of hanging onto the podium. It’s getting down to the end of the season, points are tight. I would have gone for it if I could have, but there wasn’t really a good opportunity to. I knew the guys behind me in points and Jared [Thomas] in front of me all had issues. Basically, everyone in the top five in points, except for Connor (Zilisch), hit something. That factored into my decisions. When they get a DNF, sometimes you take a third.” Points were definitely on everyone’s mind at VIR. With only three more races to go, every position was crucial in the fight for the $250,000 championship prize.
Matthew Dirks and Sam Paley completed the top five.