Headlights are easy to overlook but get everyone’s attention when they’re too bright. Several GMC Terrain model years are under recall for that very issue. But some owners are not happy with GMC’s solution. One owner even calls the fix “unprofessional and ridiculous.” 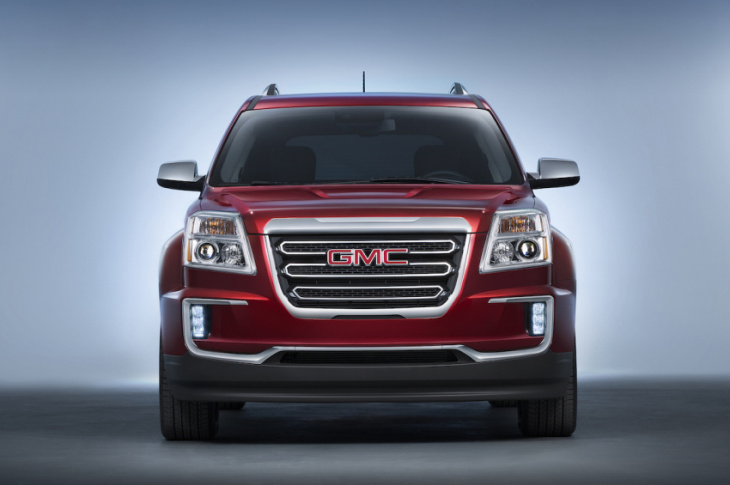 Complaints of excessively bright headlights have plagued certain GMC Terrain models. Most of the recalled units are 2010 to 2017 models. The issue worsens during inclement weather, such as sleet, snow, and fog. When this happens, oncoming drivers often find themselves blinded.

So the automaker has recalled 740,581 GMC Terrain units. Because of the large number of vehicles involved, many observers were curious to see how GMC would address the issue. Now, we have more information, and many affected Terrain SUV drivers are frustrated with the automaker’s solution.

GMC’s fix for Terrain headlights has some owners fuming

GMC wanted an exemption from fixing the problem despite “admitting the bright spot could cause glare” and knowing the affected Terrain headlights were “out of compliance with Federal Motor Vehicle Safety Standards,” Autoblog reports. But the automaker also argued that “the errant beam didn’t affect other road users.” However, the National Highway Traffic Safety Administration (NHTSA) said the light was “four times brighter than the maximum allowable low-beam brightness.”

After going back and forth with the NHTSA, the auto giant finally decided the simplest fix was instructing authorized service technicians to apply a piece of frosted tape to the headlight cover.

Some affected Terrain drivers are not pleased. One Twitter user wrote, “A piece of tape is the solution to the recall of the headlights that GMC gave. This is not a permanent fix, and it’s unprofessional and ridiculous.”

Other Twitter users shared their displeasure. However, one person pointed out the solution was valid because it’s inexpensive and doesn’t require owners to spend considerable time waiting for repairs to their Terrain SUVs. But few other commenters shared that viewpoint.

Cars.com reports that the GMC Terrain has 18 active safety recalls filed with the NHTSA. That number applies to all model years.

One major recall involves the powertrain in 2018 and 2019 Terrain models, which is missing bolts on the start/stop accumulator. There’s also an issue with the right front intermediate driveshaft, which could fracture and separate while driving. Some of those SUVs have an insufficient coating on the brake calipers, causing gas pockets that could reduce rear brake performance.

But at least parts are available to fix the issue — although, in most cases, they’re more expensive than a piece of tape. However, when it comes to the Terrain’s faulty windshield wiper modules, there are no parts available to repair the affected SUVs.

The problem with specific Terrain windshield wipers is that the motor stops working, rendering the wipers useless. When the sun is shining, there’s no real problem. But when the rain pours, drivers have difficulty making it from point A to point B.

It remains unclear when GMC will get the parts needed to fix the wiper issue. In the meantime, affected Terrain drivers must deal with it as best they can.

What Did the Letters GMC Originally Stand For?

Chevy Colorado and GMC Canyon Have Only 1 Engine Option, Here’s Why

TFLoffroad's GMC Hummer EV Breaks Down While Off-Roading In Moab

This is not the first time the all-electric pickup had issues on an off-road trail.

Well, this confirms it: GMC is working hard on a Sierra HD AT4X Expect gonzo off-road capability from this heavy-duty truck Judging by these pics, it seems a reveal should happen this year As quickly as GMC began mining the credibility its AT4 sub-brand had built for itself, it ...

This Hummer EV lost drive at the worst possible moment.


View more: Watch a GMC Hummer EV Break Down and Lose Drive While Off-Roading in Moab

What Do the Chevy Bolt EV and GMC Hummer EV Have in Common?


View more: What Do the Chevy Bolt EV and GMC Hummer EV Have in Common?

Would the GMC Canyon be the best platform for a Jimmy? Would a full-size Sierra work best for a GMC Jimmy? If it works for the Bronco, shouldn’t it work for GMC? The 2022 Ford Bronco is on track to meet or beat its 2021 sales figures of over ...

SoFlo Strikeforce Kevlar-Coated GMC Hummer EV Called the Strikeforce, the custom Hummer also features a suspension lift and a weatherproof interior. For those who find the GMC Hummer EV a bit too bland, the folks at South Florida (SoFlo) Customs have a very green solution. In this instance, green ...

1. Ford Ranger 2. Nissan Frontier 3. Toyota Tacoma How do the three models compare as alternatives to the Chevy Colorado? The Chevy Colorado takes on some of its rivals toe to toe and comes out a winner time after time. The popularity of compact trucks helps boost sales, ...

The Canyon has gotten a bunch of upgrades for 2023, but its top trim isn't cheap.

Getting the GMC Hummer EV Could Be Impossible

Why Is the 2023 GMC Sierra Denali So Popular?