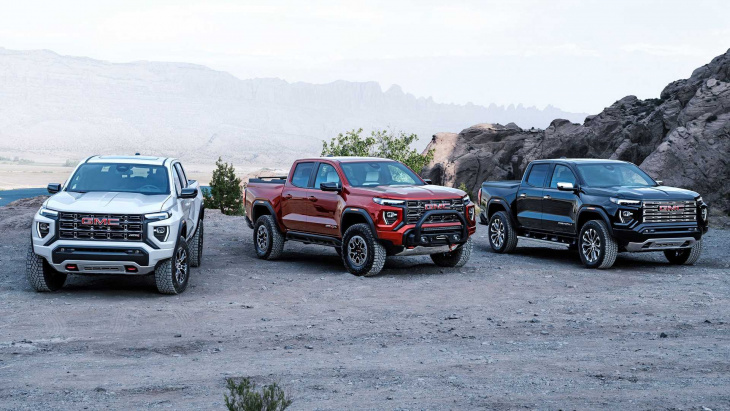 The 2.8-liter diesel is no longer available.

With underbody cameras, lifted ride height with Multimatic DSSV dampers, and many other hardware upgrades, the new GMC Canyon is one very capable truck. One change over its predecessor that the customers may not be happy about, however, is the lack of a diesel engine in the portfolio. Just like the new Chevrolet Colorado, the Canyon is offered with just one mill but there’s a very logical explanation for that. General Motors executive shines more light in a new interview.

Nick Katcherian, Chevrolet Colorado and GMC Canyon Chief Engineer, recently spoke to Muscle Cars and Trucks and told the publication the turbocharged 2.7-liter four-cylinder unit found under the hood of the two products is simply too good and there is simply no need for a diesel option. The torquey mill performs better in basically every department than the previous 2.8-liter Duramax diesel and GM doesn’t want to make things more complicated by offering different engines.

“It really has to deal with the fact that this powertrain has all the torque that you need. You get it faster, and so when you look at the advantages that the diesel offered in the past, and you compare it against this engine, this engine does a much better job at all of that,” Katcherian told the online publication.

The new 2.7-liter inline-four is offered in three power stages for Chevy. The base version has 237 horsepower (177 kilowatts) and 259 pound-feet (351 Nm) of torque and above it is a version with 310 hp (231 kW) and 390 lb-ft (529 Nm) of twist. The range-topping variant – the only one available for the new Canyon – has a peak output of 310 hp (231 kW) and 430 lb-ft (583 Nm). This means the actual options offered for the Colorado are three, though they are all based on the same hardware setup with minimal modifications for the entry-level engine.

New Canyon And Colorado Are Out:

With this simplification of the engine range, it’s much easier for General Motors to produce the trucks at the Wentzville plant as there are fewer different components between the different engine options, trim levels, and packages.

“When you look at underhood packaging and all the stuff we house around it. We can do a lot of the same configurations, so if you look at our engine line at the plant, that part that builds off the harness and stuff before it gets dropped into the truck. That allows us to have a very similar build process for both engines,” Katcherian explained.

Keyword: GM Exec Explains Why Chevy Colorado And GMC Canyon Have Only One Engine Option

First Impressions Inside The Cabin Under The Hood Under The Chassis Paying The Price High It’s been a weird year for GM’s pickup trucks, as 2022 saw a hurried refresh of both the Chevrolet Silverado and the GMC Sierra land mid-summer as replacements for the poorly-received redesign that had ...

What interest rate is GMC offering? What about leasing a 2023 GMC Sierra? What about Sierra Heavy Duty incentives? When a truck maker has tons of incentives available for new trucks, it could be a red flag that the truck isn’t selling well. They want to move some trucks ...


View more: What Are the New 2023 GMC Sierra Incentives?

GMC’s Sierra 1500 pickup pushes further upmarket for the 2022 model year with the addition of the new Denali Ultimate grade, and we’ve just tested it. Buyers get all of the Sierra’s top-shelf products, along with much-improved trim options for the cabin, and handy driver-assist features for towing and ...

A recent GMC Terrain headlight recall affects over 700,000 SUVs GMC’s fix for Terrain headlights has some owners fuming Other Terrain recalls Headlights are easy to overlook but get everyone’s attention when they’re too bright. Several GMC Terrain model years are under recall for that very issue. But some ...

Are the 6.2-liter and 6.5-liter Detroit Diesel engines the same? When did GM add turbocharging? How can a new buyer improve the diesel engine’s performance? What else is wrong with these Silverado diesel trucks? The Detroit Diesel 6.5-liter GM engine first appeared in 1994 in the full-size GMC and ...

Or maybe to kill beasts… If there’s one thing your car collection likely is lacking, it’s an old hunting truck. You might be lying to yourself, saying your 2003 Ford F-150 with the tick of death qualifies since you hit Bambi with it back in 2007, shamelessly scooping the roadkill ...

2023 GMC Acadia AT4: Is This a Real Off-Roading Midsize SUV?

With New GMC Electric Truck, GM Is Looking to Take on the Full Lightning Range

GMC Now Has an EV Truck, Too, but This New Sierra EV Truck Has 754 (!) Horsepower