Two years after he nearly won as a fill-in driver, Russell is finally a Grand Prix winner. 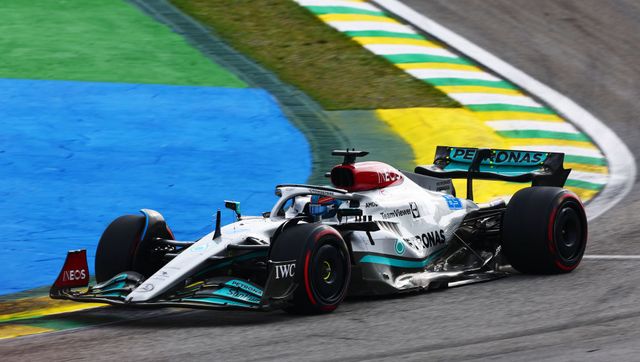 Two years ago, then-Williams driver George Russell had the opportunity of a lifetime. Crowned champion Lewis Hamilton tested positive for COVID-19 ahead of the season’s second race in Bahrain, leading the Mercedes-affiliated Russell to earn a one-week promotion to the team’s lead car for the race. He responded with an astonishing performance, one that would have likely ended in a win if not for a mistake in the pit lane. When he finally joined Mercedes AMG F1 full time this season, he found himself at a team well behind its once-dominant pace. 21 races into a 22-race season, however, he finally got that long-awaited first win.

On a day when every other driver at every other leading team was thrown into chaos, George Russell’s day was calm. He pulled away from teammate Lewis Hamilton on the start, built a gap while trouble erupted behind him, and pulled away even after a late safety car put him directly ahead of multiple drivers with tire advantages. It was a smooth, calm performance from a driver who has been as advertised, a future #1 driver in the making who can comfortably coexist with seven-time champion Lewis Hamilton.

Hamilton fought back up to second, but his day was far from calm. He and Max Verstappen collided in a fight for second on an early restart, with Verstappen assessed a 5 second time penalty for forcing his way through to the inside line while behind Hamilton. Verstappen was forced to pit, while Hamilton rejoined around tenth. He battled back to fourth with relative ease, then spent the day’s final stint catching both Sergio Perez and Carlos Sainz Jr. to take and hold second.

Perez and Sainz battled throughout the day, but Sainz was able to stop during a virtual safety car before a full safety car late and used that tire advantage to move ahead within a few laps. Charles Leclerc, who was spun early in the race by Lando Norris and actually crashed lightly in the incident, was able to grab fourth in the late scramble, but not given third on team orders despite the potential reward in his battle for second in the championship with Perez. Fernando Alonso fought up to fifth, Verstappen recovered to sixth, and Perez fell all the way to seventh on his old tires. Esteban Ocon, Valtteri Bottas, and Lance Stroll completed the points-scoring positions.

The 2022 season comes to an end with the Abu Dhabi Grand Prix next weekend. With George Russell’s first win secured and Mercedes no longer winless on the season for what would have been the first time in the hybrid V-6 era, the team can now shift its focus to avoiding Lewis Hamilton’s first winless season ever.

Part of the team that developed the Saab 99 Turbo, Geoff Kershaw went on to found Turbo Technics and create a host of performance icons of the original turbo era