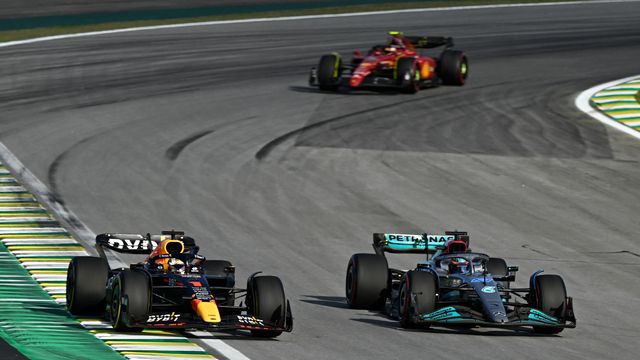 George Russell’s first season with Mercedes AMG F1 has not gone as planned, but there have been moments of glory. He has his share of podiums and a pole, strong performances in a car that has been far below pre-season expectations all year and has only rounded into competitive form in the past few race weekends. Now, he even has a win. Kind of.

Russell started third in today’s sprint race, but quickly moved up to second as he and Max Verstappen quickly moved past shock pole-sitter Kevin Magnussen. Russell was able to stick with the leading Verstappen throughout the early laps, pressuring him in DRS range and in braking zones on multiple occasions. He eventually got past Verstappen, a rare case of a Mercedes beating a Red Bull in a straight-up battle on track this season, and began to pull away. When Verstappen’s front wing took some damage in a battle for second with Carlos Sainz Jr., he never looked back.

Sainz was ultimately able to pass Verstappen too, taking second for Ferrari. Lewis Hamilton fought up from eighth to get to fourth quickly, then moved past Verstappen himself shortly after his wing was damaged. A grid penalty for Sainz means that Hamilton will start second pending an investigation over a potential start procedure violation, a would-be Mercedes front row lockout. Verstappen held on to fourth ahead of teammate Sergio Perez, meaning that Red Bull will lock out the second row. Kevin Magnussen, who officially earned pole with yesterday’s qualifying run, finished in just eighth.

The full-points portion of the Brazilian Grand Prix gets underway tomorrow afternoon. A win by either Russell or Hamilton would be the first for Mercedes this season and would save the team from its first winless season in the V-6 hybrid era.