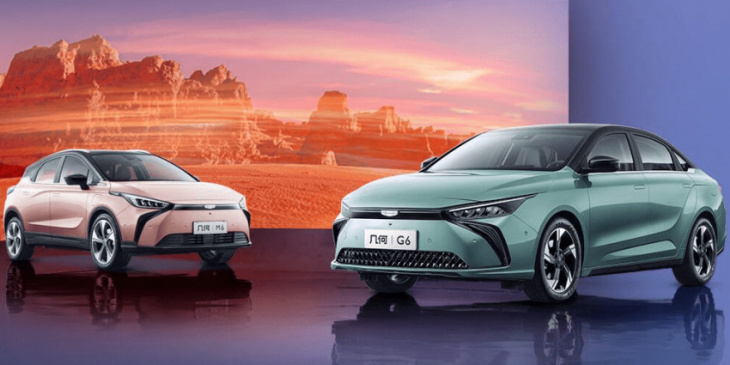 The Geely brand Geometry has launched two new electric models in China. These are the G6 sedan and the M6 SUV, both of which start at a base price of 149,800 yuan (approx. 20,250 euros) after subsidies.

Both models produce 150 kW and are offered with two battery options (53 and 70 kWh). In the G6 sedan, this means a CLTC range of 480 and 620 kilometres respectively, in the M6 SUV it is 450 and 580 kilometres. The Chinese CLTC cycle generally results in higher ranges than the WLTP test.

The similarity of both models in terms of technology and naming is also reflected in the design, which features comparable elements at the front, such as the look of the headlights or the positioning of the air intakes and the brand logo. The wheelbase is also the same at 2.70 metres, but beyond that the bodies are adapted to their respective concepts. The somewhat stretched sedan comes to a length of 4.75 metres (with a height of 1.50 metres), while the SUV is significantly shorter at 4.43 metres, but only six centimetres taller.

The G6 and M6 differ from the previous Geometry models by another special feature in the interior: they are the first models for which Geely or Geometry has cooperated with Huawei. The cockpit of the vehicles uses Huawei’s operating system called “HarmonyOS” and should thus enable seamless connectivity to smartphones.

They are the brand’s number 5 and 6 models in China after the Geometry A, Geometry C, Geometry E and Geometry EX3. Geely is also reportedly bringing the Geometry C to Eastern Europe: it will be sold under the Geely brand in Hungary, the Czech Republic and Slovakia from the first half of 2023. Other Geometry models could follow.

Keyword: Geometry is launching a new electric sedan and SUV

Pininfarina's sleek coupe is now importable via the 25-year rule, but you won't be the first to get one.

The concept will debut in January at the CES 2023, marking a return for Peugeot to America since the brand is not coming back to the US.