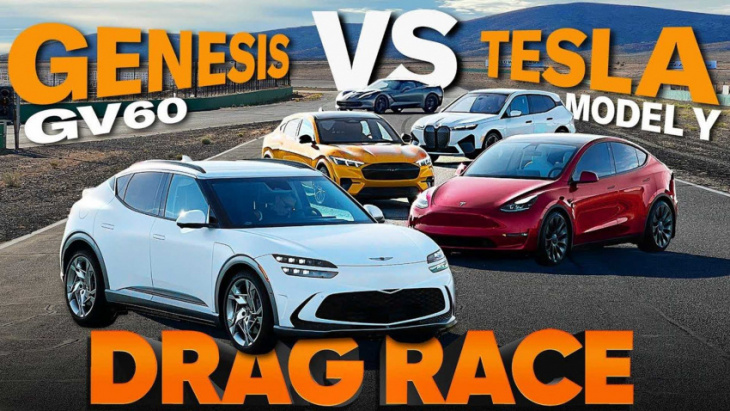 Being the last of the three Hyundai group electric crossovers to arrive on the market, after the Hyundai Ioniq 5 and Kia EV6, the Genesis GV60 already has some catching up to do, but it doesn’t look like that’s going to be a problem. In this video where it is drag raced against other electric crossovers and a Chevrolet Corvette C7, it has no problem staying ahead.

The first part of the video published by Hagerty is focused on seeing how the 435 horsepower Genesis GV60 Performance all-wheel drive performs in a quarter-mile drag race alongside a 516 horsepower BMW iX xDrive 50 and a 480 horsepower Ford Mustang Mach-E GT. It crosses the line before both of them, but the Ford is actually quicker to reach sixty, and by the end of the run the iX also appeared to be catching up.

Then they compare it against a 466 horsepower C7 Corvette and even though by the end it was traveling at a higher speed and it would have easily won a longer race, the Genesis still wins by a very narrow margin.

The final contender is also the GV60’s biggest rival, the 470 horsepower Tesla Model Y in comparable Performance trim with a 470 horsepower dual-motor setup. And it is another win for the Genesis, this time by 0.03 seconds, posting a 12.30 second quarter-mile time, compared to the Tesla’s 12.33 seconds; the Genesis was also doing one mile per hour more (111 mph compared to 110 mph) as it crossed the finish line.

The takeaway from this, as the video’s host Jason Cammisa points out, is that Genesis has been on an upward trend for the last few years and it doesn’t really seem to set a foot wrong. Its models have been improving from generation to generation, some of them have won awards, and now its all-important sporty compact electric crossover looks set to continue the positive trend.

Public debut is scheduled for the LA Auto Show later this month.