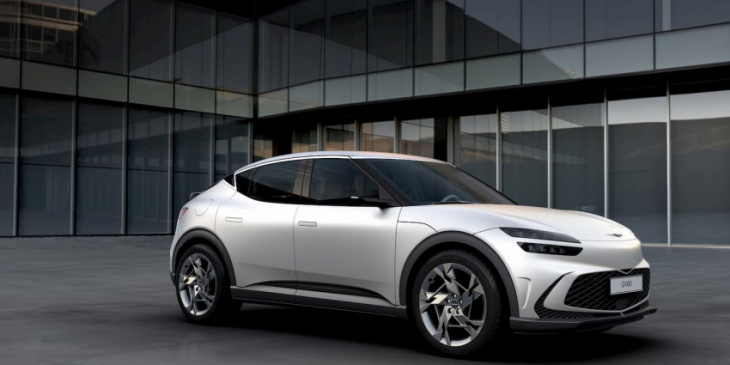 Now might be your chance if you’ve been waiting to buy the Genesis GV60 EV SUV. The Korean luxury automaker announced Tuesday that its flagship electric SUV, the GV60, will be available in four more US states starting in the fall.

Hyundai’s luxury brand, Genesis, has big plans for an all-electric future. The young automaker announced its vision of carbon neutrality by 2035 last year. With this in mind, Genesis will only launch electric models after 2025.

Its first all-electric release, the Genesis GV60, the brand’s luxury SUV EV, starts at $58,890 with long-range capabilities of 248 miles.

US buyers started receiving orders of the all-electric Genesis SUV just a few months ago in late May. Since its release, Genesis has revealed a number of innovative features like fake engine noises (which drivers can customize from futuristic sounding to more realistic engine sounds) and a crystal sphere shift knob (pictured below).

The GV60 is built on Hyundai’s E-GMP platform, which was co-developed with California EV startup Canoo. The EV platform hosts other Hyundai electric models, such as the Hyundai Ioniq 5, the brand’s first electric car in its new EV series.

Buyers had their first opportunity to purchase Genesis’s electric crossover as the GV60 rolled out to select dealerships in California, Connecticut, New Jersey, and New York. The Korean luxury automaker is now announcing its EV SUV will be available in four more US states.

Where is the Genesis GV60 available to buy

In addition to the four states listed above, starting in September, the Genesis GV60 will now be available at certain retailers in Arizona, Nevada, Utah, and Washington.

GV60 buyers in the US will also be eligible for three years of 30-minute complimentary charging sessions. The offer comes as Genesis partnered with Electrify America in May. In the press release, the CEO of Electrify America, Giovanni Palazzo, talked about the benefits of the partnership, saying:

By offering three years of complimentary 30-minute charging sessions to new Genesis EV drivers, together we’re helping create an electric transportation future that benefits drivers and communities across the U.S.

Genesis is focusing on building an all-electric lineup with eight EV models expected to achieve 400,000 in sales annually. Meanwhile, Hyundai is looking to speed up its timeline for building cars in the US.

A new report suggests the automaker may break ground on its first dedicated EV plant later this year, with commercial production starting in 2024.

At the same time, Hyundai is reportedly shifting focus at its Montgomery, Alabama, plant to produce the GV70 EV, its first EV made in the US.

Hyundai is doubling down on its EV plans with the Genesis GV60 reaching four new US states. The Korean automaker aims to achieve 7% of the global EV market with 1.87 million electric vehicle sales by 2030.

The newly passed Inflation Reduction Act is doing precisely as designed, creating more accessible sustainable options while incentivizing building EVs on US soil. Several automakers, not just the Hyundai group, are looking to manufacture electric vehicles in the US.

With Hyundai accelerating its plans to build “made in America” EVs, the automaker is a sneaky threat in the EV market. I wouldn’t be surprised to see the Korean automaker’s success continue as new electric models roll out.

The 2023 Genesis GV60 has been available in which states? Which additional 4 states now sell the GV60? An overview of the 2023 Genesis GV60 Rising above its history as a cheap car manufacturer, Hyundai developed the Genesis luxury brand less than 20 years ago, moving into the premium ...

Much More Than Just A Placeholder Everyone’s doing the electric dance these days, even spin-off brands like Hyundai’s Genesis, with this Electrified G80 sedan. And just so we’re all on the same page, they’ve actually named it the Electrified G80. So, let’s unplug and go for a spin, and see ...

Genesis is finally releasing its first vehicle based on the Hyundai Group’s all-electric E-GMP platform – the GV60. A more luxurious sibling to the Hyundai Ioniq 5 and Kia EV6, the 2023 Genesis GV60 lands in Australia exclusively with dual-motor all-wheel drivetrains, led by a high-spec Performance variant that will ...

Genesis G80 Electrified on sale in Australia in September

The Latest EVs from Hyundai, Kia, and Genesis Are Fast-Charging Champs

2022 Genesis G80 Sport Review: The Most Germanic of Korean Sedans

US: Genesis GV60 Sales Increased to 284 In July