The 2023 Mazda CX-60 made its world debut this morning after first images and details of the all-new premium SUV were leaked across the internet yesterday.

We already know much about the new CX-60 following previous leaks and teasers, but as the first of a new generation of Large Product group models based on an all-new rear/all-wheel drive platform to emerge from Mazda, its importance cannot be under-estimated.

Confirmed for Australian release later this year, the five-seat 2023 Mazda CX-60 will be both the Japanese brand’s first ever plug-in hybrid vehicle (PHEV), its first rear-wheel drive SUV and its first six-cylinder model in about 20 years. 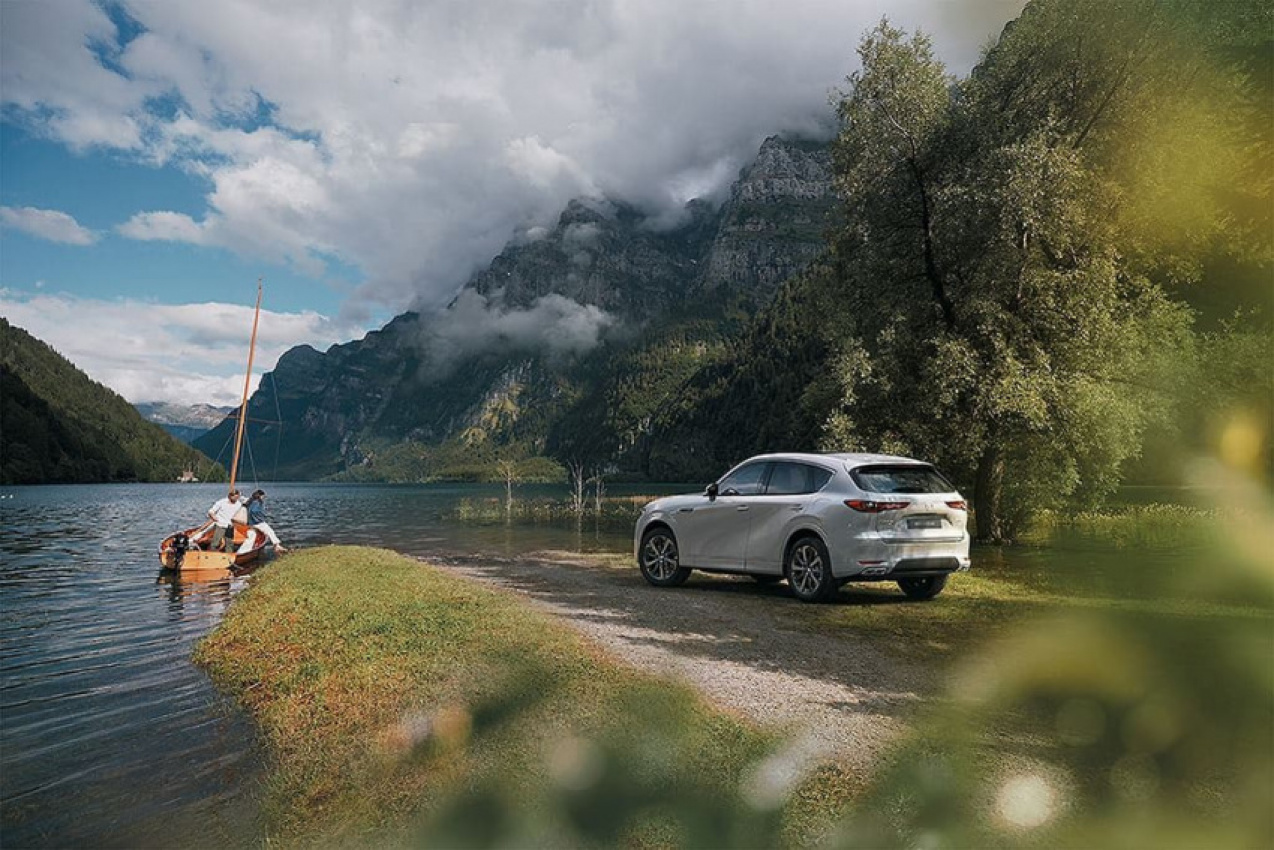 Matched with all-wheel drive, the CX-60 PHEV will be Mazda’s most powerful model ever, accompanied by brand-new inline six-cylinder petrol and diesel engines matched to both AWD and rear-drive.

Positioned above the company’s top-selling model, the CX-5 mid-size SUV, which is currently priced from $32,190 and will itself be updated this month and renewed next year, the CX-60 will be pitched as Mazda’s first direct rival for luxury medium SUVs like the Audi Q5 and BMW X3 as part of the popular mainstream brand’s upmarket push.

Australian pricing is yet to be announced, but expect top-shelf e-Skyactiv PHEV versions to easily eclipse the cheapest CX-8 ($39,990). In Europe, where first deliveries will take place from mid-2022, the CX-60 will be launched exclusively in PHEV guise and priced from £43,950 ($A79,155) in the UK.

CX-60 production commences in Japan on March 11 and Mazda will reveal the domestic-spec version in early April, but expect Australia’s CX-60 to closely resemble the European model detailed here when it arrives Down Under – as soon as the third quarter of this year. 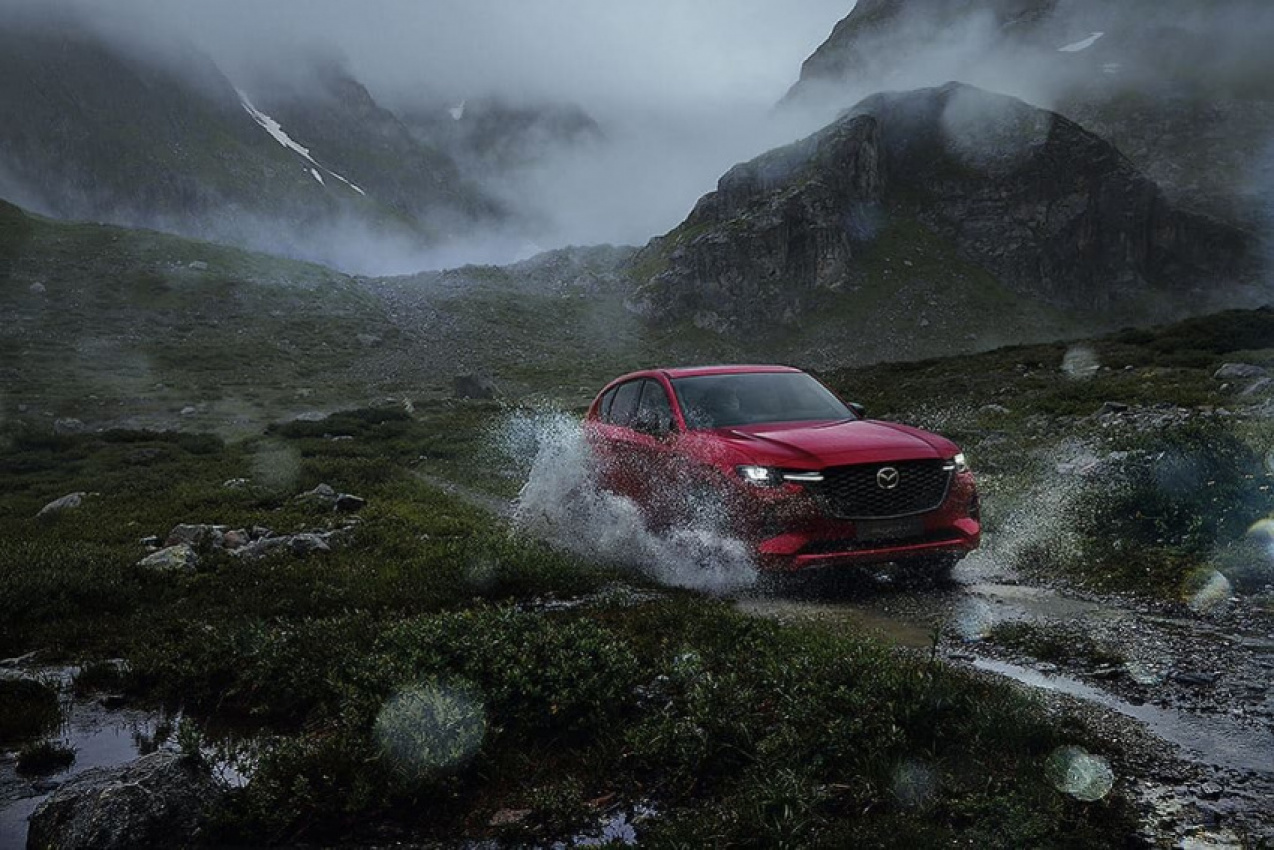 Further afield, Mazda Australia is also considering the local release of the all-new and closely related CX-80, which is essentially a stretched seven-seat version of the CX-60 for Europe and Japan, as per the current CX-5/CX-8.

Australians could also gain access to the upcoming US-focussed ‘wide-body’ CX-70 five-seat and CX-90 seven-seat SUVs, which are expected eventually replace the existing CX-8 and CX-9.

Previously, a redesigned Mazda6 was expected to be the Japanese car-maker’s first new-generation rear-drive six-cylinder model, but plans for a new Mazda6 appear to have stalled.

That liberates 44mm and 50mm more front and rear shoulder room and an extra 132 litres of cargo space behind the second row, with a sizeable 570-litre boot that expands to 1148L with the rear seats folded.

While all of the CX-60’s extra body length over the CX-5 lies between its axles with a 2870mm wheelbase (up 170mm), rear legroom is actually 17mm tighter at 990mm, likely due to its move to a longitudinal engine layout and the resulting increase in front wheel to dashboard ratio.

The CX-60 is no lightweight either, with Mazda listing kerb weights for Europe’s PHEV-only model at between 1980kg and 2072kg,which is over 500kg more than a base CX-5.

While the CX-60 will be available with new straight-six non-turbo petrol (3.0-litre) and turbo-diesel (3.3-litre) engines paired with a 48-volt mild-hybrid assistance, regenerative braking, a new eight-speed automatic transmission (with multi-plate clutch rather than torque converter) and both rear- and all-wheel drive, so far Mazda has only announced full powertrain specs for Europe’s PHEV model.

Mazda’s first PHEV system is based around the company’s familiar 2.5-litre four-cylinder petrol engine (141kW/261Nm) paired to an electric motor (100kW/250Nm) powered by a 17.8kWh lithium-ion battery between the axles, producing combined outputs of 241kW of power and 500Nm of torque. 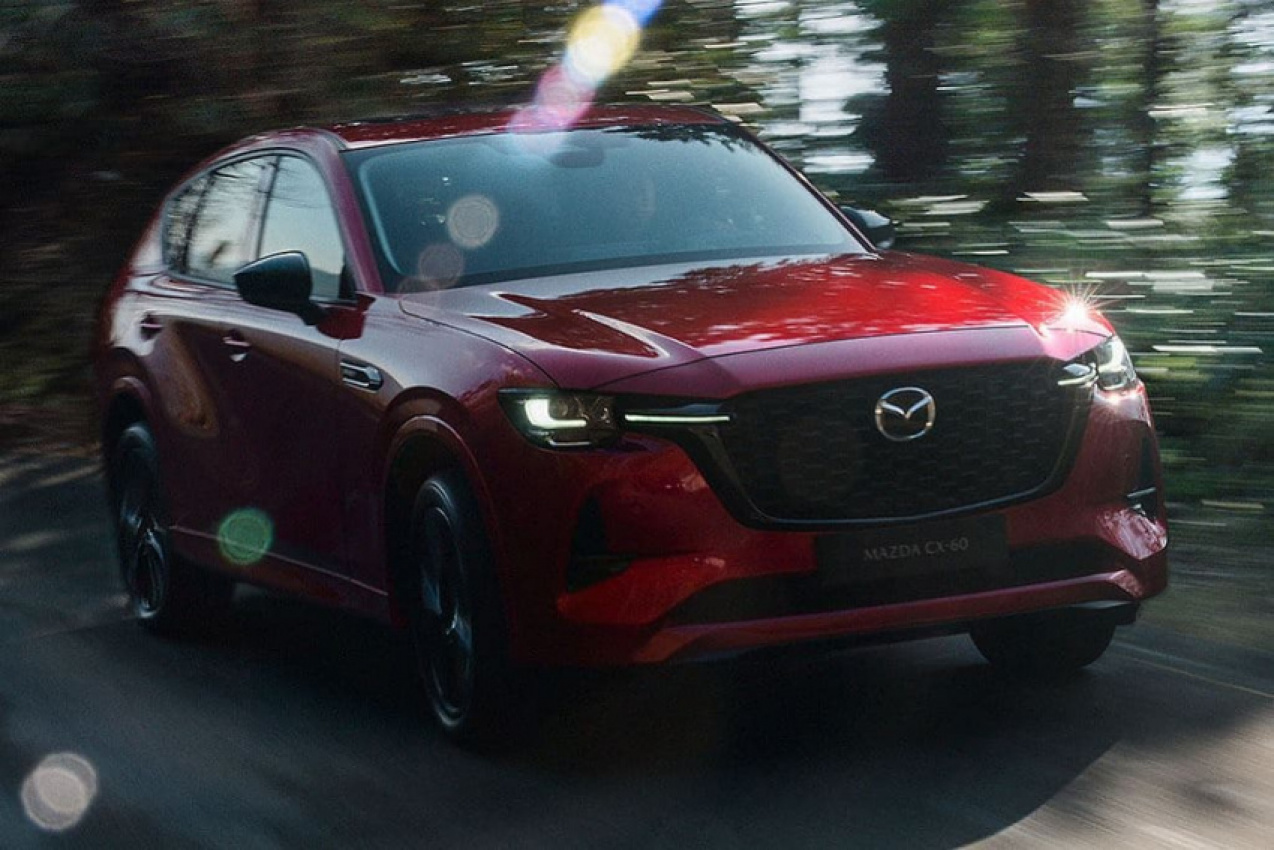 That makes it the most powerful production Mazda ever built and the CX-60 will also offer 60km of claimed electric range (up to 100km/h), 0-100km/h acceleration in a claimed 5.8 seconds (almost 2sec quicker than 2.5-litre turbo CX-5 models) and an electronically-limited top speed of 200km/h.

Mazda is claiming WLTP fuel consumption of just 1.5-1.6L/100km in Europe – with maximum use of an EV mode that’s in addition to the four drive modes available in petrol and diesel models – Normal, Sport, Off-Road and Towing. 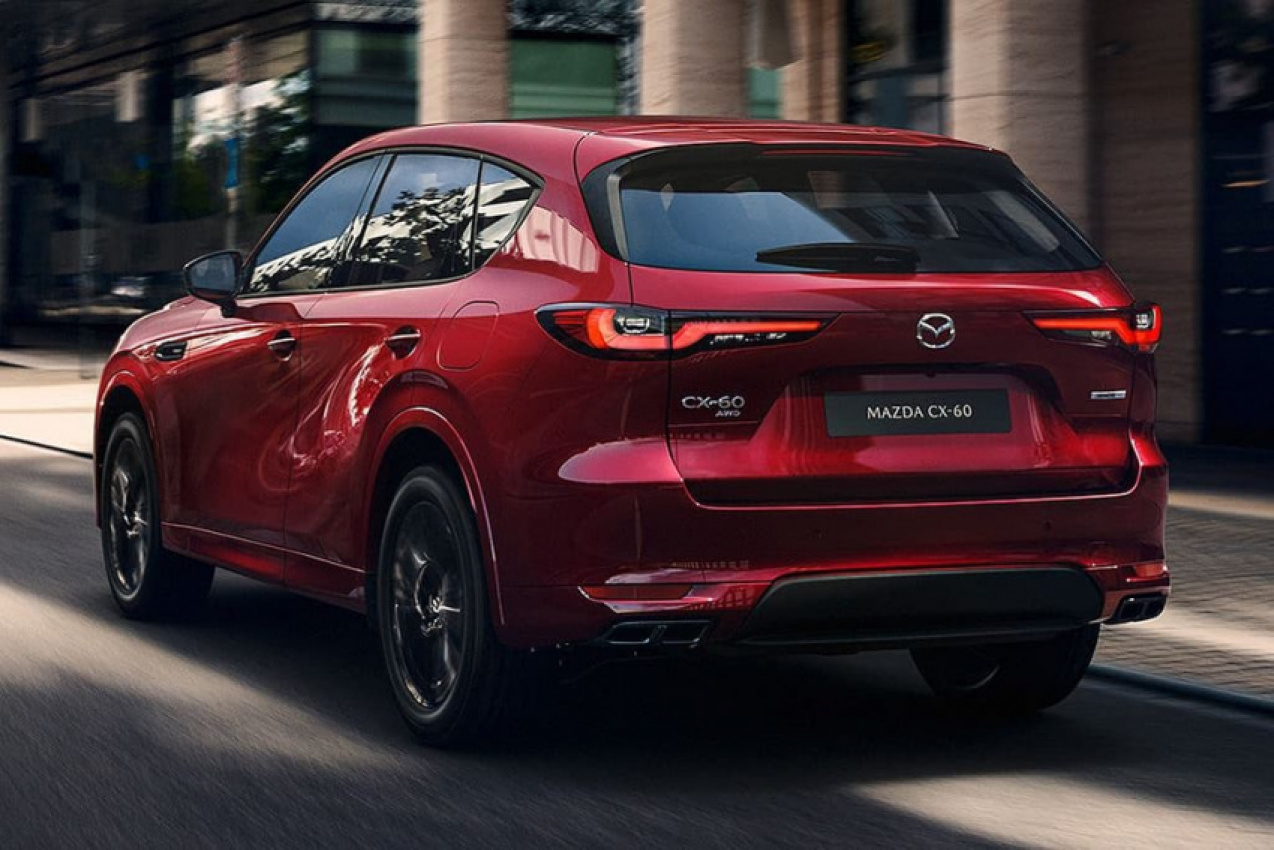 There is no DC fast-charging capability, but Mazda says an AC home wallbox will charge the battery from empty to full in four hours.

The CX-60 PHEV has a braked towing capacity of 2500kg – which is 500kg more than a diesel CX-5 and a tonne more than mid-size plug-in hybrid SUVs like the MG HS Plus EV and Mitsubishi Outlander PHEV – but maximum vehicle weight (GCM) is listed at just 2667kg.

Within the CX-60’s sleek but familiar exterior proportions, which nonetheless bring a longer bonnet and more cab-backward side profile than any previous Mazda SUV, lies a similarly upmarket cabin packed with technology, luxury features and high-quality materials.

The CX-60 is the first Mazda to bring a fully-digital instrument cluster and the 12.3-inch unit is mirrored by a 12.3-inch dash-top multimedia touch-screen with wireless Apple CarPlay and – for the first time – wireless Android Auto, plus digital radio and satellite navigation. 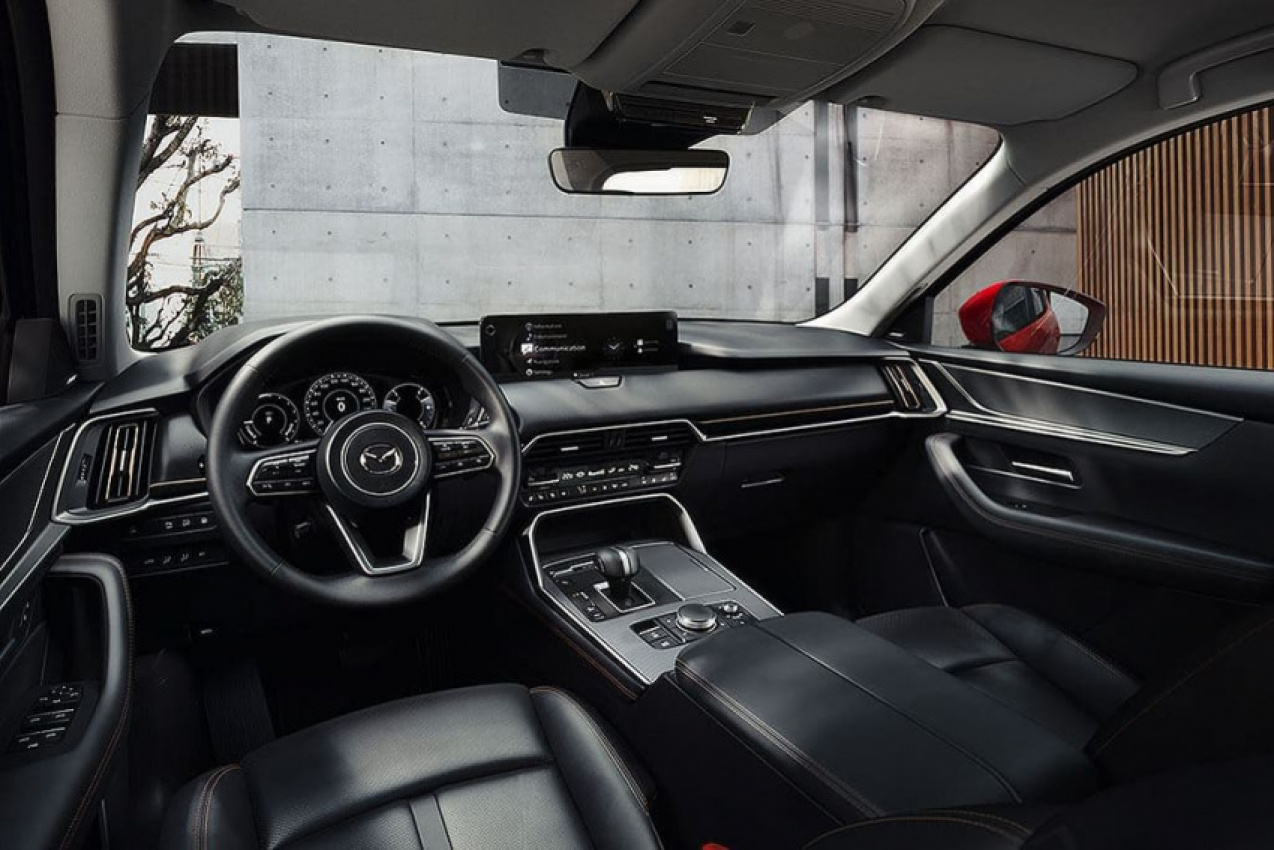 In addition to an updated version of the Mazda Connect infotainment system, the CX-60 brings a new Driver Personalisation System that employs a camera with facial recognition to read the driver and their height to automatically adjust the seat, steering wheel and head-up display.

Five-star safety is all but a certainty thanks to a stiffer body courtesy of stronger front, side and rear body structures, a pedestrian-friendly bonnet, PHEV battery protection and airbags both front-centre and rear-side in addition to front, side and curtain. 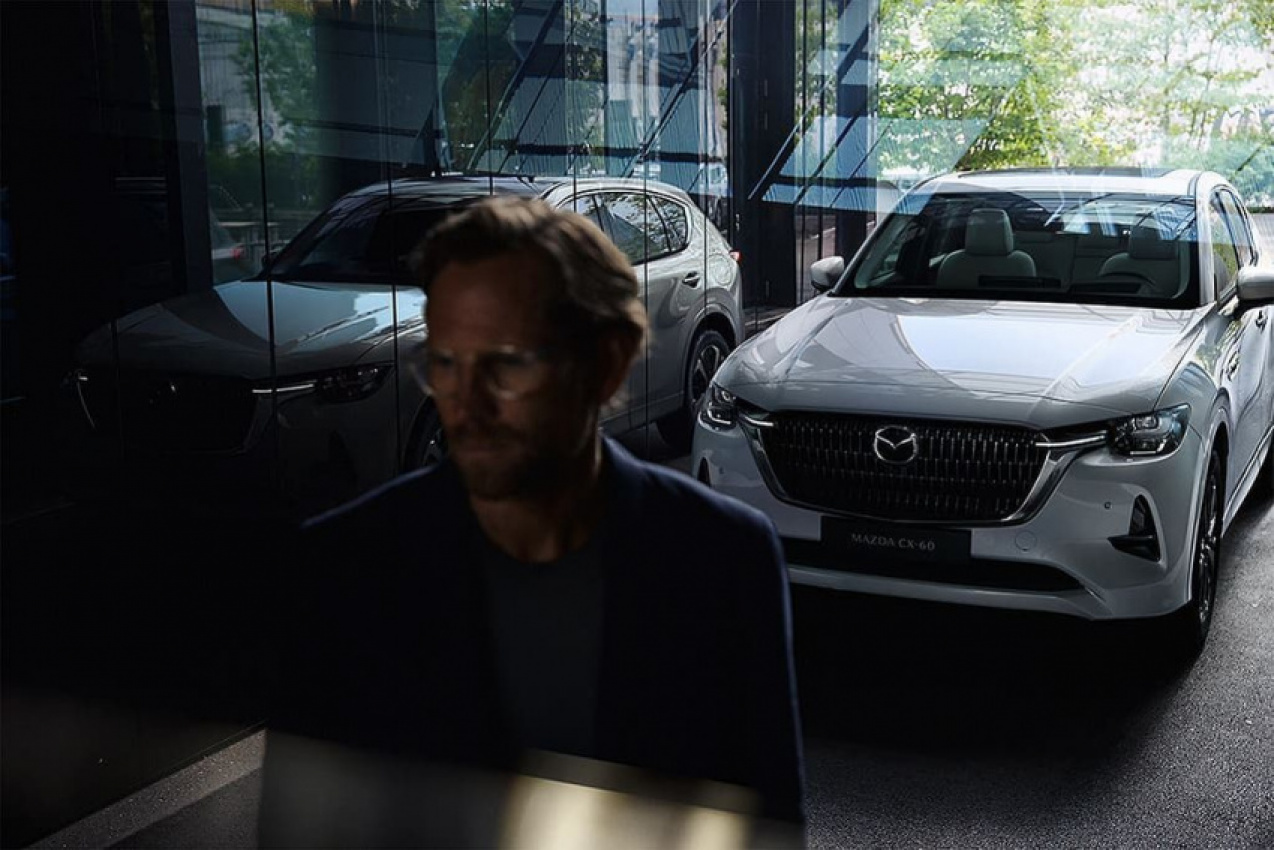 In addition, however, a ‘Through Vew’ 360-degree camera will effectively make the car’s body transparent, using technology similar to that employed by Jaguar Land Rover to reveal objects obscured by the vehicle.

Watch this space for more details. 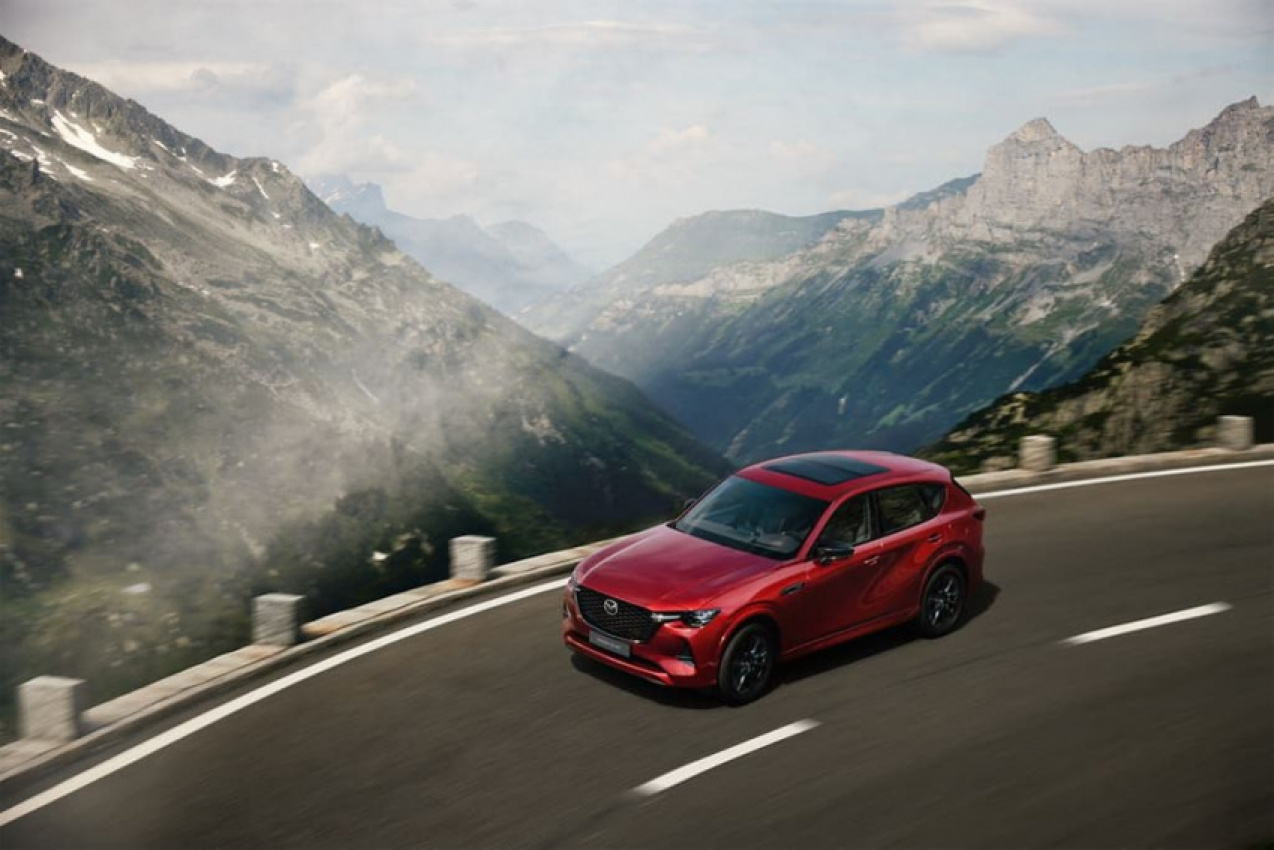