Winter tires make all the difference. 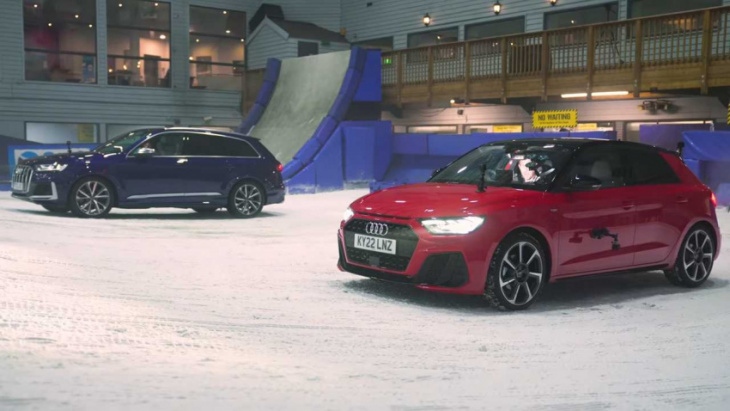 The Audi A1 and Audi SQ7 couldn’t be more different. However, a new Carwow video pits the pair against each other in a series of indoor ski slope drag races. The SUV starts on summer tires, while the hatchback arrives wearing winter ones, giving the A1 at least one advantage over the more powerful SQ7.

The first race up the snowy ski slope was relatively easy for the A1. The hatch crested the hill and passed the cones, leaving the SQ7 at the bottom. The SUV struggled for traction, barely moving from its starting position and losing. In the second race, the SQ7 took a gentler approach, slowly leaving the starting line and making progress up the hill. However, about halfway up, the SUV slowed, struggled for traction, and slid back down the slope, skating into the foam padding at the bottom. Thankfully, the collision didn’t cause any damage.

The SQ7 switched to winter tires for a third race, a game-changer for the SUV. The big Audi launched from the line, its tires spinning and tossing snow as they dug in for traction. It stayed even with the A1 until about halfway up the hill before the SQ7 could pull ahead, crossing the finish line first.

All-wheel drive is great, but tires still matter, as the drag races demonstrate. The SQ7 struggled on its summer tires compared to the Audi A1, but the switch to winter rubber helped the beefy SUV navigate up the slope. It’d eventually make it all the way to the top. All that power under the SQ7’s hood isn’t useful if the vehicle can’t find the traction to put it to the ground.

The most recent photos reveal subtle styling changes for the 2024 refresh.

What does Audi say about this being the next A8? Will the 2024 Audi A8 have the same tech as the concept? What is the PPE EV platform? Just last week we showed you images of the new Audi Activsphere EV concept. It along with the other three Sphere ...

Image: Audi Audi has been working on a couple of important new electric vehicles, including a “tougher all-electric luxury 4×4, and a new concept off-roader that looks more like a small truck. The new luxury 4×4 is set to hit the roads in 2027, and was hinted at in ...

It should debut sometime soon.

Audi Buys Into Sauber F1 Team Ahead of 2026 Entry

Photo: Audi AG Audi has purchased a minority stake in the Sauber Formula 1 team (which is currently doing business as Alfa Romeo F1), as the manufacturer outlined in its plans announced last October. The German automaker is scheduled to join the world championship in three years. The 2026 ...

Indy car racing rode a wave of momentum in 2022 as the NTT IndyCar Series returned to the masses with an exciting on-track product. Heading into the new year, it is important for the series to harvest that momentum and continue to grow – while also working to attract ...

Audi's chief designer Marc Lichte says the Grandsphere is a "very concrete teaser" of the upcoming A8 e-tron production model.

► Audi wants to build a true off-road 4×4 ► ActiveSphere concept gives us design clues ► Platform linked to new Scout sub-brand Audi is planning on building a truly rugged, all-electric off-road SUV to compete with the likes of the Mercedes G-Class (or, more accurately, the upcoming EQG) ...

Audi To Keep E-Tron Name In The Electric Era

Audi activesphere concept is a fastback, SUV and pickup truck

Audi To Invert Design Process By Developing The Interior First