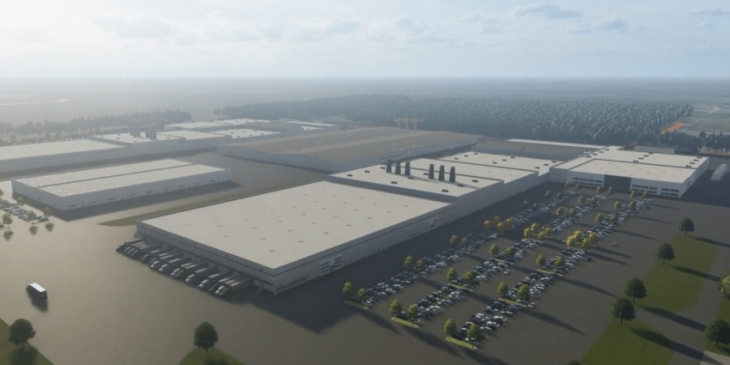 The Norwegian company Freyr has acquired a site for its first battery cell factory in the USA called Giga America. The factory will be built in Coweta County in the state of Georgia and is expected to launch with an annual capacity of about 34 GWh.

The US factory, which was announced last year, will initially require an investment of 1.7 billion US dollars. However, Freyr is already evaluating additional cell production lines and the integration of upstream and downstream production steps, which is expected to bring the total investment to more than 2.6 billion US dollars by 2029. Regarding the land now purchased, Freyr specifies that it is 368 acres (just under 150 hectares) in the Bridgeport Industrial Park in Georgia, including “secured options for further expansion”. The Giga America complex is expected to be “one of the largest battery cell production facilities in the world upon completion of all planned phases of construction,” according to the company’s headquarters.

The US announcement does not come as a surprise: Freyr had already announced in June 2021 that it would build up production capacities in North America via a joint venture (with Koch Strategic Platforms) founded in October 2021 and had previously concluded a licensing agreement with 24M. Based on 24M Technologies’ semi-solid technology, the US factory will produce cells with an initial annual capacity of around 34 GWh.

Construction is already underway in Norway under Freyr’s direction: At the end of June, Freyr’s board had approved the construction of the start-up’s first battery cell factory in Rana, Norway, called Giga Arctic. Production is scheduled to start there in the first half of 2024. The final annual capacity is expected to be 29 GWh.

According to Freyr, the project team in the USA will strongly orientate the planning of the US factory on Giga Arctic. There, cell manufacturing will also be based on the 24M production platform. The Norwegian company says that it is now moving ahead quickly with the US expansion as local funding conditions continue to improve. Freyr is receiving grants from both the state of Georgia and Coweta County, as well as announced production tax credits related to the recently passed Inflation Reduction Act. In addition, Freyr is seeking to submit grant applications to the US Department of Energy “which could potentially include a grant and/or direct loan to support development and potentially accelerate the project”.

“Today’s landmark announcement underscores FREYR’s ambition to develop a very strong and near-term operational footprint in the United States,” said CEO and co-founder Tom Einar Jensen, adding: “Expanding into the U.S. has been a foundational aspect of FREYR’s long-term strategy from our inception, and with the recent passage of the Inflation Reduction Act, we expect U.S. demand for ESS, passenger EV and other electric mobility applications to grow rapidly over the next decade.”

Freyr says it aims to reach a total annual battery cell capacity of 50 GWh by 2025, 100 GWh by 2028 and 200 GWh by 2030. In addition to the plants in Norway and the USA, another production facility in Vaasa, Finland, is under discussion.