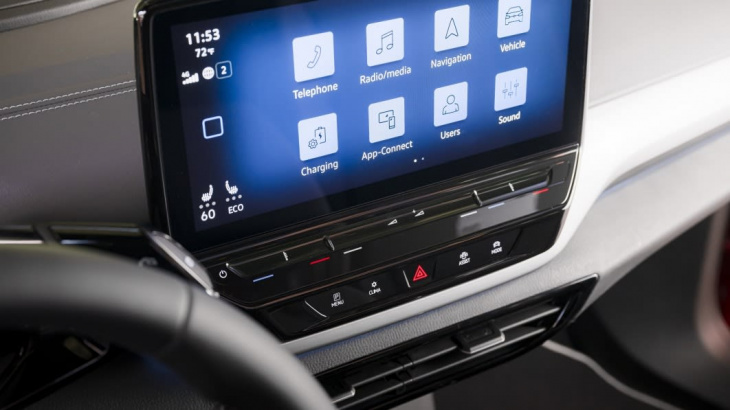 Volkswagen is keeping its promise of making software improvements to the ID.4 crossover. The company announced a comprehensive round of digital updates that includes new features for the infotainment system and more information displayed in the instrument cluster.

The updated software was developed for all 2021 and some 2022 models, and Volkswagen calls it “a prerequisite for future features.” From the driver’s perspective, it adds a percentage that corresponds to the battery’s state of charge, the driving mode selected, a trip computer that displays driving data, and the ambient temperature to the digital instrument cluster. The bundle also includes a feature called Auto Hold that keeps the ID.4 stopped even if the driver releases the brake pedal after coming to a complete stop. This function can be deactivated.

Volkswagen adds that the update also brings minor bug fixes and security improvements. Looking ahead, we’re told that plug-and-charge capability and “additional remote features” will be added to the ID.4, though there’s no word yet on when these will be rolled out.

Owners of ID.4 models eligible to receive the updated software will get a letter from Volkswagen in the not-too-distant future. Motorists will need to take their car to the nearest service center to get the latest software installed, and a company spokesperson told Autoblog that the update will be free. Volkswagen has also instructed its dealers to replace the ID.4’s 12-volt battery as part of a separate campaign.

Additional software- and interface-related changes are in the pipeline. In 2023, Volkswagen will give the ID.3 a mid-cycle refresh that will include a better infotainment system. And, the firm announced buttons will replace the touch-sensitive surfaces on the steering wheel.