American automaker Ford is aiming to play a vital role in the country’s electric future. The Blue Oval has produced two electric vehicle nameplates thus far. Ford makes a Ford Mustang Mach-E small electric SUV and a Ford F-150 Lightning electric pickup truck. The automaker is catching up with Tesla. Here’s why the Cybertruck could change everything.

What ever happened to the Tesla Cybertruck?

The Tesla Cybertruck was first announced in 2019. It has been delayed three different times thus far. The Cybertruck was easily one of the most exciting EV concepts when it was revealed because of its unique exterior design. Today, many consumers are skeptical about the electric pickup truck’s actual release date. The Cybertruck’s design had some fundamental issues that the brand needed to address before mass producing it. Visibility was a prominent issue.

Tesla fans expect the innovative electric pickup truck to arrive sometime in 2023 as a 2024 model year. While a 2023 arrival would be much later than originally expected, Tesla’s timing couldn’t be better considering the closing gap between the company and other automakers.

Tesla may be in its infancy compared to some more established automakers, but it’s a seasoned producer of electric vehicles. That being said, the company shouldn’t get too comfortable at the top, because rivals are gaining on it.

Ford is producing some of the most impactful American electric vehicles

The Mach-E is practical, but it also offers exciting driving dynamics and an attractive exterior design. It won the hearts of many Blue Oval fans despite being met with skepticism early on. Some drivers didn’t believe an EV was worthy of being associated with the mighty Mustang nameplate…until its performance specs were released.

The Mustang Mach-E made plenty of headlines when it first hit the scene. Since the small SUV vehicle segment is the most popular vehicle segment in the country, it makes sense that the small electric SUV vehicle segment could become very popular in the future. The Mach-E paved the way for another groundbreaking Ford EV, the Ford F-150 Lightning. The Ford F-150 Lightning quickly sold out when it became available. It’s currently one of the most popular electric pickup trucks on the market.

The Tesla Cybertruck could keep Ford at bay 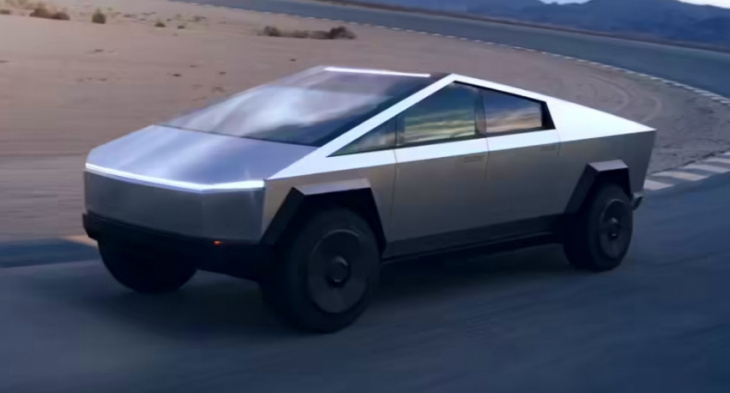 According to CNBC, Ford is is second to Tesla in electric vehicle sales. The American automaker beat out companies like Hyundai for the second-place position.

Tesla still sells far more EVs than Ford, but that gap could close as the Blue Oval rolls out new electric vehicle nameplates in the next few years. Elecktrek claims that Tesla has received 1.5 million pre-orders for the Cybertruck. If even a third of drivers that pre-ordered the truck end up completing their purchase, then Cybertruck orders will be backed up for years to come.

So, the Tesla Cybertruck could widen the gap between Tesla and Ford. Tesla’s odd truck is becoming increasingly important to the brand as its release date draws nearer.

Keyword: Ford Trails Tesla In EV Sales, the Tesla Cybertruck Could Change Everything