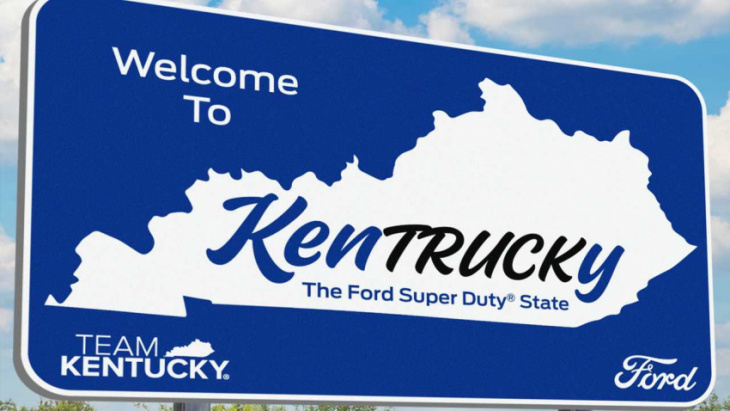 Here’s an unexpected bit of news. Kentucky Governor Andy Beshear proclaims that Tuesday,  September 27, 2022, is KenTRUCKy Day. The odd decree is in honor of the 2023 Ford F-Series Super Duty debuting that day at Churchill Downs, which is the home of the Kentucky Derby.

“To honor Ford’s investment and this great Team Kentucky partner, I have officially proclaimed, September 27, 2022, KenTRUCKy Day in the commonwealth,” Governor Beshear said. “Kentuckians have been building Ford trucks since the Model T, and we are thrilled this tradition is going to continue with the all-new Ford F-Series Super Duty.”

Judging by spy photos, the new Super Duty has an evolution of the front-end styling from the truck’s current generation. There’s a broad grille and stacked headlights on each side. Bracket-shaped running lights are on the outer edges.

We still don’t have interior shots of the new Super Duty. It reportedly gains a 12-inch infotainment screen like the one on the F-150. The higher trim levels allegedly get a digital instrument cluster.

Ford will continue to offer the new Super Duty in a variety of trim levels, like XL, XLT, King Ranch, and Platinum. To differentiate them on the outside, expect the various grades to have tweaks like different grilles and wheel designs.

Under the hood, the Super Duty reportedly gets a new 6.8-liter V8. It might replace the existing 6.2-liter mill in the lineup. The 7.3-liter V8 and 6.7-liter Power Stroke diesel should remain available.

The truck is reportedly still available with a 10-speed automatic. The gearbox might have some improvements.

Following the premiere on September 27, look for the new Super Duty to be on sale in the first half of 2023.

Ford has quite a footprint in Kentucky. The company employs more than 12,000 people there. It also has a collaboration with SK Innovation to build a $5.8 billion battery production park in Glendale, KY. When the site begins production in 2025, the two factories on the campus would make a total of 86 gigawatt-hours of packs each year.