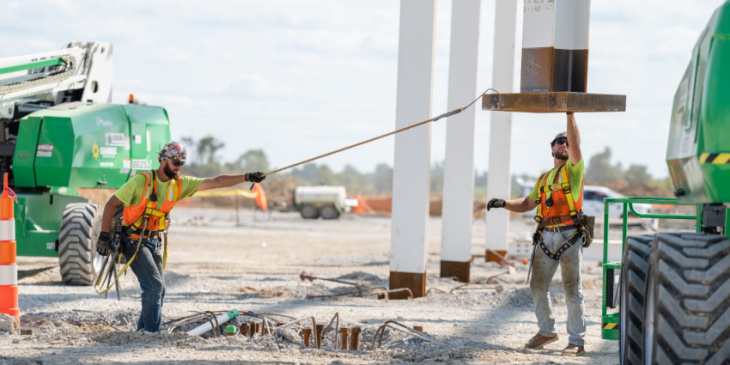 In the US state of Tennessee, construction work has begun on the first joint battery and electric car factory of Ford and SK On. A new all-electric pickup truck and batteries for electric vehicles from Ford and Lincoln are to be produced there from the planned opening in 2025.

Ford announced plans to invest $11.4 billion in the facility about a year ago with its battery partner SK Innovation to build two new sites with assembly and battery plants in Tennessee and Kentucky. About $5.6 billion had been earmarked for BlueOval City in Tennessee.

The ground-breaking ceremony marks the beginning of the actual construction work for the campus, which will cover the equivalent of 15.5 square kilometres (original specification: 6 square miles), but the first excavators already rolled in in March. In the course of the preparatory work, 3.5 million cubic metres of earth have already been moved and 370,000 tonnes of stones laid, as Ford now reports. And important for the construction: more than 4,600 deep foundations were installed, which will then support the actual construction.

The term ‘ground-breaking ceremony’ is used more symbolically here, as Ford’s press photos show that the first constructions made of structural steel can already be seen erected on the site. Ford does not specify when the construction work is to be completed. All that is known is the planned start of production at the plant, which is to take place in 2025.

The BlueOval City with the integrated battery and vehicle plant is then to become the largest and most advanced car production complex in the company’s 119-year history. Around 6,000 new jobs are to be created in Stanton in the US state of Tennessee.

“We are building the future right here in West Tennessee,” says Eric Grubb, Ford’s director of new construction. “This facility is the blueprint for Ford’s future manufacturing facilities and will enable Ford to help lead America’s shift to electric vehicles.” By 2026, Ford aims to build more than two million electric cars a year worldwide – including products from BlueOval City.