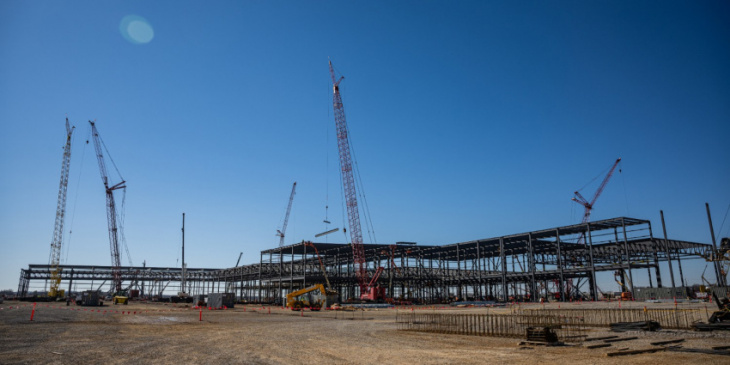 BlueOval SK, the battery joint venture between Ford and SK On established in July 2022, has begun construction of its electric car battery production campus in the US state of Kentucky.

Two battery factories with annual capacities of 43 GWh each for Ford and Lincoln electric cars are being built at the BlueOval SK Battery Park in Glendale. The opening is planned for 2025. Both partners had announced the total of four eMobility plants in Kentucky and Tennessee in September 2021 – and already specified Kentucky as one of the locations at that time.

For the two adjacent factories on the 1,500-hectare battery production complex, both partners are investing a combined $5.8 billion – the largest single investment in the state to date. The groundbreaking ceremony was attended by more than 400 state, county, business and resident representatives, according to SK, including Governor Andy Beshear.

According to the press release, earthworks and steel construction are already underway at the site. In addition, the timetable for 2025 is somewhat concretised: All construction and installation work is then to be completed in the first quarter. “After test runs”, the batteries for Ford and Lincoln are then to be produced – but a more precise timeframe for the transition from test to series production is not mentioned. 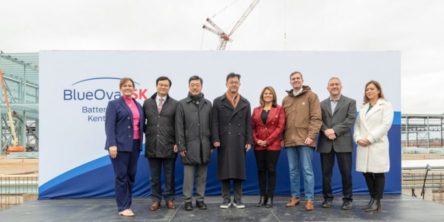 “Right here in Kentucky, Ford and SK are joining forces to lead the future of the EV industry,” said Chey Jae-won, Executive Vice Chairman, SK Group. “We will be manufacturing the safest and the most reliable batteries in the world. Over the next two years, BlueOval SK will build the biggest and most advanced plants for EV batteries, and Kentucky will become a vital centre for the future of clean mobility.”

By the end of September 2022, construction had already begun in the US state of Tennessee on a joint battery and electric car factory between Ford and SK On. In total, three BlueOval SK battery plants are to produce 129 GWh annually. The company calculates that this will be enough “to power approximately 1.2 million units of the Ford F-150 Lightning, the electric version of America’s best-selling pickup truck”.

In addition to BlueOval SK’s three plants, the Korean company already operates a 9.8 GWh battery plant in Georgia (including for the ID.4 in Chattanooga and the F-150 Lightning) through subsidiary SK Battery America, with another 11.7 GWh plant coming online next year. In addition, SK refers in the announcement to the recently concluded letter of intent with the Hyundai Motor Group – for this production “after 2025”, however, the location and delivery volume still have to be determined, according to SK.