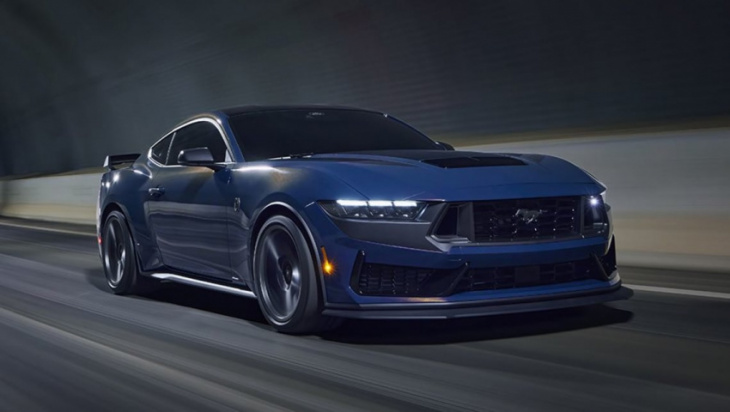 More powerful than the Mustang GT, the Dark Horse is coming to take on the best sports cars in the world.

Ford is done competing against just its American muscle car rivals and has set its sights on taking on the world’s best sports cars with an all-new member of the Mustang line-up – the Dark Horse.

The first new performance nameplate for the Mustang line-up in two decades, the Dark Horse was a surprise addition to the public reveal of the new 2023 Mustang in Detroit today. It will sit above the V8-powered GT model, but below the Shelby, effectively filling the role played by the special-edition Mach 1.

The Blue Oval brand isn’t making any secret about its intention with this new model, targeting Europe and Asia’s best “premium brands” on both the road and track.

“For decades, Mustang has competed against the most premium brands on the greatest world stages and won,” said Jim Farley, CEO of Ford Motor Company. “We surprised everyone, and we’re going to surprise them again with a track-capable Mustang that puts a new level of performance, styling and American engineering in the hands of everyday customers who still want the thrill and excitement of a V8 sports car.”

The key feature of the new Mustang Dark Horse is the most powerful version yet of the 5.0-litre V8 ‘Coyote’ engine, as well as boasting the same six-speed manual gearbox from the Shelby GT500 and the MagnaRide adaptive suspension.

Other unique elements include additional brake cooling NACA ducts, an auxiliary engine oil cooler, a rear axle cooler and a unique radiator design – all of which has been done to improve its track performance.

The engine features the same upgrades as the one found in the new GT, but gets some special elements of its own, including Shelby piston connecting rods to ramp up power to 372kW (500hp); or at least that’s what Ford said it’s targeting.

Ed Krenz, the chief nameplate engineer for the Mustang, said the Dark Horse was designed to elevate the car beyond its pony car status by improving every area of performance.

“We’ve taken the all-new Mustang, the best of our new 5.0-liter V8 performance, and added power, improved the aero, tires, steering and provided an interactive cockpit to create a Mustang that goes beyond any 5.0-litre Mustang before it,” Mr Krenz explained. 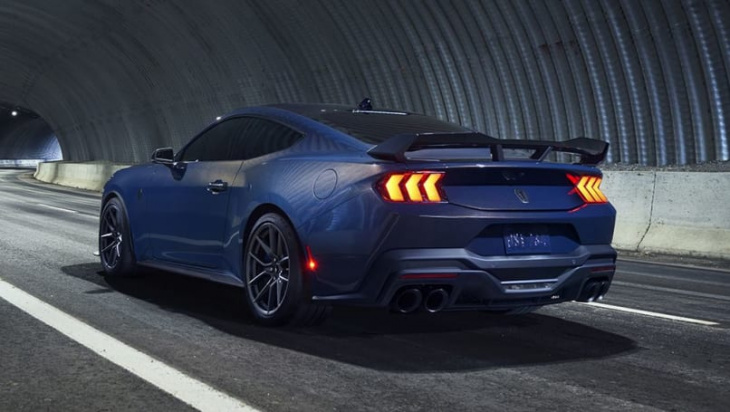 The Dark Horse will fill the gap left by the special-edition Mach 1.

He added: “It’s more than a new name. Dark Horse brings a new design language to Mustang that is refined yet perfectly suited to its dual purpose of street and track performance.

“The visual changes, both inside and out, message that Dark Horse has a directed performance focus. The mechanical changes reinforce the purpose of Dark Horse, providing the driver with increased confidence and competence.”

Ford Australia has confirmed that the Dark Horse will be available as part of its line-up but hasn’t made it clear if it will arrive with the GT and EcoBoost in the final months of 2023, with details under wraps until closer to launch.

A Ford Australia statement read: “With the introduction of the seventh-generation Mustang, Ford Australia will add an exciting new special edition nameplate to the Mustang stable, Dark Horse… With sinister looks and a specially modified 5.0-litre V8, Dark Horse will set a new benchmark for Australian street and track performance.”

It has just as much real-world pace as a car with twice the power and several hundred pounds of extra ballast.


View more: The Porsche Carrera T Unlocks What You Want in a 911

The Value Pick? Hybrid or Non-Hybrid Medium SUV or pickup truck? For many buyers of either one, the choice is straight forward and there’s little consideration of the alternative. But in other cases, the two offerings can be remarkably similar—enough that it can be hard for a buyer to ...

The 2022 Tundra Capstone is expensive to buy and to drive Why do Americans love full-size trucks? There’s no getting around it, full-size pickup trucks are extremely popular in the United States. Although most drivers would be better served by a sedan or SUV, there’s just something special about ...


View more: The 2022 Toyota Tundra Capstone Is Hard to Hate but Not Great on Paper

It means that the WEC teams are scheduled to have their cars ready for round three at Spa and the IMSA squads not until round four at Laguna Seca at the earliest. The British Jota team, which claimed its third Le Mans LMP2 victory this year, was the first customer team to ...