Ford has just made carrying long loads in the new Ranger both easier and more stylish, thanks to a new rack system it has revealed for the new Ranger ute that it calls the Flexible Rack System.

Consisting of what initially appears to be a pair of “lifestyle” accessories, ie: slick matte black roof rails and a matching sail-style sports bar on the tray, they system is actually way more functional than its lifestyle-y looks suggest – the roof rails have integrated crossbars that swing out to form a roof rack (similar to the system Subaru utilises on the Outback), while the sports bar also has a pop up crossbar that matches the height of the roof rack crossbars and can actually slide along the tray, allowing owners to load items spanning the length of the roof and tray. 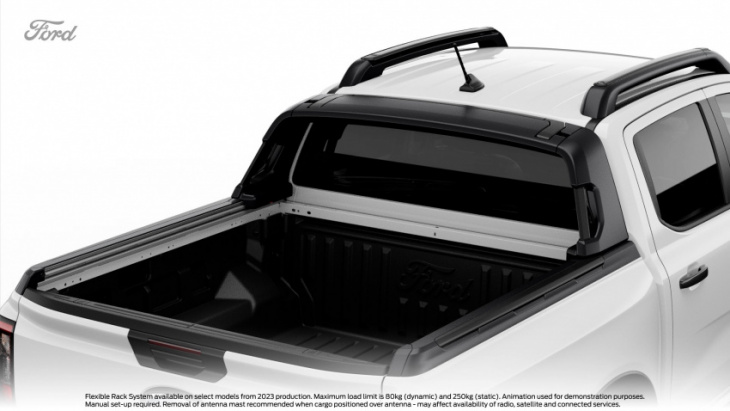 Developed by Ford Australia engineers in collaboration with JAC Products, the system can be operated by just one person, with the “Sliding Load Rack” (what the company calls the sport sbar component) running on a C-shaped channel mounted to the top of the load box sidewalls and able to be locked in five different positions allowing for the secure support of different length items.

Unlocking the Sliding Load Rack on one side automatically releases it on the other side, allowing it to slide easily in the rails. Ford says a system of four roller bearings angled at “a precise 37-degrees”, retractable stabilisers and locks ensure easy movement when unlocked but prevent the Sliding Load Rack from moving when locked in position.

Because the cabin and tray of a pickup move independently of one another, the development team engineered the Sliding Load Rack with a degree of compliance, meaning its 80-kilogram dynamic load limit applies on and off-road, while the static capacity is rated at up to 250 kilograms, meaning it can support a roof tent.

“We learned from our customers that they would load things like canoes into the load box and then lean them up against the sports hoop before tying them down. This was awkward and meant the load box couldn’t really be used for storing anything else a customer might want to take with them,” said Danny Trentin, application specialist, Ford Ranger. 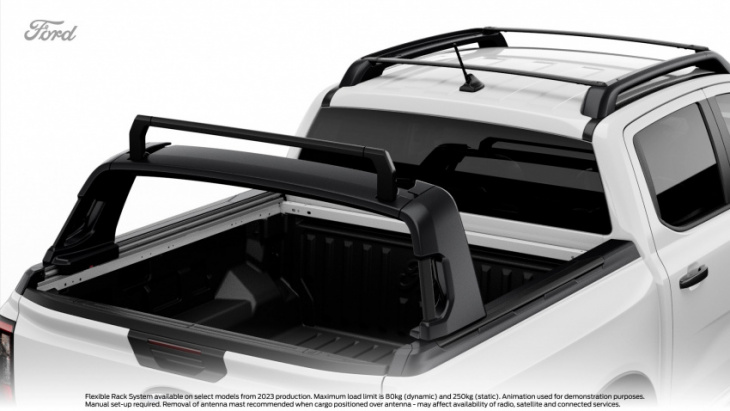 “We also learned of their frustrations when it came to carrying items of longer lengths. With an 80-kilogram dynamic load limit, the Flexible Rack System eliminates those frustrations,” he said.

While being flexible and functional is all fine and well, Ford determined early on that, as an item that can be moved along the load box, the Sliding Load Rack had to look like it belonged no matter where it was positioned.

“We wanted the Sliding Load Rack to ‘belong’ on Ranger, no matter where it was positioned,” said Max Tran, chief designer of the Ranger. “It needed to be functional, of course, but it also needed to match and complement the shape of Next-Gen Ranger while being user friendly and as quiet as possible when deployed.”

While looking good was important, being tough was even more important, so Ford put the Flexible Rack System through some serious testing to ensure its durability. 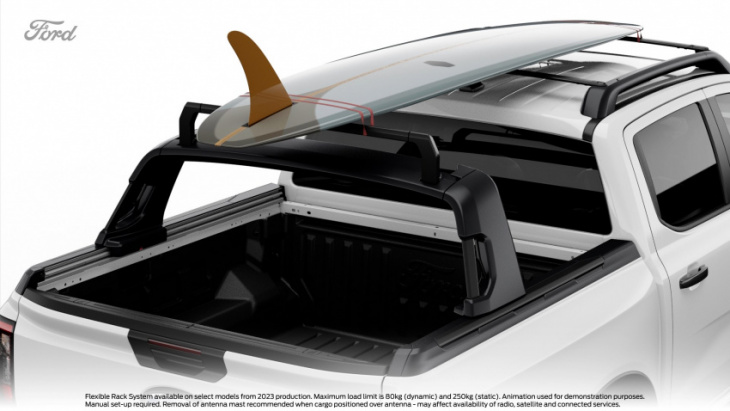 . The FRS was tested at full load and completed 77 runs on the track, passing with flying colours. It completed 400 runs with no load,” said Nik Tibhuvan, senior engineer at Ford Special Vehicle Engineering.

Fragile loads were also secured to the Sliding Load Rack. The vehicle and ‘fragile load’ were then repeatedly run across smooth and uneven surfaces, twist ditch and gutters to ensure the system worked with a variety of solid and delicate loads.

“We tested the system with bulldust, red dirt, salt and water, to replicate the sort of real-world grit and muck owners will encounter,” said Tribhuvan. Once covered in filth, the sliding rack was cycled more than 3500 times to replicate approximately 10 years of use.

Ford says that cleaning of the system is simple, with drainage holes in the track allowing owners to simply hose the channel out.

Ford says the Flexible Rack System will make its market debut on “select Ranger models” in 2023. 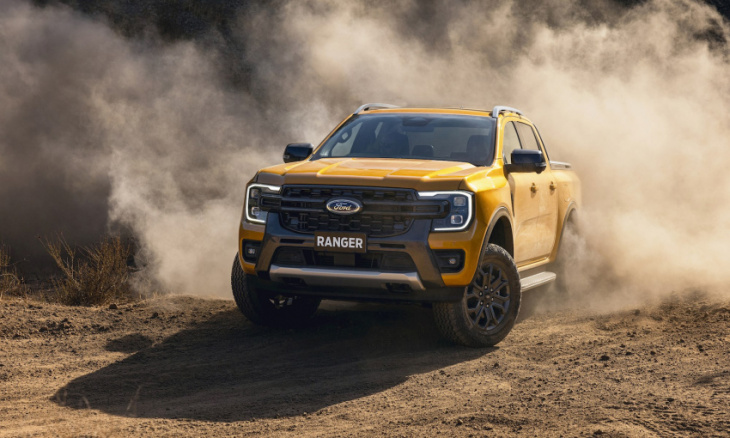 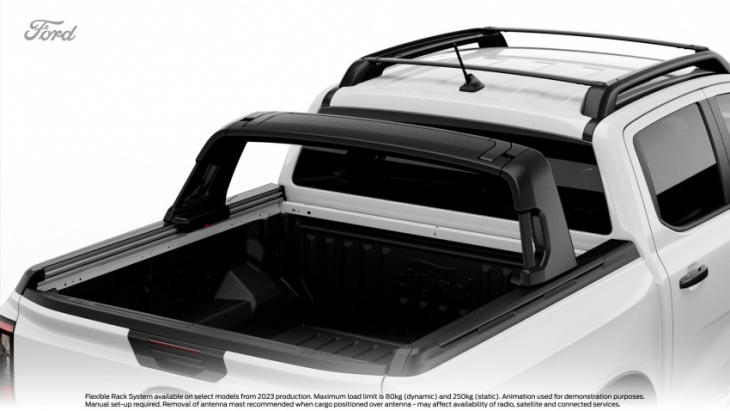 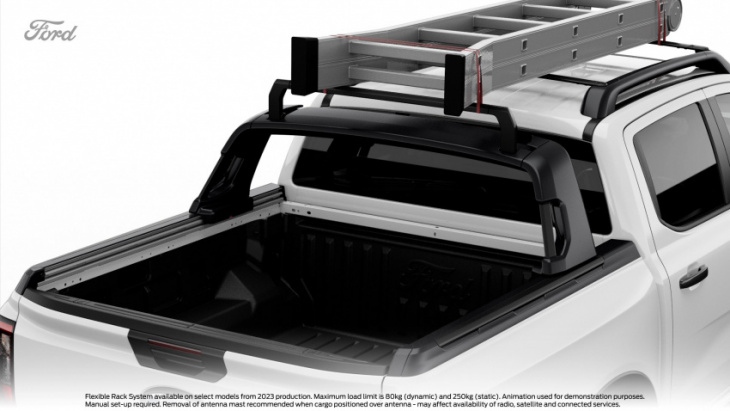 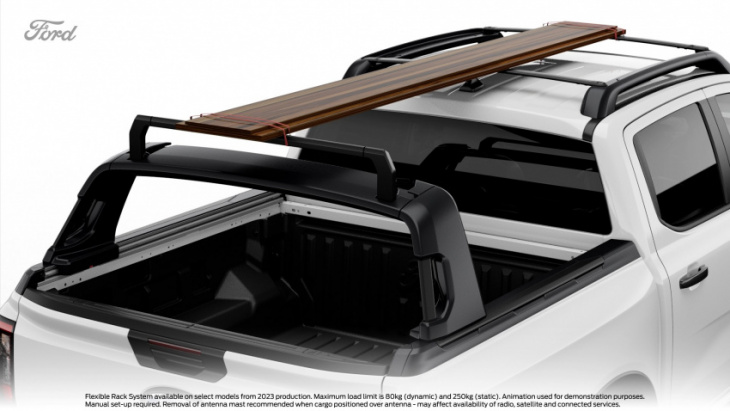 Keyword: Ford gets flexible (and stylish) with the new Ranger ute