Supercharged V8s for the win! 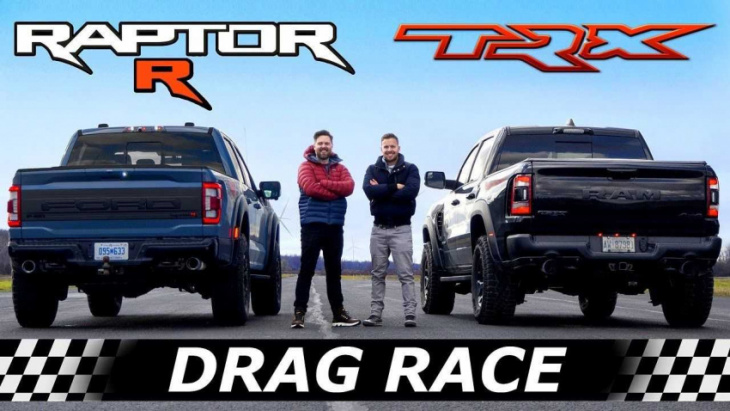 The day has finally come, friends. The moment we will learn which one between the two most hardcore and potent trucks on the North American market is quicker in a drag race. For many, this is probably unnecessary but for Ford and Ram, this is a matter of honor. Thanks to the Throttle House channel on YouTube, we finally have the chance to see the two top-of-the-line pickup trucks against each other in a direct drag race.

In battles like this, it all comes down to the numbers – and they are pretty impressive for both competitors. The Ford F-150 Raptor R has a supercharged 5.2-liter V8 generating 700 horsepower (522 kilowatts) and 640 pound-feet (867 Newton-meters) of torque available from 4,250 rpm. That’s the same Predator V8 also found under the hood of the Mustang Shelby GT500 but in this application, it has a 2.65-liter supercharger fitted with a smaller pulley – 74 millimeters versus 80 in the GT500. Hence the difference in the output between the Raptor R and the GT500.

Ever since the debut of the Raptor R, nearly everyone has been noting the truck is short on power compared to the Ram TRX – and even Ram made fun of that fact, even though the difference between the two trucks is just 2 hp (1.47 kW). The TRX also peaks at 650 lb-ft (881 Nm), so any way you slice it, Ram’s hardcore truck is the undisputed king of power in the off-road muscle truck segment. However, the Raptor R is some 400 pounds (181 kilograms) lighter and this could be decisive in drag races like this one.

There’s one more interesting comparison that we’d like to point out before kicking off the actual race. The F-150 Raptor R has a starting price of $109,415 in the United States and $146,005 in Canada. The TRX, in turn, is significantly cheaper, starting at $78,790 in the US and at $108,790 in Canada. But which one is quicker? Watch the video at the top of this page to find out.

General Motors has kicked off the implementation of its “Dealer Community Charging Program” announced a year ago to build up to 40,000 AC charging stations by dealers in the US and Canada. The first of these charging stations have now been installed in Wisconsin and Michigan. So far, nearly ...


View more: The Most American-Made Vehicle Isn’t a Ford Mustang Anymore for 1 Reason

2024 Ram 1500 Revolution Rendering Is A Look Into The Future

This Ram Revolution rendering is based on the numerous teasers shared so far and we say it’s pretty accurate.

If the US government wants its citizens to switch to EVs, it's time the government makes the switch and publicizes the successes.

2021 Ducati Scrambler Nightshift: A Classic Gets a Stealthy Makeover

Ram teases “Revolution Electric” ute due to be unveiled in January